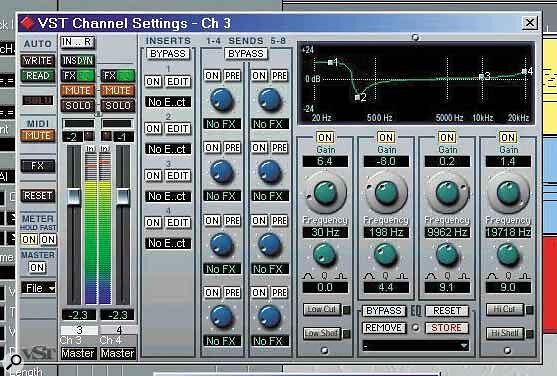 If you have enough screen space, keeping a VST Channel Settings window open all the time can be a real time‑saver, since it can be updated to display settings for whichever channel you're working on.

When you work with a complex program such as Cubase VST, it's easy to overlook the hundreds of small features that are there to make your life easier.

Although most Cubase users will be familiar with the VST Channel Mixer and other VST‑prefixed parts of the program, since the early days these have always included many little features which aren't always documented or immediately obvious. So if you hadn't guessed already, these tricks are exactly what we'll be looking at in this month's exciting 'fiddly little things you never knew about the VST windows that can make your life easier' Cubase Notes. 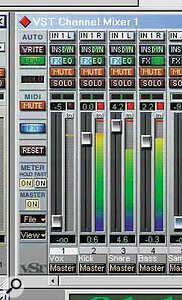 Holding down Shift while dragging the faders in the VST Channel Mixer allows you to make fine adjustments more easily.

The faders for setting audio levels and pan positions on the VST windows are probably the most commonly dragged objects, and yet, because of the obvious limitations of mouse‑related movements, it can sometimes be difficult to get the accuracy and smoothness required. By Shift‑dragging the faders on both Windows and Mac versions, the movements are slowed down to give you much greater control. You'll notice that I'm talking about faders, rather than just controls, and that's because the Shift‑click trick only works for faders and not the rotary controls. The way the rotary controls work in Cubase is a little quirky, as you've probably found.

To adjust the value of a rotary control, you drag the mouse around the control. An interesting thing to note is that once you've clicked the mouse button on the control you're adjusting, the further away you drag the mouse from the control, the slower the movement of that control. This is one of those features that takes a fortnight to explain and roughly two‑seconds to see! But it's very useful for fine‑tuning those send effects levels and VST EQ parameters.

Another trick, which you might already be familiar with, is to Ctrl‑click (or Apple‑click on the Mac) VST controls to reset them to their default value. For example, volume faders are reset to 0dB by Ctrl/Apple‑clicking them, pan controls are reset to the centre position, and the VST EQ and send controls also respond accordingly to this command. And in case you were wondering, these neat little tricks for Shift‑dragging and Ctrl/Apple‑clicking controls also work in the MIDI Track Mixer.

The left and right halves of most features on stereo channels can be adjusted independently by holding down modifier keys while moving them. 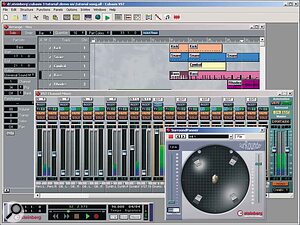 The way Cubase handles stereo tracks can often take a few moments to get your head around, and figuring out how to make the resulting linked channels on the VST Channel Mixer do what you want can be equally frustrating.

When stereo mode is activated on a pair of audio channels, any alterations to one channel are automatically applied to the other fader — try dragging the volume fader on one channel to see what I mean. To move the left or right channel's volume fader independently, simply Alt‑drag (or Alt/Option‑drag on the Mac) the volume fader you want to adjust. It's also possible to Alt+Shift‑drag and Alt+Ctrl/Command‑click the faders, but as soon as you make an adjustment without the Alt/Option key held down, both faders are set to the new value.

It's interesting to note that, with the exception of the pan controls (which operate independently anyway), this trick of Alt/Option‑dragging a VST control also works for changing FX, VST EQ and VST Dynamics settings independently on linked left and right channels. And here's a curious thing: Alt/Option‑dragging a control on a standard unlinked channel has the opposite effect. For example, adjust a parameter on mono channel 1 with Alt/Option held down, and the same parameter is automatically set on channel 2.

Supposing you want to bypass the send effects on multiple channels on the VST Channel Mixer, how do you do it? Go through each channel one by one in the VST Channel Settings window clicking the bypass button? You must be joking!

To bypass the send effects on a given channel, simply Ctrl‑click (or Apple‑click on the Mac) the FX part of an FX/EQ button, and then, to switch them on again, do exactly the same so the FX section lights up once more. And before you ask the inevitable question, yes, you can Control/Apple‑click the EQ part of the FX/EQ to toggle the bypass for the VST EQ section, and by Ctrl/Apple‑clicking the parts of the INS/DYN button, you can toggle the bypass for the Insert effects and VST Dynamics on a given audio channel. This is an incredible time‑saver and works for the FX/EQ and INS/DYN buttons on both the VST Channel Mixer and the Inspector for a selected audio track. It also works on the VST Channel Settings window where it's perhaps less useful, although it does allow you to bypass the VST Dynamics while the VST EQs are displayed, and vice versa.

The eight stereo group channels provided on the VST Channel Mixer can be incredibly useful in a variety of situations. To start with a fairly standard example, you can use them for submixes by simply setting the output of a channel on the mixer to a group. Possibly the most common use for a submix is when you have any kind of drum kit spread out on many different channels: being able to route all these channels to a group so you have an overall volume control, without having to alter all the individual levels, is very handy.

In addition to providing an overall volume control, you can also add the usual insert effects, VST EQs and send effects, just as you would on any other channel. Again, in the example of a drum submix, you might want to add a limiter (I often find myself using the Waves L1 here) or other dynamics plug‑in. If you want to use the VST Dynamics, though, you'll have to add them manually as an insert plug‑in since they're not provided as standard features of the group channels for various technical reasons.

A common complaint by Cubase users is that it's not possible to chain multiple send effects together. Although it's been briefly explained here before, this is another example when group channels can come to the rescue. Simply set up some insert effects on a group channel (such as a reverb followed by an EQ or a gate) and then set the routing of a send control to that group channel. If you're not sure how to do this, click on the label underneath a send control in the VST Channel Settings window and choose the required group channel from the pop‑up menu.

You'll notice that since VST uses mono send busses, the left and right channels of a group appear separately in the list of possible send destinations, and for normal effects you can just send to the left channel. However, if the effect plug‑in you've inserted in a group uses a stereo input, you could have a send from one channel feeding into the left channel of that group, and the send from another feeding into the right channel. This isn't as bizarre as it sounds given that some plug‑ins can treat either the left or right input as a control signal.

Another interesting thing to note is that while you can set the output of a group channel to any available physical output, such as the master or any of the other activated busses (if you have a card with multiple outputs), it can also be set to another group channel. So in this way, it's actually possible to chain the output through multiple groups if you should need to. And if that idea appeals to you, it's also possible to feed a group back on itself by, for example, choosing group 1 as a send effect for the group 1 channel. So although at face value Cubase appears not to have the complex routing possibilities of other packages, applying a little perverse logic can help you achieve most goals.

There have been many junior versions of Cubase over the years (remember Cubeat and Music Station, among other casualties?), but Cubasis VST has been the most successful and the Windows version has recently undergone a major update to version 3.0. Anyone who uses Cubasis 2.0 should upgrade immediately, but if you're just getting started with the world of Cubase, or you need a less powerful version for a second machine (especially in schools), Cubasis 3.0 is worth investigation.

Version 3.0 includes the redesigned look and feel introduced in Cubase 5.0, and although the feature set is trimmed relative to the full version, it is a very usable package. Cubasis also features a standard Windows toolbar allowing access to common functions and windows, rather than the irritating floating‑window variety found in Cubase — something I actually miss when returning to the big brother.

The only really noticeable omission is the removal of Cubase's Audio Editor. When you double‑click an audio part in Cubasis, you're presented with the Wave Editor — although this is actually an externally launched copy of Wavelab Lite 2.0, which more than makes up for the loss.

The other major selling points of version 3.0 include a consumer‑oriented four‑speaker surround plug‑in (which can only be used on the master buss — you don't get surround pan controls for each channel) and an extensive tutorial. The tutorial, which takes the form of an online help file, is a welcome addition and guides new users through the basic functionality of the program, with the aid of a demo song, and then assists in the process of making the first MIDI and audio recordings.

Cubasis 3.0 is available for Windows in two flavours, VST and Go, which are priced at £59.95 and £29.95 respectively. The Go version allows fewer tracks, includes only one VST Instrument (the Universal Sound Module, which is hard‑wired so you can't use any other VST Instruments), and allows only 20 demo encodings for the built‑in MP3 encoder (with full use being activated with a small additional fee). Mark Wherry

Although less common since version 5, it's still possible to see the dreaded 'No More Channels' alert when adding a VST Instrument, especially if you're using multiple instances of a plug‑in like HALion which provides multiple outputs. This usually happens if you have applications that add a large number of potential ReWire channels, such as Unity DS1 or Reason, and you may have to try uninstalling one of these temporarily to have more mixer channels available for VST Instruments.

Double‑clicking the label underneath a send control on a VST Channel Settings window opens up the VST Send Effects window.