Why Upgrade To Windows 7?

Not everyone has yet made the leap to Windows 7, so if you're a musician, what are the benefits of upgrading?

Currently, the SOS forums seem awash with posts from musicians enquiring about the benefits (or not) of upgrading to Windows 7. Most users who have taken the plunge are agreed that Windows 7 is more pleasant to use, runs significantly more smoothly than Vista, and has various useful new non‑audio bells and whistles. So, yes, Windows 7 is proving very good for music production and, if all your hardware now has compatible drivers, it certainly makes sense to go for it on a new PC.

However, upgrading an existing PC for the sake of it is another matter, and it's important to stress that, in raw performance terms, Windows 7 is unlikely to offer any audio benefits over Windows XP. One user quite rightly pointed out that if you have a streamlined audio‑only system that just runs your sequencer, you may as well stick with XP.

As I've stated before, there is one major exception to this scenario, which is if you're already using loads of samples in your music and are running into voice polyphony restrictions due to the Windows XP 32‑bit usable limit of around 3GB of system RAM. In this case it really is worth upgrading to Windows 7 64‑bit and installing more system RAM (6GB will probably do the trick) for increased maximum polyphony. 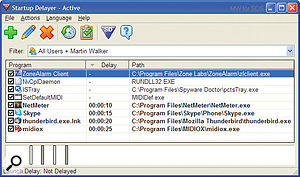 Delaying non‑essential tasks with Startup Delayer can result in your PC being ready for duty sooner than expected.

It can be frustrating waiting for your PC to finish booting up before you can do anything, which is why Microsoft have put so much development time into speeding startup in their latest Windows 7 operating system.

Unfortunately, whatever the operating system, PC startup times tend to increase over time because so many applications add startup tasks to the list. One of the tricks used by Windows 7 is to defer the loading of various tasks that aren't immediately needed, so that your PC feels responsive more quickly.

If, like a lot of musicians, you're still running Windows XP, 2000, NT4 or 98, Startup Delayer (found at www.jockersoft.com) is a handy freeware utility that provides deferred startup of any utilities or applications that are normally run as soon as Windows arrives at the desktop. It displays a 'time chart', where you can drag and drop applications and subject them to startup delays ranging from a few seconds to several hours. This avoids the normal log-jam that generally results in a lot of CPU, RAM and hard drive activity and a non‑responsive machine.

Startup Delayer can be run automatically each time you boot, in which case Internet‑enabled PCs should have their Firewall and similar utilities started as soon as possible. It can also be run on demand, which could be an ideal approach for musicians who want a stripped‑down system for music creation, but then want the option of running a whole string of things in the correct sequence (Firewall and anti-virus software, for example) before they visit the web. You can add your choice of programs to the list at any time, decide whether they appear normally, minimised or maximised, and re‑order/re‑time them at will.

I haven't noticed any further reduction in the startup time on my own machine, because it's already pretty streamlined, but I have, nevertheless, found Startup Delayer invaluable for ensuring that startup tasks happen in a specific order on every boot, so that their icons now always appear in the same sequence in the Startup tray.

It may not offer visions of the future, but Prophecy will certainly help Reaktor users keep their audio levels under control.

Reaktor PRoPHeCy: If you're one of the multitude of Native Instruments Reaktor users, you might be interested in a contribution to its on-line user library from SOS contributor Simon Millward (http://co.native‑instruments.com/index.php?id=userlibrary&type=0&ulbr=1&plview=detail&patchid=9298). PRoPHeCy is an acronym for Peak, RMS, Phase and Crest, and is a stereo metering ensemble featuring peak and RMS meters with Bob Katz's K-system scaling, plus a host of other options.

Gulftown Update: Back in PC Notes March 2010, I reported on the imminent arrival of Intel's first six‑core processor, codenamed Gulftown. The Core i7 980X model, clocking in at 3.33GHz, has now been in the hands of various audio PC developers, and my sources tell me that the news for musicians is good, with very encouraging performance for power users whose needs are beyond the norm.

RME Babyface: Many PC users have looked enviously at Apogee's small but impressive Duet audio interface, with its high‑grade mic preamps and audio quality, but have been disappointed that Apogee no longer develop PC drivers for their products. However, RME's Babyface should put a smile back on their faces, because, as well as sporting a pair of "reference class” mic preamps and what is said to be excellent conversion quality, this 'designer‑styled' compact interface supports both Mac and PC.