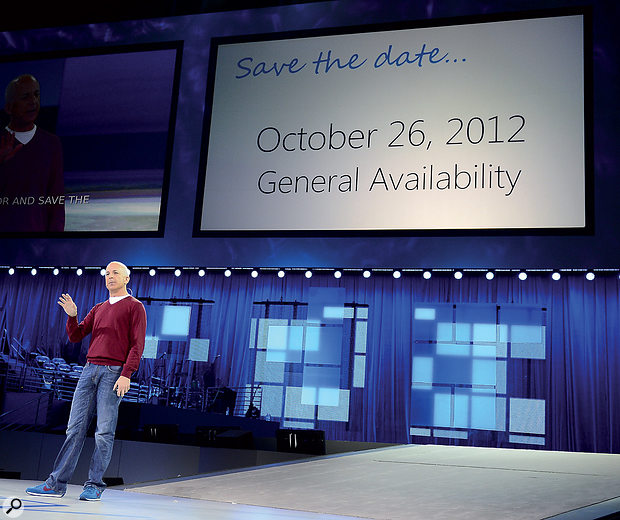 With a release date for Windows 8 finally announced, should musicians take advantage of upgrade offers?

Following the news that the official release date for Windows 8 is now confirmed as Friday October 26th 2012, Microsoft have also announced, via their blog, a huge drop from normal pricing. If your PC is currently running Windows XP, Vista or 7, you'll be able to download an upgrade to Windows 8 Professional for just $39.99 (or get it for $69.99 on disk), as long as you do so before January 31st 2013. This isn't a restricted regional offer, either, since download ability has been expanded to over 100 countries and in 37 languages. Moreover, late Windows 7 adopters won't miss out, since anyone buying a PC with a pre-installed copy of Windows 7 Home Basic, Home Premium, Professional or Ultimate on or after June 2nd 2012 can register for their special offer before February 28th 2013 at www.windowsupgradeoffer.com. The price for those taking advantage of this offer will be just $14.99!

If Microsoft want to get all of us running the same generation of their operating system, this is probably the most effective way to achieve it, as I suspect few private individuals will be able to resist this bargain. Businesses, on the other hand, may hold fire for reasons of software compatibility and a lack of touchscreens to take advantage of the new Windows 8 Metro graphics overlay.

All of which brings me neatly to the arguments currently raging on the SOS PC Music forum about the desirability of Windows 8 for the PC musician, which also seem to revolve largely around the Metro interface. Some musicians love it for the multi-touch control possibilities (even on a second smaller screen while the main one continues to provide the traditional sequencer/arrange display); others hate the feel of Metro and can't wait to disable it to get back to the 'normal' interface beneath.

Some musicians have also experienced high levels of DPC Latency on the Windows 8 preview, which may be related to rogue drivers rather than Windows 8 itself — although it's rather frightening to read that the Microsoft engineering team consider 100ms as an acceptable goal for audio latency, when many musicians are yearning for sub-6ms figures! (For more on this topic, go to http://blogs.msdn.com/b/b8/archive/2012/06/08/building-a-rich-and-extensible-media-platform.aspx.) Perhaps, even though it costs only $14.99, we'd better be a little cautious about taking up Microsoft's Windows 8 upgrade offer and stick with the now proven Windows 7 for now... 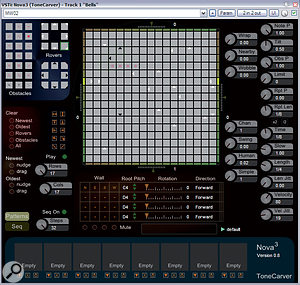 ToneCarver's freeware Nova3 is, at its heart, a generative MIDI sequencer inspired by the famous Otomata on-line music instrument, in turn inspired by Conway's Game Of Life.

Meanwhile, let's look at a rather different aspect of PC life. Conway's Game Of Life (a 'cellular automaton' world where cells live or die depending on how many of their fellows are adjacent to them in a grid) can also produce some very worthwhile musical results. There are also some intriguing online music generators working along similar lines, one of the most satisfying, to my ears, being Otomata (www.earslap.com/projectslab/otomata), created by Turkish sound artist Batuhan Bozkurt. Each of its 'alive' cells has four possible states (up, down, right, or left), and at each step of your sequence, the cells move themselves in the direction of their internal states. If any cell encounters a wall, it triggers a pitched sound whose frequency is determined by the X-Y position of collision, and the cell reverses its direction. If a cell encounters another cell on its way, it turns itself clockwise.

Now (and here's the main reason I'm talking about this!), ToneCarver has created a PC-only VST 2.4 plug-in inspired by Otomata that he's named Nova3 (http://tonecarver.wordpress.com/nova3-generative-sequencer-vst), which simply outputs sequences of MIDI notes. It's available as a free download in both 32-bit and 64-bit versions, and you just insert it into your favourite sequencer, ahead of your chosen synth, to produce a stream of intriguingly-changing audio. With a host of enhancements, including variable grid size, multiple different obstacles for cells to bounce off, functions that encourage the notes to conform to various scales, and variable probabilities for most parameters, to add more 'humanity', Nova3 lets you disappear for hours into a musical world of your own creation — try it for yourself and see!

Psst... cheap Intel SSDs: Continuing on the subject of unexpected price reductions, Intel have announced that their various ranges of solid-state drives will have their prices cut in August (hopefully by the time you read this). Models with capacities ranging from 60 to 600 GB are reduced by anything between 10 and 25 percent, which should encourage plenty more PC users to install not only a small SSD to boost Windows booting times, but also some larger ones for main data storage. If this trend continues, old-fashioned hard drives are likely to become largely extinct in the not-too-distant future!

Intel hex-core news: Anyone waiting for a hex-core Ivy Bridge CPU to compete with Intel's i7 3930K/3960X Sandy Bridge CPUs (3.2GHz and 3.3GHz respectively) may be waiting longer than they expect, as none are due until sometime in 2013. In the meantime, anyone desperate for more hex-core processing clout will have to make do with Intel's new Core i7 3970X model in late 2012. This Sandy Bridge 'enthusiast' CPU has a nominal clock speed of 3.5GHz and a turbo speed of 4GHz.