Unlock the potential of overlooked but useful Live effects devices. 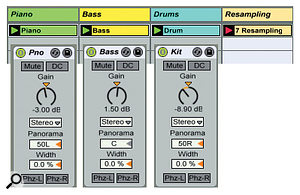 1: Piano, bass and drum loops are resampled to capture a loop with those parts converted to mono, and panned, respectively, hard left, centre and hard right. Utility is used to convert the parts to mono (Width 0.0 percent), pan them and adjust their gains to make each peak at -9dB, so that each channel of the resampled stereo file peaks at -3dB.

If you held a competition to find Live's most exciting audio effect, Utility would undoubtedly come in last, and Auto Pan would not be far ahead. However, these devices offer easy solutions to a lot of common problems relating to level, stereo image and panning, and they have surprisingly creative applications as well. In this month's column, we're going to look at several ways to get the most out of them.

For the best results when reproducing the following examples, start with a simple audio loop with three mono parts: keys or guitar panned hard left, bass panned centre, and drums panned hard right. Screen 1 shows how to derive this from separate MIDI instrument or audio tracks with the help of Utility. The examples will also be clearer if monitored via headphones, to avoid the vagaries of speaker placement and room reflections.

Once you've created the resampled file, pan its track hard right and then hard left, and notice that the left channel contains only piano and bass whereas the right channel contains only drums and bass. In a stereo signal, the 'phantom' centre comprises everything common to both the right and left channels, in this case the bass. Now insert an instance of Utility on the resampled track and set Width to 0.0 percent. The image will become mono, and you can pan it from side to side. Next set Width to 200 percent and notice that the bass disappears and the piano and drums have an odd presence, sometimes called the 'out of speakers' effect. This is because the channels are phase-inverted copies of each other. Click the Phz-R button at the bottom right of the Utility panel and that effect goes away. You can use similar Utility settings for Mid/Side conversion — see the 'What Side Are You On?' box.

2: Pictured here are three different LFO wave shapes used to chop a two-bar stereo chords clip. Pan & Gate (left) uses a reshaped sine wave to gate out the last half-note of the two-bar pattern, which is panned left, centre and right respectively for the first three half-note segments. You can precede Auto Pan with a narrow-width Utility to reduce or eliminate that panning. Pulses (centre) uses a reshaped sawtooth pattern to chop the chords. Change the Offset setting (try multiples of 45 degrees) to control where the pulses fall. Risers (right) produces a fade-in at each half-note. Notice that the Invert button flips the sawtooth shape from falling to rising.

Here are five common problems you can solve with a single Utility device.

Let's turn our attention to Auto Pan, which you can think of as a two-channel gain LFO. Insert the device on a track with the trio test clip described in screenshot 1 and change the Amount setting from the default 0 percent to 100 percent. You'll hear the keys and drums alternately fade in and out while the bass pans back and forth. If you use a Utility before Auto Pan to narrow the width, you'll hear the whole image panning. If you change Auto Pan's Phase setting from 180 degrees to 0 degrees, you'll get a mono tremolo effect. 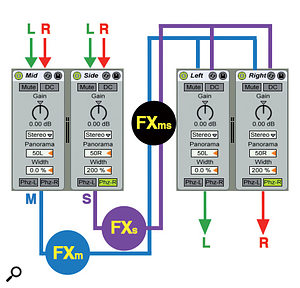 4: In this flow chart, a stereo signal is passed through parallel Utility devices set to produce hard-panned mono Mid and Side signals. You can process Mid and Side signals with separate mono effects as well as processing the pair with a stereo effect. Processing the pair is different from applying the same effect to the original stereo signal. The second pair of Utility devices converts the Mid/Side signal back to stereo (see box, left). Auto Pan's LFO speed can be free‑running (set in Hz) or tempo-sync'ed (set in note divisions). In Notes mode, you get an Offset knob below the Phase knob that shifts the start of both LFO patterns relative to the selected note division. In Hz mode, you get buttons below the Phase knob to change it to a Spin knob. In Spin mode, the knob increases the rate of the right-channel (green) LFO by as much as 50 percent. You can simulate Spin in Notes mode by using two Auto Pan devices in parallel (one for each channel) and adjusting the rate of one relative to that of the other.

The LFOs offer four waveforms (bottom right buttons), but with the help of the Normal/Invert button (bottom left) and the Shape knob you can achieve virtually any shape you need for gating, panning, chopping and simulated delay effects (see screenshot 2). When using Auto Pan to create rhythmic patterns, try applying automation or mod wheel modulation to the Amount knob, to contour the effect to your music.

The processes explained here are only the beginning. You can use Utility devices in an Audio Effect Rack along with Auto Pan and other effects to produce highly complex multi-effects, such as the one shown in screenshot 3.

What Side Are You On?

Utility makes short work of Mid/Side conversion, which you can use for mundane as well as highly creative effects processing. The Mid signal in Mid/Side conversion is the mono sum of the left and right channels, which is then panned hard left. The Side signal is the mono sum of the left channel and the phase-inverted right channel, which is then panned hard right. Live compensates for channel summing by subtracting 6dB and employs a -3dB pan law, adding 3dB when panning hard left or right. So as long as both incoming channels peak below -3dB, you can use the same Utility settings to convert Mid/Side signals back to stereo (see screenshot 4). You can use separate tracks and track groups for the conversions and effects, or you can set the whole thing up in an Audio Effect Rack, placing any effects between the two conversions.

You don't need this setup for two of the most common Mid/Side processes: controlling stereo width and separate EQ of the Mid and Side signals. The Utility's Width control accomplishes the former and Live's EQ Eight in M/S mode accomplishes the latter. You do need this setup for separate compression of the Mid or Side signals, which is another common process. Many Live and third-party plug-ins provide interesting and useful results when used independently on the Mid and Side signals. Good examples include delay, reverb, pan modulation and moving-filter effects.