Get more done in less time, with these workflow tips for Cubase 7.

One of the main frustrations with DAW software is how long everything seems to take — often just long enough for you to lose the creative inspiration you were seeking to nurture! Wouldn't it be nice, then, if your Cubase projects benefitted from a little more flow and a lot less work? Follow this tutorial and hopefully you'll achieve that, because this month I'll offer several tips that should result in a more efficient use of your favourite DAW software.

The Curse Of The GUI

Our interaction with almost all modern computer software is through a graphical user interface (GUI). While the GUI makes it easier to access the multitude of features in today's 'bloatware', it doesn't necessarily make it faster. Certainly, when you use a feature frequently — perhaps dozens of times during a working day — being tied to a mouse and a menu is not the best way forward; you really do need to use key commands. If the keyboard shortcut takes a tenth of the time it 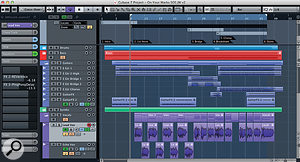 We all spend a lot of time in the project window so it's worth learning the most efficient way to work within it (and that doesn't include those pesky zoom sliders at the bottom-right). takes to execute the same command with a mouse, and this saving is totted up over the 20 or so commands you execute perhaps hundreds of times every working day... well, you do the maths. You'l certainly save a hell of a lot of time and frustration.

Every Cubase user spends a lot of time in the Project window, so for our 'workflow efficiency 101' that's a good place to start. Our main mouse-free, workflow enhancements may seem unglamorous and perhaps a little obvious, but get to grips with them fully and they'll speed up your work more than anything else: let's hear it for Markers, Zooming options and Key Commands...

In all but the simplest of projects, if you know you're going to spend some time working on it, it's well worth creating a Marker track. Cubase provides two kinds of markers — position and cycle — and both have their uses. Position markers simply identify a single point on the timeline. You might use these to identify important locations when, for example, composing to picture, where position markers can identify 'hit' points where the music has to synchronise with the on-screen action. For song-based work, where you have the usual array of defined song sections, cycle markers are often more useful. As the name suggests, these are paired markers that can be used to identify the start and end points of a particular song section.

You can add both types of markers via the Marker track or the dedicated Marker window. Position markers will be added at the project cursor position while cycle markers will be added at the current left/right locator positions. Initial positioning of markers is a one-off task so we can forgive ourselves some mouse work there. However, once positioned, key commands exist to either move the cursor to a marker (position or cycle) and to recall a cycle marker. The beauty of the latter function is that it 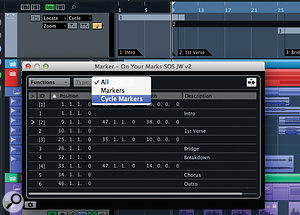 A project can contain both position and cycle markers but, for clarity, you can choose to filter their display within the Marker window if required.instantly moves the left and right locators to cycle marker positions ready for cycle playback. For moving quickly back and forth to work on different song sections, this is a huge time saver. The 'Recall Cycle Marker' key commands are not defined by default so a visit to the Key Commands window is required to configure these.

The only other issue to consider with cycle markers is whether you position them exactly on the song section boundaries, or whether you set them a bar or two pre and post those boundaries. The latter approach obviously means you get a couple of bars of pre-roll and post-roll around the song section which can be useful when doing multiple takes via cycle-based recording.

Aside from moving between different song sections, the other oft-repeated navigation task is zooming in or out — both vertically and horizontally — on the Project window contents. This can be done in various ways but (unless you're a glutton for self-abuse!) avoid using the horizontal and vertical zone sliders that lurk bottom-right of the Project window; they're too small and fiddly to give you sufficiently precise control (in fairness to Steinberg, similar controls in other DAWs are equally irritating).

Instead, learn just a few of the zoom-related key commands. The most obvious of these are pre-defined by default; horizontal zoom in and out uses the H and G keys respectively, Alt/Option+H or G zooms in and out in a vertical sense, while Shift+F automatically zooms horizontally to show the full length of the project.

However, there are a few other very useful ones that are not pre-defined and you ought to define for yourself. For example, Zoom To Selection Horizontally (rather than just the Zoom To Selection key command) and Zoom To Locators are both very useful. The latter is great when used in combination with the Recall Cycle Marker; two quick key combinations and you have both your song section selected and are zoomed in horizontally to view it. If you then add the To Left Locator key command (by default, 1 on the number pad), then your cursor is all ready to start playback (via the Spacebar 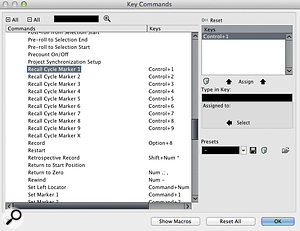 Being able to recall preset cycle markers using key commands means you can get working on the required song section in an instant. key command, of course) of that song section.

In addition, if you need to flip back and forth between two zoom settings, it is worth defining key commands for the Redo Zoom and Undo Zoom options.

Even just adding these cycle-section selection and zoom key commands to your keyboard repertoire will bring significant workflow improvements, but these commands hold the key to plenty of other possibilities for further time saving. Obvious examples are the key commands for moving between tracks and selecting events on tracks. For example, in the absence of having any events selected within the Project window, the up/down cursor keys will move you through the track list, selecting each track in turn. If you hold the Shift key at the same time, you can select multiple tracks in the same fashion, adding tracks either beneath the current selection or above it.

If you then try the left/right cursor keys, these allow you to select an individual event on the currently selected track (or on the topmost track if you have several tracks selected). Again, adding in the Shift key allows you to select multiple events along an individual track while holding Shift and pressing the up/down cursor keys expands the selection of events onto tracks above/below the current one.

Used in this way, it is very easy to select a horizontal/vertical range in your project manually (perhaps a range that doesn't coincide with one of your song sections already defined by cycle markers). And once you've done that, the default Alt/Option+S key command executes the Zoom To Selection command to perfectly zoom horizontally and vertically into your selection.

Finally, if you use Folder Tracks to organise projects containing lots of tracks, there are various key commands available for folding/unfolding these, although you do have to define them for yourself within the Key Commands window.

Pretty Fly For A GUI Guy

There is nothing dramatic about any of the examples provided above except, of course, the fact that when repeated over and over again in the course of a working day, they will save you a significant chunk of time. However, nothing comes for free and, if you want to benefit from these efficiencies, you have to train yourself to use them — which often means working hard to break your existing habit of reaching for the mouse.

Creating a printout of these Project window navigation shortcuts (most easily done by making some screen grabs of the Navigate, Transport and Zoom sections of the 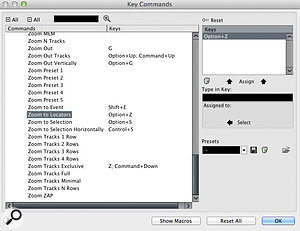 The Zoom section of the Key Commands window has lots of options for improving your Project window navigation. Key Commands list) will help enormously. For a short while, this might feel like one step back rather than two steps forward but, if you persevere, I promise the rewards will come. It will be one less thing to get between you and the realisation of your musical/production ideas, so it should lead to quicker and more satisfying results. And if not, well, at least you'll have saved enough time destroy a few more brain cells by getting to the pub significantly earlier!

While the Cubase Transport panel contains lots of useful information and can be easily customised, there are times when it just gets in the way, especially if you work on a laptop with a modest amount of screen space. All the common Transport panel functions can be executed via key commands — toggling playback on/off, activating record, toggling cycle mode on/off, fast forwarding or reversing and returning to the zero time point, amongst other things — just consult the Transport section of the Key Commands window. You can then toggle off the Transport panel and save some screen space. Oh, and the key command for that is the F2 key!