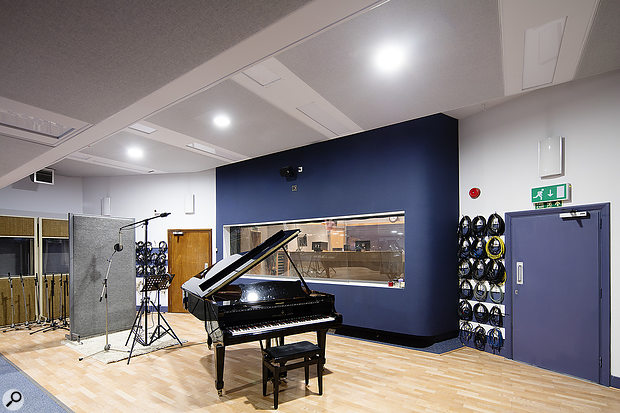 Sir George Martin is still best known as the man who signed the Beatles and produced all of their records, but his six-decade career included many other highlights. In the late ’60s he founded Associated Independent Recording, which opened its first studio in 1970. Legendary AIR studios include the now-closed facilities in Oxford Street and on the island of Montserrat in the Caribbean, as well as the still-thriving AIR Lyndhurst Hall in north London. But around the same time, George Martin also founded a company managing and supervising composers for commercials, film scores, radio jingles, television, games and theatre. AIR-Edel was a joint venture with Herman Edel, who had been successfully running a similar company in the US. For many years, AIR-Edel relied on other studios, but in 1990, acquired Audio International Recording Studios, both for use on their own projects and to hire out to third-party clients.

Located in Besant Hall, a former meeting hall for the Theosophical Society, the building boasts an interesting history. Built in the early ’30s, it already housed a recording studio as early as 1937. Conceived as a small theatre to record live shows for Radio Luxembourg directly to wax discs, Star Sound was one of the first independent recording studios in the UK. Legend has it that Star Sound also recorded the first full-length radio programme to magnetic tape in Great Britain in 1949. 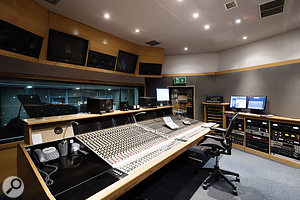 Studio 1’s control room is based around an impressive Cadac mixer. 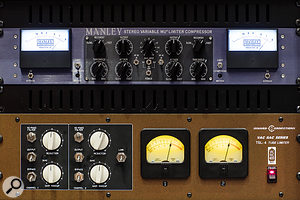 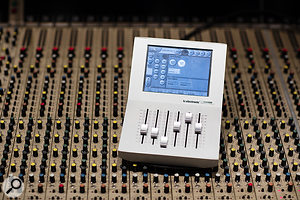 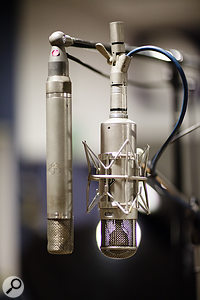 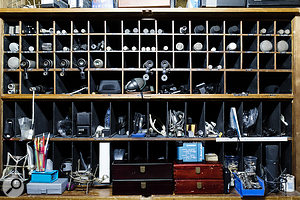 AIR-Edel’s mic locker is well equipped for a huge variety of recording tasks. 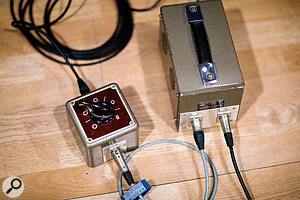 Remote pattern changing for the studio’s C12.In the late ’60s, the studio was remodelled and renamed Audio International, now a joint venture between Radio Luxembourg and Chrysalis Records. The control room of the main studio was installed at the former stage of the auditorium, and another room dedicated to speech recordings — a purpose it still serves today — was built in the former balcony of the theatre. This interesting and rather unusual structure, with slanted ceilings, is still apparent in various parts of the building today. For the next two decades, Audio International made its mark predominantly as a rock & roll recording studio, churning out a string of world hits by artists such as Gilbert O’Sullivan, the Sweet, Tom Jones, Mud, Suzi Quatro and Sheena Easton.

When AIR-Edel acquired the premises in 1990, the focus shifted again, and the studio began to record and mix music synchronised to picture for commercials, television programmes and films. Important projects of this new era include Thor, My Week With Marilyn, Agora and Pride And Prejudice. In 2007 AIR-Edel was taken over by music publishing rights specialist Cutting Edge Group, but has recently returned to its independent roots following a management buyout in January 2015.

Today, AIR-Edel Studios encompass the main room and two smaller recording facilities. Studio 1 boasts a 70-square-metre live area large enough to accommodate ensembles of more than 20 players. The room offers a high ceiling, live and dead spaces and floor-to-ceiling baffles, making it adaptable for a variety of purposes, from band recordings to string sections or larger radio play ensembles, and it can even accommodate chamber orchestras. Music synchronised to picture still forms an important share of AIR-Edel’s recording and mixing projects, and the venue offers all the facilities needed for this job, including a 5.1 monitor system based on Dynaudio M2, MB15 and BX30 units.

A few outboard preamplifiers such as a Chandler Germanium and an AMS-Neve 1073DPD are available as alternatives to the Cadac’s onboard preamps, but the majority of the outboard collection is made up of high-quality dynamics processors. Studio 1 offers two Manley Vari-Mu compressors, which can be linked for multi-channel duties, a pair of Neve 2254/A limiters, two UREI 1176LNs, an Inward Connections Vac Rac TSL-4 opto/tube compressor, a Prism Sound Maselec MLA2 stereo limiter and a Summit Audio TLA-100, amongst other units. The effects setup includes three original EMT 140 reverb plates, a TC 6000 MkII unit loaded with reverb and mastering processors, a Lexicon 300 and an AMS DMX 15-80 delay, as well as a Roland Space Echo.

With a mic locker that includes a vintage AKG C12, a number of Neumann U47s and a Neumann SM69 stereo mic, among many others, AIR-Edel is equipped for any recording task. The instrument collection includes a Steinway B grand piano, reportedly a favourite of many players in London.

AIR-Edel’s much more compact Studio 2 is centred around a Toft ATB16 console, and is mostly suited for overdubs and speech recordings. The 12-square-metre live room and the control room of similar proportions form an intimate production environment filled with ample daylight. Studio 3, however, another production suite, is currently on long-term hire and not available for daily studio business.

Recently, Rosie Danvers and Wired Strings have recorded a lot of overdubs for rock and pop records at AIR-Edel, with Tommy D producing, and Patrick Doyle recorded his recent album featuring piano arrangements of his most well-known film score themes. Spitfire Audio use AIR-Edel on a regular basis for their sample libraries — in-house engineer Nick Taylor mixed their drum instrument The Grange in Studio 1 — and Jarvis & Ayres record a lot of great radio plays for BBC Radio 4, including the James Bond adaptations.