Notes From The Deadline: February 2016 Column Skip to main content

Notes From The Deadline: February 2016 Column 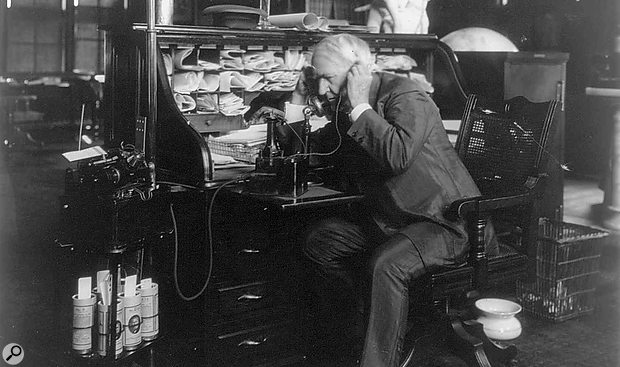 The faster the pace of progress, the harder it is to keep up.

George Washington Johnson was the first African-American recorded music star. Born the son of a Virginia slave in 1846, as a young man he moved to New York where he was spotted by two different phonographic companies whilst working as a street entertainer. They each invited him to record his comedic voice and whistling skills onto the recently invented paraffin wax phonograph cylinder for a fee of 20 cents per two-minute performance. In all likelihood, he was the first black man to ever have his voice recorded. And, in keeping with the times, you probably won’t be surprised to learn that the first song he released was a stunningly racist ‘comedy’ Vaudeville song entitled ‘The Whistling Coon’, which featured delightful lyrics such as ‘With a cranium like a big baboon... he’s happy when he whistles in tune.’

The interesting thing about this early recording medium is that each wax cylinder had to be recorded live as an original master. A singer with a strong voice could usually make imprints on about three or four playable cylinders with each performance by singing (or, more accurately, shouting with their head sticking into the wide end of a large brass conical trumpet) into several of the machines simultaneously. And a good day in the studio might see George perform the same song over and over again as many as 50 times. Between 1890 and 1895 it is estimated that George recorded up to 50,000 performances of his most enduring piece ‘The Laughing Song’. I urge you to check it out on YouTube because, despite being 120 years old, not only is it a fascinating peek into the world of the early days of the phonographic industry, but thanks to a little bit of noise-reduction processing, you can hear pretty much every word and even most of the piano accompaniment in the background.

In contrast, I recently tried to load up a Logic song file for a piece of TV music I did in 2002, and it wouldn’t work. At all. Not even slightly. The latest version of Logic X on the latest Mac with the latest OS just gave me a big fat ‘nope’. I tried it on Logic 9, and it helpfully suggested I need to try it on Logic 7. Heaven only knows where all the discs for Logic 7 are, and I’m not even sure Logic 7 will work on this current computer.

In a way I’m glad. Can you imagine the state of the song file if I managed to get it open? Can you imagine its desperate little face wandering aimlessly though my computer’s root directory hoping to come across the plug-ins and sound libraries it needs, knowing full well they ceased to function about the same time that Ronald Reagan did?

I flatly refuse to be one of the anti-upgrade Luddites. I love all leaps forward in software and hardware, but if a fragile little paraffin wax cylinder master recording can survive for more than a century of usefulness, why do we accept literal obsolescence of our work after just 13 years?

Self-drive hydrogen cars are just around the corner, we email spare parts up into space so they can be 3D-printed onboard space craft hundreds of miles above the earth, and yet apparently we need to accept the fact that every decade or so we should expect to rebuild all of our work from scratch if we want to hear it again.

It turns out the biggest enemy to archiving is no longer physical degradation of the storage format. It’s not about tapes going mouldy, or hard drives corrupting. Instead, the greatest destructive force is simply the speed at which we are all blissfully tumbling into the future.