With a singer like this, whose low mid-range warmth and upper-spectrum breathiness are essential elements of their character, it makes sense to construct your production around it. Notice here how the piano’s thinned low mids at 0:45 and 1:35 help minimise the risk of muddying the overall mix tonality’s poptastic airiness, as does the staccato envelope of the rhythm synth (first heard at 0:15) that offers the only real low mid-range competition. The bass is also carefully sculpted to provide beef below 200Hz, as well as enough true mid-range to ensure small-speaker compatibility, 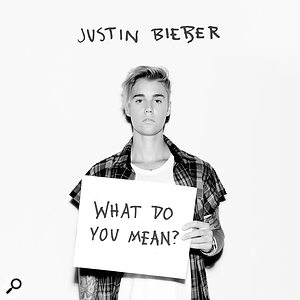 but with a suckout in the 200-600 Hz low mid-range danger zone. At the other end of the spectrum, Bieber all but has the mix to himself. The clock ticks and backbeat are both so transient that they don’t hamper his intelligibility or sheen appreciably, and neither does the beautifully understated shaker (first arriving with the hook at 0:31), on account of its super-smooth tone and comparatively low fader level — enough to significantly enhance the groove, but not an ounce more. All of which leaves a little 1kHz pocket that the rhythm synth and twiddly lead-synth hook can both neatly use to anchor themselves solidly in the balance. Mike Senior 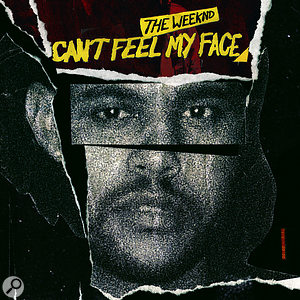 Besides the great bass/drums groove and top-notch vocal performance, this production is full of lovely little arrangement touches. Check out the subtle vinyl crackle bubbling up under the beat (most noticeable when it first arrives at 0:44), which really gives the track a cool atmosphere. The little Michael Jackson-style background vocalisations (starting with the inspired ‘uh... ah!’ during the vocal drop at 1:03) also add significantly to the groove on an almost subliminal level. And I love the way the chorus’s rhythm track subtly builds through the song, first with the beautifully restrained shaker layer from 1:38, and then by the addition of the second verse’s rhythm guitar for the final workout.

The chorus backing vocals pull a couple of neat stunts too. Firstly, they convert the lead line’s straight rhythm into syncopation by anticipating the main beats — a great way of squeezing extra musical value from a single rhythm-plus-lyric idea. But the way they’re cut dead mid-phrase at 3:18 also provides a fantastic little “what the...?” moment, which really drags attention back to the beat for the outro. Maybe it just started out as a slip of the Mute button (it wouldn’t be the first time Serendipity had earned itself a co-production credit), but seasoned producers rarely let good fortune go to waste. Mike Senior

‘Writing’s On The Wall’ 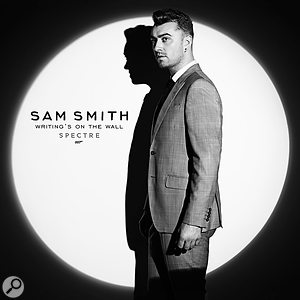 I’ll admit that this latest Bond theme doesn’t quite float my boat, because even the opulent arrangement and undeniably gorgeous cinematic sonics don’t quite seem to compensate for the rather weak parallel-octaves motion between the bass and lead vocal at the onset of each chorus. This is a clear no-no in traditional harmony primers, and while every well-known composer flouts such textbook prohibitions from time to time, they’re nevertheless there for a reason: parallel octaves provide none of the chord-to-chord tension and release that typifies classical-style harmonic momentum. Were this pure pop, it wouldn’t matter much, but within the Bond franchise’s old-school orchestral idiom I think it falls a bit flat.

That aside, the scoring is admirable. Just to cherry-pick, check out the high strings at the start of verse two (2:02-2:17), which exude an effortless class I only hear in project-studio productions about twice a decade, sad to say. The lead line is supported beautifully: the violins back off so the start of each vocal line can pop through; there’s a swell as the vocal intensity rises through each phrase, and then you get thematically linked and/or just stylish fills to hold the listener’s attention whenever Sam takes a breath. But the arranger is also capitalising on the unique expressive capabilities of these instruments. Not only does slurred bowing give the fills their soaring legato, but the fourth-beat bow-change at 2:09 stresses both the Bb note’s aching dissonance and the characteristically lugubrious finger-slide up to the downbeat C. One word of warning, though: if you try to emulate the fast runs of the second fill (2:15) with any amateur ensemble, they’ll almost certain sound scrappy — it’s fiendishly difficult to play (and indeed capture) those kinds of high flurries appealingly, because the metal-only construction of the violin’s top E string (the other strings have a non-metallic core) gives it a much more piercing timbre, especially on cheaper instruments.

Although woodwinds are conspicuously absent, there are plenty of ‘arranger’s friend’ sweeteners, such as harps, timpani, cymbal mallet-rolls, and the sneaky bass synth lurking in the 40-80 Hz depths. While plenty of classical instruments can put out those kinds of low frequencies, they’ll rarely give the kind of LF power you regularly hear in the charts. Furthermore, low frequencies take time to build up in acoustic instruments (and, indeed, their environment) so an orchestra’s low end will naturally lag a little behind the beat. The bass synth (or the electric bass in Adele’s ‘Skyfall’, which I critiqued back in SOS June 2013) simply helps clarify the harmonic rhythm for mainstream listeners.

Also like ‘Skyfall’, the CD single features an instrumental that neatly phase-cancels against the full mix to isolate the vocalist. Fairly heavy piano spill remains on the vocal mic, though, suggesting that a significant portion of the line was captured with the pianist playing in the same room — a technique Steve Fitzmaurice mentioned when we interviewed him in SOS September 2014 about working on Smith’s debut album. Why mess with a winning formula? Mike Senior

‘Talking To My Diary’ 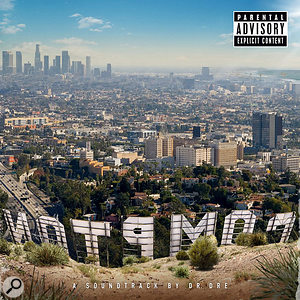 Dr. Dre’s second solo album, 2001, has been amongst my most valued mix references for more than 15 years, and still knocks spots off most commercial productions in sonic terms. The bass and kick are admirably tight and powerful; the backbeats are so upfront they make you blink; and the vocals are beautifully clear and judiciously balanced to maintain the power of the beats. The translation is ridiculously good to all sorts of different playback systems, and the depth dimension stretches from the end of your nose to the far horizon. In short, it’s a thing of wonder. Needless to say, it’s absolute purgatory measuring any mix of your own against such a benchmark, but it doesn’t half push you to improve your engineering chops, which is the whole point.

So it was perhaps inevitable that 2001’s follow-up, Compton, would fail to live up to my hopes. Don’t get me wrong, on a musical level it’s killer, full of great beats (the kick and bass are still to die for), engaging textures, and mad production ideas. But sonically things feel over-hyped for the most part. For instance, take the single ‘Talking To My Diary’ (amongst the new release’s sonic high points, to my ears), and put it up against previous-disc cuts like ‘The Watcher’, ‘Bitch Niggaz’ or ‘Housewife’. First of all the beat feels over-squashed/clipped for the sake of loudness, with exactly the loss of punch and power you’d expect. Then there’s a general trebly abrasiveness to the upper percussion and vocal timbres that makes party-grade listening levels pretty cruel on the cochlea, as well as robbing the rap performances of gravitas. (Other tracks, such as ‘Deep Water’, fare even less well in this regard.) Plus, overall I’m missing the same sense of clarity and depth, as if too many aspects of the mix are competing to be up-front at once and crowding out the longer-distance views. But isn’t Compton just reflecting contemporary tastes in that respect? I don’t honestly think so, judging by recent hip-hop productions I checked from Drake, Wiz Khalifa, Kendrik Lamar and various others — 2001 still seemed to make a better impression by comparison. 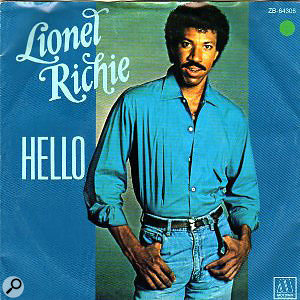 Adele’s latest single (reviewed last month) shares a title but precious little else with this ’80s smooch-a-thon, which helped propel Lionel Richie and his perma-rolled sleeves into the pop stratosphere. Returning to the song after all these years (and trying to put that hair/moustache combo out of my mind), I was actually surprised by how well the production had aged. Yes, most of us nowadays would shelve a bit of HF off the reverb returns and fade those synth string pads down 6dB, but all the main backing instruments still sound great, with none of that plastic trebliness that so many ’80s artists tried to pass off as ‘modern hi-fi’. The acoustic guitar that arrives at 0:39 is gorgeous, for instance: very delicately played so that you can really hear the string sustain in the mix, but with great care clearly taken to avoid mechanical noises becoming a distraction — no mean recording feat. The bass and clean electric guitar are likewise paragons of virtue in sonic terms, boasting richness, clarity, and (crucially) not a trace of ham-fisted chorusing. Likewise, although the drums are doing their best to sound like samples with their super-discrete panning, at least they’re not submerged in nasty synthetic reverb. If anything, they’re surprisingly up-front, giving as much of a nod to the ’70s as to the decade in which they were recorded.

But the forgotten highlights of this production for me are all those great synth details. The recirculating twinkles that start the song and then adorn the closing word of every chorus. The gossamer arpeggiations that flutter over “kissed your lips a thousand times” in the first verse, and reappear for “heart will overflow” in the second. And the intriguingly sporadic flutey D-E-A fragment in the run-up to the solo.

Harmonically, this song’s calling card is, of course, the chorus’s complete falling-fifth cycle of root notes within the home key of A minor. Heaps of composers have used this device, but what tends to differentiate their approaches is how far they stray from the key scale during the cycle. In this case, Richie first chooses to spring a surprise C# on us as the cycle starts, by following “Is it me you’re looking for?” with an A major chord, then resolving to D minor and continuing the pattern through G, C, and F major chords. But the real signature moment is where he flattens the supertonic root chromatically to produce a momentary Bb major sonority, only to snuff that out a moment later with the jarring first-inversion E major dominant chord (giving rise to a splendid diminished-third bass progression from Bb to G#) that pulls us back to A minor. Mike Senior