An Employer's Perspective By Mark Thompson

Formal education has many benefits, but to become a successful engineer, you need more than a degree alone.

Every now and then, I'm invited to talk to students of music and related technologies on a topic of my choosing. These days, I tend to address the thorny subject of what comes after the years of academic toil. I have learnt to tread carefully, tiptoeing over eggshells as nimbly as I can, because the reality of the big bad audio world is somewhat different from the preconceptions, or possibly misconceptions, of the classroom. 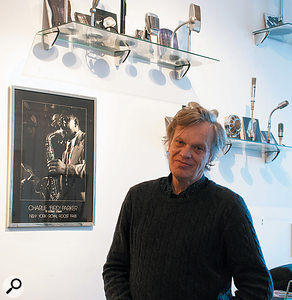 I've worked on both sides of the metaphorical control-room glass. After leaving college with a history degree, I plied my trade as a session musician before accidentally slipping into tour production, working on the road with many of the Two-Tone acts of the late 1970s. Another twist of fate saw me stumble into artist management. I then ran a small record label before slithering down the M1 to London, where I worked closely with major labels such as A+M, CBS and EMI. Much of the 1980s were spent managing successful record producers and running their recording studios, until another fork in the music business road saw me bump and grind into the esoteric world of recording studio design and equipment supply. Despite continuing a creative involvement with artists and producers, and running my own successful recording facility, SNAP! Studios in North London, advising customers and supplying their equipment needs remains my main occupation, not to say preoccupation. I'm still learning. I hope I always will. Therein lies the challenge that hauls my weary head up from the pillow every morning.

This brief biography is neither meant to impress nor flatter, but rather to give an insight into how my generation of recordists earned our spurs. Because my journey was typical of the convoluted career path so many of today's established professionals followed. You see, to my contemporaries, an involvement with pop and rock music was thought of as a vocation rather than a career. Indeed, the concept of pop music as a business is relatively recent. Despite the Beatles, prog-rock, punk and New Romantics, the music industry was traditionally something that enthusiasts fell into. If your passion was recording, the starting point was either to build and run your own facility or hustle a gig as a tape-op in a studio, a glorified go-fer, washing up, making tea, cleaning toilets — all the glamorous stuff that makes the wheels go round. Then, if you showed sufficient willingness (and paid enough attention), a year or two down the line you would be allowed to mark up patchbays and reset the mixing console after a session. One year on, the most promising apprentices would get to sit beside the engineer, prodding the occasional fader and tweaking the odd EQ. In another year or so, our happy wannabe producer would be granted overnight downtime to engineer an in-house project and, depending on results, be given a chance to assist on a proper session. As in any walk of life, it was then down to what the aspiring engineer made of the opportunity.

Other areas of the industry followed similar trajectories. Live sound engineers tended to start as humpers, then would graduate to on-stage monitors before being given the opportunity to mix front of house. The typical television or post-production engineer probably started as a runner before worming his or her way into the control room as a general assistant on the way to better things.

Walk Before You Run

None of this is to belittle qualifications. Well, not as such. I am, however, concerned that so many colleges imply that an expensive degree offers a short-cut to jobs in the industry. Sadly, the reality is sometimes the opposite.

I employ more than 20 people in various businesses around Europe. Some are recording engineers and tape-ops. Some are technical service staff. Some work in sales and the rest administration. I have a pretty broad idea of what I'm looking for when a vacancy arises. Needless to say, I get peppered with job applications and CVs, and make it a rule to answer each one individually, always being as constructive as possible. What I always look for is experience rather than qualifications. Why? Lots of reasons, really. To start with, I find that all too often the theory drummed into students just doesn't cut it outside the classroom. What matters in the real world is an ability to solve problems, to work as a team member and, maybe more than anything, to look, listen and learn. All too often, recent graduates assume theyhave all the answers, maybe justifiably so. But real life isn't like that. On the contrary, it's more important to know which questions to ask and how or where to find solutions. And I'm sceptical about what's taught. Sure, there are important principles that guide all professions, but this is only a small part of the story. No amount of study can prepare an employee for how to function under pressure, how to organise his or her time, how to manage a session, or how to improvise solutions for the inevitable problems that arise. And the trouble with so many graduates is that, having mortgaged their futures (or their parents' past) for the promise of a valuable qualification, quite understandably they believe that they're qualified to sit in the producer's chair, or at the very least to engineer a session. In reality, they are in exactly the same position as any other bright school-leaver, having to pay their dues with all the boring, menial tasks that every job involves.

The one overriding qualification I look for in a new employee is attitude. Just as I will never ask my staff to do anything that I'm not personally prepared to do, so I expect those who join my payroll to work on their own initiative, spot problems others don't see, wade in and go the extra mile when pressures mount. In the studio, for example, I notice little things, such as the willing tape-op who makes a cup of tea or coffee for clients without having to be asked, or changes light bulbs and washes up without prompting, the technician who cleans the fascia of a processor thoroughly after fixing a pig of a problem, or the salesman who visits a client out of hours to show them how to hook up the oojimiflip to the digiblah. I never expect a new arrival to hit the ground running, no matter what their qualifications might imply.

No matter how well qualified they are, graduates start the real process of learning when they enter the workplace, just as it ever was, just as it ever will be. I'm not suggesting that they forget about their expensive degree. Of course not. Much of what they learn may be of value in the future. But please, please, please, don't waltz into a new gig intending to impress a bunch of hackneyed time-servers with a fount of universal knowledge. It will be your attitude and willingness to graft that make you a valued member of the team, and for each ton of rock you manhandle from the coal face, you will be one yard closer to your dream of becoming whatever it is you want.

So hang on in there. Keep those dreams alive. A career in audio can be the most rewarding job on earth. But remember, a degree in a related subject is no substitute for hours on the job. And that requires squeezing both feet through the right door. So be hungry, be modest and be hard-working, and one day you'll get the opportunity to prove what you can do. Then, and only then, will your talents shine.

One of my biggest bugbears as a potential employer is the standard form CV. Why do so many kids think anyone will be impressed by a spam email begging for work? If an applicant can't be bothered to research my company and tailor an application letter to my specific requirements, why should I take the time to read it? After all, I'm looking for a spark of initiative, and the starting point is surely that an applicant invests a small amount of effort into looking up my business on the Internet, spending a few minutes studying exactly what it is we do, then stating simply and concisely why their skills will benefit my operation and how their ambitions tally with what we do. Come on, why are such basic skills not taught in university? If you're not shown how to apply for a job, what use is the rest of your course?