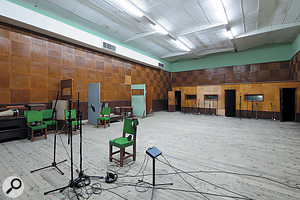 The large live area in Estudio 101 features an ambience that is unusually bright yet short for such a large space.Few countries in the world can boast a musical heritage as rich as that of Cuba, the largest island in the Caribbean. The country's abundance of styles and genres were brought to the focus of worldwide attention in 1997, with the release of the Buena Vista Social Club album, produced by eclectic American guitarist Ry Cooder and performed by a Cuban all-star ensemble. Two years later, Wim Wenders' documentary film of the same name shed a light on the studio where the album had been recorded. In many scenes the bright, large live room of Estudios Areito, with its distinct mint-green walls and well aged wooden panels, could be identified as the backdrop of the ensemble playing. It seemed the studio's interior had been untouched for half a century, developing a certain patina we can only find in the oldest recording venues in the world. 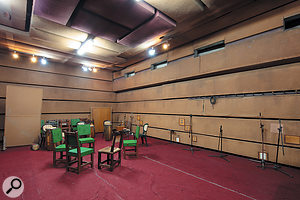 The second main live area at Areito, 102, is completely different in character from Estudio 101.And indeed, the history of Estudios Areito takes us back well into the early 1940s: not only is it the oldest and largest recording studio in Cuba, but one of the oldest surviving studios in the world. Around 1943, the musician and engineer Ramón Sabat founded Cuba's first record label and recording studio in the centre of Havana, in a 1920s colonial house which had previously served as a tobacco processing plant and a rehearsal space for the Havana Philharmonic. Sabat's company was called Panart (or sometimes Panam), short for Pan-American Recordings, and quickly became successful — although for some years to come the records weren't pressed on the premises, but manufactured in the United States. Sabat secured a distribution deal with Capitol Records, which helped to bring international talent into the studio. As well as many Cuban artists, Nat King Cole visited to record Cole Espanõl, one of the records he sang in Spanish, and singer, dancer and actress Josephine Baker also recorded there. 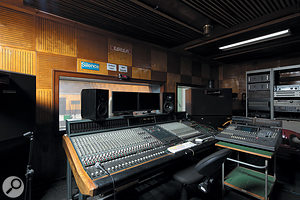 The control room is centred around a 40-input Amek Mozart console, accompanied by a Yamaha O2R.This era came to an end with the Cuban Revolution in 1959. The studio, like all other businesses, was nationalised soon after Fidel Castro took power. Interestingly, Ramón Sabat kept working at the studio, and for a short transitional period, records were released under the label 'Panart Nationalizada'. Finally, in 1964, the national Cuban record company EGREM (Empresa de Grabaciones y Ediciones Musicales, Spanish for 'Enterprise of Recordings and Musical Editions') was founded, and the studio continued business under this new name. In the 1960s, the recording venue also acquired the name it still carries today: Areito. In the native Caribbean Taíno language this means 'fiesta'! 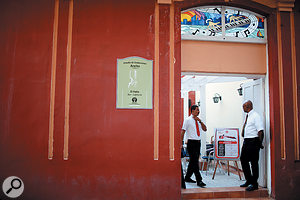 There is a small café-bar and live music venue next to the studio: El Patio de la EGREM.In this period, all kinds of recordings were made at 410 San Miguel, the street address of the studio: symphony orchestras, operas, children's music, classical Cuban rumba and son. Until the 1970s, Areito, apart from a few radio broadcast studios, remained the only space suitable for making audio recordings in Cuba, and thus played an essential role in disseminating the ideals of the Socialist revolution. Virtually all famous Cuban musicians who remained in the country have recorded there over the years, including Benny Moré, Chucho Valdés, Silvio Rodríguez and Los Van Van, to name but a few — and, of course, later Buena Vista stars such as Compay Segundo and Omara Portuondo. 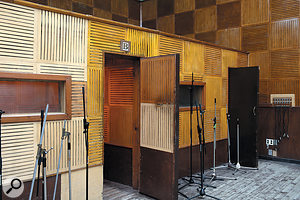 Estudio 101 offers three smaller isolation booths in addition to the large 175-square-metre hall.The heart of Areito is Estudio 101, the big room upstairs, which, at 175 square metres, can accommodate quite large ensembles. Interestingly, the hall has a comparatively short reverb for its size, and it sounds pretty special, too. Not only does the reverb retain most of its high-frequency content until the very end of the tail, but in some spots the reverb seems to become even brighter as it decays. In other words, the room sounds less lush, rich and warm than you would expect from a space of this size, but this acoustic environment seems to be particularly suitable for percussive music, and its distinctive character has, arguably, played a pivotal role shaping the sound of Cuban music throughout the decades. Most of the wall surface is covered with wooden panels acting both as diffusors and absorbers, and Estudio 101 also boasts three isolation booths opposite to the control room side. It is equipped with a 40-input Amek Mozart desk, which represents a maintenance challenge in the current economic situation, as it is difficult to get hold of replacement parts. A Yamaha 02R is thus kept as a spare unit. The studio is equipped with a Pro Tools system, but also features a wonderful Studer A80 24-track recorder. 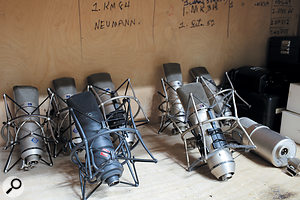 Classic Neumann capacitor mics such as the U47, U87 and U89 are the backbone of Areito's impressive collection.While there is relatively little outboard, Areito's microphone collection makes clear that the focus of the studio's work has always been on performance in the live room, capturing the pure energy of the musicians. With plenty of Neumann classics such as various U47, U87 and U89 condensers — and an assortment of dynamic mics — at hand, Areito certainly keeps some powerful means to convert sound waves into electric voltages! 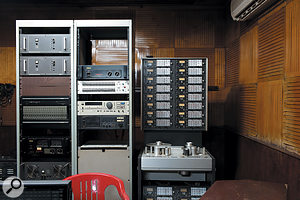 There is relatively little outboard gear at Areito, but multitrack projects can be recorded to a fine Studer A80 24-track tape machine. Below the large hall, on ground level, Areito also offers a second room, Estudio 102. At 77 square metres, its live room is still quite large, yet its acoustic properties were conceived with completely different goals in mind. Almost all surfaces, including the entire walls and the ceiling, are covered with absorbent panels, and there is carpet on the floor, too, yielding a rather dry and acoustically controlled atmosphere. In combination with the smaller floor space, such a setup is ideal for more intimate ensembles, for voice and speech recording, or, quite simply put, any sound source that does not require the vibrant and bright character of Estudio 101. Each room, by the way, is equipped with a grand piano: a magnificient Steinway D in Estudio 101, and an August Forster in 102.

Despite the upheavals that have taken place over the years, Areito remains an important asset of Cuba's cultural heritage. Furthermore, like any studio of this size, age and historical significance, it provides a glimpse into the machine room of the worldwide music production business — in this case, from a quite unique angle.