There's a place for art in almost everything — even music for TV.

At some point in the 1970s, Time magazine's art critic Robert Hughes needed someone to install a dishwasher at his New York apartment. We can scarcely imagine his disbelief at walking into the kitchen to find the renowned avant garde composing icon Philip Glass — who, at that time, was day-jobbing as a plumber — on his knees fixing plastic hoses to the rear of the appliance.

"But you're an artist!” exclaimed Hughes.

"Yes,” replied Glass. "But sometimes I'm a plumber as well.” And with that, one of the late 20th Century's most influential composers picked up his spanners and returned to his work underneath the sink.

According to the Loop Browser in my Logic software, I have 82,776 Apple Loops. That's an awful lot. If I assume that half of these are single-hit samples, that still leaves approximately 41,000 samples that have some kind of rhythmic movement encoded into them. And how many of these rhythmic sounds are listed as falling under either 3/4, 6/8, 12/8 or 24/16 time signatures? Just 319. In other words, of an entire library of loops, drum patterns, guitar licks, bass lines and so on, less than one percent aren't in 4/4 time.

You could argue that because nearly all modern music, apart from the occasional ballad in 6/8, is in Common Time, it is perhaps appropriate that most sample libraries, synths and soundware products reflect this. Last week, however, I managed to get a theme tune for a big terrestrial TV series approved by the Executive Producer which I had composed in 5/4 time. I felt like I was doing something so radical, weird and unconventional that it flew in the face of Telly Law. It actually felt… naughty. Surely it couldn't be that I'd somehow managed to trick the listener into making the lumpen and unfamiliar sound bright and accessible. I assumed instead that it was much more likely that perhaps they simply couldn't count any higher than four.

There's an old joke that says rock musicians play three chords to thousands of people, whereas jazz musicians do it the other way round. The vast majority of music briefs I see come groaning under the weight of adjectives such as 'innovative' and 'unique', yet there is so little mainstream media that truly fits either description, 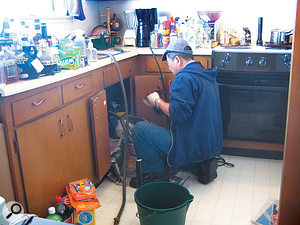 "Cor, it's a right mess down here mate. Don't tell me you've had them minimalists in again?” particularly in the insanely competitive landscape of mainstream TV. The reason is, of course, the answer to 99 percent of all questions: money. Given the size of budgets, the ephemeral nature of viewer habits and minute-by-minute ratings analysis, it comes as no surprise that in the perpetual struggle of Art versus Commerce, the vast majority of the time playing it safe in order to secure the biggest possible audience for their broadcaster's advertisers is a serious business. But occasionally it's worth reminding ourselves that, while we might be engaged in a project that is perhaps nibbling the grass on the lower slopes of credibility, every single one of our co-workers is aspiring to scale the dual heights of high art and popularity. Just because this might not be the project everyone wins awards for doesn't mean you shouldn't give it your all.

The main reason media composers are asked to toe safer creative lines is because the person commissioning you has been given similar instructions by the people commissioning them, but with a budget that has considerably more noughts on the end. Mozart's Requiem Mass was commissioned. So was the painting of the ceiling of the Sistine Chapel. So were Citizen Kane, the Mona Lisa and Beethoven's Ninth. All pictures come in (and are indeed defined by) a frame of one sort or another — and managing to be new, daring and original whilst still keeping your clients, and their clients, happy is where the real art lives.