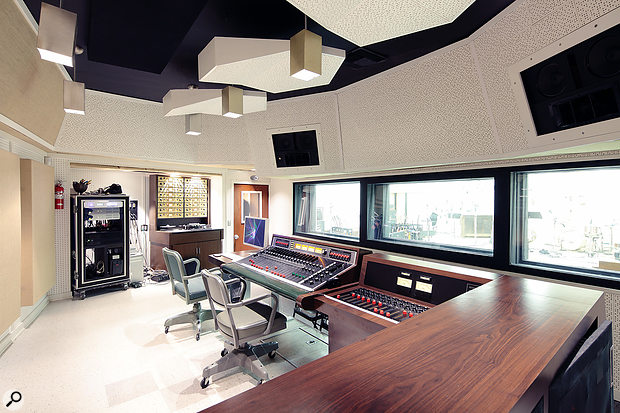 The minimalist control room in Fairfax Studio A, formerly Sound City Studio A.

When Sound City Studios closed its doors in 2011, it had been a legendary rock & roll recording venue for over 40 years. Changes in the music business meant the studio in Van Nuys, in California’s San Fernando Valley, couldn’t survive — yet, perhaps ironically, the premises have been taken over by a producer and sound engineer whose aesthetic is even more retro and analogue-based than Sound City’s. “Having a million options is not interesting to me at all!“ says Kevin Augunas, who took the place over on a long-term lease in the Summer of 2011. 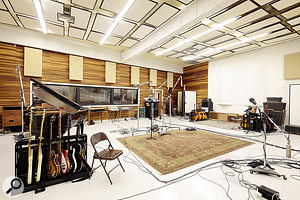 The Studio A live room has remained unchanged for decades, and is famed for its drum sounds. 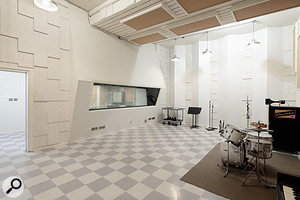 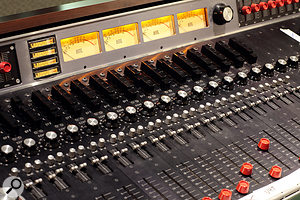 Kevin Augunas has relied on his vintage Altec 9200 console for five years. 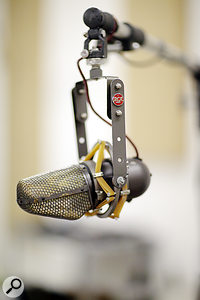 The Fairfax equipment list is short on outboard and long on instruments and microphones, such as this rare RCA KU3A unidirectional ribbon mic.True to his word, on moving in Augunas boiled down his vast collection of vintage gear to a mere fifth of its former size — a serious statement when you think that he once owned and used kit like the EMI TG12345 MkIV desk built for Abbey Road Studio 1. Instead, he chose to equip the rooms with a selection of gear that would be as uncompromising and straightforward as possible, not to mention quite different from what had been on offer in its Sound City days.

The premises were originally designed and built as a showroom for the British musical instrument manufacturers Vox, before Joe Gottfried and Tom Skeeter founded Sound City there in 1969. The studio would go on to create rock history, as documented in Dave Grohl’s 2013 film of the same name. Among the first records to be made at the venue was Neil Young’s After The Goldrush.

As the business grew ever stronger in the ’70s, Sound City installed the renowned custom Neve 8028 console that now resides in Grohl’s private studio. From Buckingham/Nicks and Fleetwood Mac, the Grateful Dead and Elton John in the mid ’70s, to Cheap Trick, Foreigner and Tom Petty and the Heatbreakers towards the end of the decade, Sound City quickly built an impressive catalogue.

The success story continued with Santana, Barry Manilow, Dio and Rick Springfield, while Nirvana’s Nevermind would prove a turning point in the studio’s history. Following its success, the biggest names in rock flocked to Sound City, including Kyuss, Rage Against The Machine, the Black Crowes, Slayer, Red Hot Chili Peppers and Johnny Cash in the ’90s, and Queens Of The Stone Age, Slipknot, Kings Of Leon and Metallica in the early 2000s. Sound City was particularly well known for the drum sounds that could be captured in the live area; but, as a tape-based analogue studio, its days were numbered in a fast-paced industry relying more and more on digital recording and production techniques.

“I moved in here because this one became available,“ remembers Kevin Augunas. “I had worked here making records for over 12 years, renting it out when it was a commercial studio, which is not really a viable business any more. When I heard the space became available I immediately contacted the owners and ended up moving in here.“ After almost half a year of extensive remodeling the new Fairfax Recording was ready for production in early 2012, with the self-titled debut album of the Lumineers, a platinum-selling top 10 success both in the UK and US.

Sound City, as befits a commercial studio, had a relatively conventional setup, but Augunas has taken a more radical approach. In Studio A, which boasts a live area of 185 square metres, and which has reportedly remained untouched for decades, even down to the original Linoleum flooring, he installed an unusual Altec 9200 console once owned by country producer Owen Bradley, and restored and customised by Ken Hirsch of Orphan Audio. However, according to Ken Hirsch, the Altec is in the process of being sold, to be replaced by the beautiful Helios desk formerly installed at Henry Hirsch’s Waterfront Studios in upstate New York (see Studio File, SOS March 2013). Studio B, meanwhile, hosts a Spectrasonics console that was previously installed at the Grand Ole Opry. 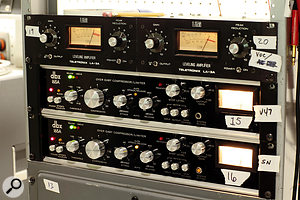 Kevin Augunas’s relatively small selection of outboard gear includes these UREI LA-3A and dbx 165A compressors.Although Kevin Augunas seems to have a soft spot for legendary consoles — even Lenny Kravitz’s REDD.37, with its Beatles pedigree, resided at Fairfax Studio A for a while — he let legendary gear such as his TG console and Fairchilds go because of their “wow factor to clients“, which sometimes seemed to suggest to people that the “gear did the work for you“. In fact, he kept only the 20 percent of his collection that saw continuous use, and some of the tie-lines from the live rooms are even hard-wired to the consoles, bypassing any patchbay, in order to maximuse sonic integrity and minimise choice.

Fairfax is thus replete with instruments and microphones, but less so with recording gear. “I am aurally taking photographs,“ he says of his working methods. “You can set up a good situation, try to make the people feel comfortable, get a good song and arrangement — it sounds so basic but it’s very hard — and then you get in the right angle, show it in the right light and then take the photo. That’s what we’re trying to do with microphones, pretty honest and pretty pure!” 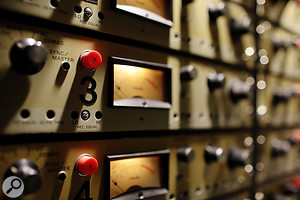 The Scully 16-track recorder is a centrepiece of the setup in Studio A.Fairfax boasts an echo chamber as well as a couple of EMT plates and AKG BX10 and BX20 spring reverbs, while the compact outboard collection includes Pultec, Universal Audio and API EQs, plus UREI LA-3A and dbx 165A compressors.

Another central role is played by Augunas’ 16-track Scully reel-to-reel recorder. With this setup, the former Sound City rooms remain an analogue studio of the highest calibre. However, free of the restrictions of needing to cater for rental clients, Kevin Augunas has been able to refine this idea and tailor it to his very own needs. In this way, a legendary recording venue survives in an even more uncompromising fashion!