Working ‘in the box’ is all very well, but what happens when the box breaks?

I bought a new Mac Pro for £5000. A few weeks later it died because the RAM failed. Apple sent me some new RAM. A few weeks later it died again and had to be sent away to the Apple authorised repair place where, after two weeks, they fitted a new graphics card and returned it to me. In late September it died a third time, and had to be sent away again. After two more weeks, the Apple repair place contacted me to say that they had replaced the CPU and the SSD, it was still not working, and they recommended that it should be replaced. 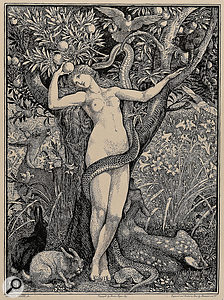 “I am merely acting as an agent in this transaction, so if you wish to return the Apple, I am unable to share your personal information with the Tree of Knowledge...”But, I was told, the Apple repair place aren’t allowed to tell Apple Care this. No. The man at Apple Care had to dictate to me over the phone precisely what the Apple repair report had to say. Using very specific, technical language I then had to tell the repair place the correct wording to put on their report, and they had to put all that in an email which they had to send to me. I then had to forward this mail to Apple because, I was told, for Apple repair to tell Apple Care about my computer violates my privacy. And this took two attempts because I’d worded it incorrectly.

It was around this time that things started to get a bit silly...

No Macs — For The Price Of Two

Before they would replace my Mac Pro, Apple needed me to supply them with the original spec and invoice because I’d bought the Mac at Apple.com and (I was told) Apple aren’t allowed to share information with Apple, as this would violate my privacy. To try to speed things up, Apple helpfully offered to ‘sell’ me a new Mac Pro. In other words, they would put a ‘hold’ on another £5000 from my credit card and send me a new machine; then, as long as I returned the dead one to them within 14 days, they wouldn’t take the money from me.

Unfortunately, the dead Mac was still at the Apple repair place, and apparently, Apple repair “aren’t allowed” to send computers direct to Apple. So, I nervously gave my credit card details and awaited a replacement Mac Pro. At this point, I was 10 grand down, with no computer to show for it. Eventually, the new Mac arrived — as did the dead Mac Pro from the repair place. In its box. With a slightly ominous rattle, which I very much hoped wouldn’t count against me if it ever made it back to Apple. And here’s the thing. Apple are responsible for picking up the dead computer from me — and, at the time of writing, they haven’t. In other words, if Apple miss their own deadline and don’t pick the dead computer up within 14 days, they get to keep my £5000. Pretty neat, huh?

Over the course of the past month I have been on first-name terms with at least seven Apple employees. Through dealing with numerous emails, hours of phone calls and web chats, I now know both my 10-digit case number and the 12-digit serial number of my dead computer off by heart.

I’m an Apple shareholder, a Mac apologist, someone who has given free seminars at Apple events in their stores, but none of that should matter. We are not kids trying to work the system to get an iPod upgrade. These are significant tech investments at the heart of our studios, and when things go wrong, it hurts us. This sort of experience reminds us just how many of our creative eggs are in one basket, especially for those of us who also use Logic — and to see the people responsible for our hardware, OS and DAW behaving like this when a catastrophe happens is a sobering experience. Pro users represent such a tiny fraction of Apple’s vast turnover, it’s easy to be nervous about what we will do if they eventually decide to stop caring about us altogether.