Hollywood remains arguably the recording capital of the world, housing as it does a staggering number of world-class facilities within a few blocks of each other; and Henson Recording Studios is one of the most important of them all. The name might be less familiar than those of other neighbouring landmark studios, such as Sunset Sound, which have remained the same throughout the decades., but the studios now named after the Jim Henson Company, which famously produces the Muppet Show and other TV shows, have a rich history tied to some of the biggest names in the history of recording. Until the late '90s, the studios were headquarters to A&M, the record company founded by Herb Alpert and Jerry Moss in the early '60s.

The facilities themselves have been in show 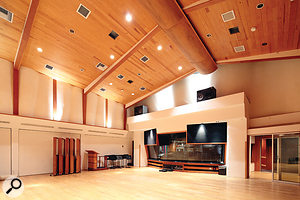 The capacious live room in Henson Studio A. business for almost 100 years. In 1917, Charlie Chaplin founded his studios on La Brea Avenue, and A&M took over the entire lot in 1966 when their growing business demanded dedicated production and office spaces. Alpert and Moss had founded A&M records in Herb Alpert's garage in 1962, and only a few years later, the company had already had their first chart-toppers, earned their first Grammys, and were grossing millions. Time to move on! When A&M bought the Chaplin studios, they moved in with over 30 employees, and they hired the engineer Howard Holzer, who conceived the custom HAECO (Holzer Audio Engineering Company) consoles which were installed at the studios, based on components such as Spectrasonics EQs and Stephens operational amplifiers.

Only two studios were planned in 1967, but growing demand led to the addition of a third studio in 1968. Several mixing rooms and other facilities such as echo chambers were added in the following years, and the Henson Recording complex still includes studios A, B, C and D as well as an additional mixing studio. 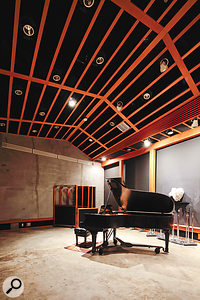 The first recording session at the newly founded A&M Studios was the album The Fool On The Hill by Sergio Mendes & Brasil 66, and virtually all of the artists signed to A&M followed their path in one way or another. In this period, many notable recordings by A&M artists were crafted here: Burt Bacharach created many of his classics at A&M's studios, and so did Wes Montgomery, the Tijuana Brass and many more. Other A&M artists chose 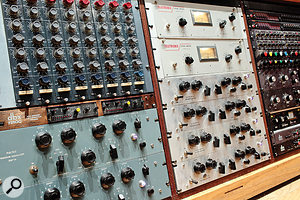 All Henson control rooms boast a similar outboard setup, including eight Neve modules, Pultec and GML EQs, and classic dynamics such as the Teletronix LA2A and Urei 1176LN.to record in different studios but returned to the mothership for mastering. In the late '60s, Bernie Grundman was hired as in-house mastering engineer. He stayed with A&M until he left in 1984 to found his own mastering studio.

Around 1970, all A&M rooms were equipped with 16-track machines. Soon enough, musicians signed with other labels heard the call, and John Lennon and Joni Mitchell were among the first non-A&M artists to record at the studios. During the '70s and '80s, many classic albums were mixed and mastered at A&M, including U2's Rattle And Hum and Prince's Controversy. Other important names who have worked at A&M include Quincy Jones, Billy Preston, Supertramp, Cher, Kiss, Phil Collins, Dionne Warwick and Stevie Wonder.

In order to maintain their success, the studios were remodelled in the mid-'80s. The rooms were rebuilt and the equipment updated, and in 1986, A&M installed the magnificent AIR Montserrat Neve console at their Studio A. Believed to be the last original desk ever built by Rupert Neve, it belonged to George Martin before it found its way into A&M's Hollywood facilities.

Eventually, in 1989, A&M was sold to Polygram. However, Alpert and Moss continued to manage the record label until 1993. In 1998 Polygram were taken over by Seagram and merged with Universal Music Group, who, in 1999, closed the entire former A&M lot on La Brea. The Jim Henson Company acquired the premises in the same year and reopened the recording studios in 2000, under their current name Henson Recording Studios. 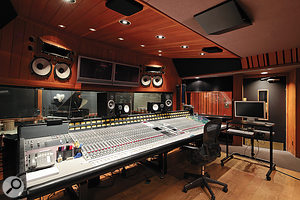 Today, all the Henson studios are equipped with SSL consoles, like this 6056E/G in Studio B.

Today, all of the large rooms remain in operation. The flagship Studio A boasts a live room with a 140-square-metre floor space, an additional isolation booth and a spacious control room centered around an SSL 9080 J-series console. All other rooms are equipped with soundboards by the same manufacturer: Studio B is home to a 6056E/G, Studio D boasts a 4072G+, while Studio Mix offers a 6072E/G. Studio C is under a long-term lockout and not directly available to outside clients.

In addition, all the control rooms maintain the same high standard of outboard gear. As in most commercial studios of this size, the focus isn't so much on esoteric, highly specialised equipment, but more on industry standards — including a rack of eight Neve input modules (mostly 1064 and 1089), a few Pultec and GML equalisers, and classic dynamics processors such as the Teletronix LA2A and LA3A, Urei 1176LN and Dbx 160. In addition, every single control room keeps a Fairchild 670!

Unsurprisingly, the studio has precious microphones by the dozen, 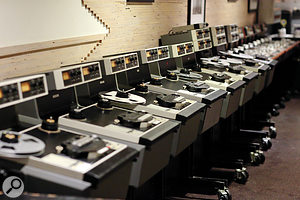 Need more tape machines? Henson can probably find them! including 10 RCA ribbon mics (44BX, DX77 and BK11A), 10 Neumann U47 and U47 FETs, 14 U67 and M269cs — and the list goes on. A Studer A800 MkIII is always available in every control room, and Henson still keeps over 20 additional tape recorders on standby, all lined up in one of the hallways, and ready to use.

With such a large and well-equipped facility at their disposal, Henson Recording Studios continue to cater to a superstar clientele. With the studios' 50th anniversary not far over the horizon, the exceptional aura of the rooms and the quality of the facilities still attract names such as Justin Timberlake, Bruce Springsteen, Paul McCartney, Herbie Hancock and many, many more.