Music commissioning has always been squalid. But today's composers get a fairer deal than Mozart ever did.

The 18th Century Austrian aristocrat Franz Count von Walsegg was an amateur musician who had a habit of paying notable composers to anonymously create musical works in order to pass them off as his own. When his wife died in 1791, he urgently sent a messenger to knock on the door of the permanently broke Wolfgang Amadeus Mozart. The great man was asked to compose an epic Requiem mass which the count could perform in her honour and pretend he'd written himself. Classy.

Almost certainly in great need of the 50 ducats (about £85) offered for the gig, Mozart accepted the commission and threw himself passionately into his work. Famously, the job killed him, and he died leaving one of the finest musical works ever written in a desperately unfinished state. Unfortunately, Mozart's long-suffering wife Constanze had to pretend that her husband had actually finished the Requiem before he died, in order that the Count could be certain no-one found out about the secret vanity deal. So she hastily assembled a group of Mozart's contemporaries and students to piece together what was left from his sketches in order to deliver the music on time and get paid.

They even faked poor Mozart's autograph on the bottom of the score and curiously dated it 1792: a year that the composer himself never actually lived to see. The last words on the score that were actually written by Mozart himself were "Quam olim da capo” — an instruction in the Domine Jesu section to repeat one of the fugues — and when the manuscript was displayed at The World's Fair in Brussels in 1958, some disrespectful bastard tore off this corner and ran away with it.

Despite being a gloriously enormous piece of work set in a minor key, the Requiem itself ends on an unexpectedly major chord, and while media composers might sympathise with, and find familiarity in, the dignity-free catalogue of hoopla, flimflam and bullshit that surrounds this depressing tale, its upbeat conclusion should also teach us a few things about the benefits we are lucky enough to enjoy. Acute Rheumatic Fever, the most likely cause of Mozart's death, is now treatable with antibiotics; and thanks to the wonders of PRS membership, we can never fully relinquish our compositions to a third party. It also shows us that there will always be people willing to pay for quality musical work, however hard a deal they drive. 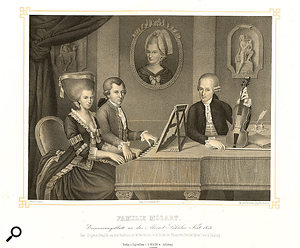 Adding to Mozart's woes was the crippling burden of maintaining his sister's hair-care regime. Good composers (and their spouses) will still understand the importance of meeting a deadline even if you happen to no longer be alive, and most importantly, if you can get it right the world will be listening to your work long after you've gone.

Finally, let's not forget that Mozart chose commissioned composing over all the other career choices open to him. He could have earned more money teaching or on concert tours, but a composer was something he was, not something he did. What's more, he surely loved every minute of it, as exemplified by the 1782 canon in B flat he wrote for six voices entitled simply "Leck Mich Im Arsch” (Lick Me In The Arse). Punk rock had its moments of genius. Blues, jazz, R&B and techno have all left their mark, but truly we will never see his like again.