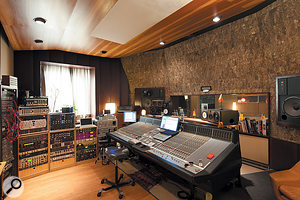 The control room is centred around a 40-input SSL J-Series console.London’s Abbey Road Studios were originally named EMI Studios, and there was a time when the EMI company operated a large network of recording facilities all around the world. As early as 1925, a German branch of the business called Electrola was founded near Berlin by EMI predecessor The Gramophone Company. However, most of the German facilities were destroyed during World War II, and the political situation in Berlin remained unclear even after the war had come to an end. Ultimately, EMI Electrola was relocated to Cologne, where the company found a new home in a former rubber factory in the borough of Braunsfeld.

EMI Electrola reopened in Cologne in 1953, and for many years, the building at Maarweg 149 161, which lent the studio its current name, housed the entire production chain, from the talent performing in front of the microphones to shipping the finished records. The first recording studio on site was constructed in 1956, and soon after there were mastering, lacquer-cutting and galvanic facilities on the premises, too, and also a record-pressing plant and the offices of the record company. The late Electrola engineer Peter Burkowitz also designed the mixing desk which would become the REDD.17, the grandfather of all EMI recording consoles. 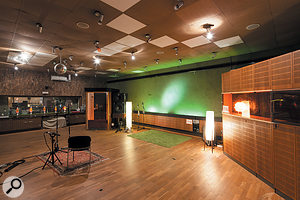 After decades of successful business, the company was merged with Virgin, and went through a few structural changes. The vinyl pressing plant was closed in 1993, and the recording studios followed in the late ’90s. A few years later, around 2004, the lease of Studio 2, the largest of the former EMI rooms in the second floor of the building, was taken over by German record producer and engineer Wolfgang Stach, who subsequently rebuilt the facilities. Most of the original equipment was long gone, but the rooms remained in their original shape from the early ’70s, boasting plenty of cork panels and walnut inlays bearing the patina of decades of record making. 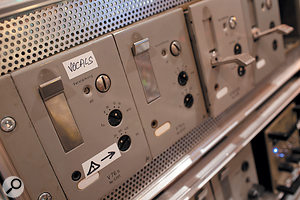 Maarwegstudio2 boasts four Telefunken V76 preamps, considered by some to be the best valve preamps ever made. 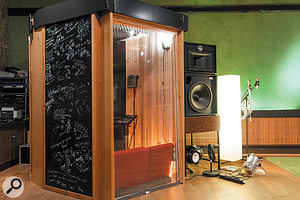 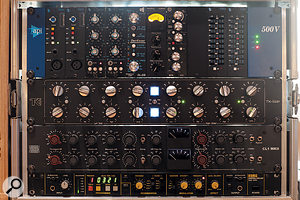 The outboard collection includes industry-standard preamps, EQs and dynamics by API, TK Audio, A Designs, Vintagedesign and many more, along with more unusual units such as the Ursa Major Space Station. 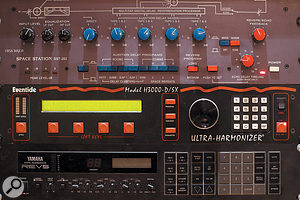 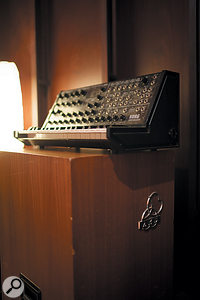 This Korg MS20 resides on the most solid of keyboard stands: an AKG BX20 spring reverb unit.Today, Maarwegstudio2 retains the 150-square-metre live room that was the largest of the former EMI rooms, plus a 40-square-metre control room and a few additional facilities. One of the three isolation booths in the live room can serve as an additional control room, and there is a second project studio and also a dedicated SSL mixing room on site. Wolfgang Stach is also building a new community around the former EMI recording venue. Following his success, the ground floor and the first floor have been converted to music production spaces, too — an important development for a city like Cologne, which has always been a media capital and is still home to major German TV networks, but which greatly suffered as a music production location when the remains of EMI Germany were merged with and moved to Universal’s headquarters in Berlin.

The current technical setup at the studio includes a more than healthy selection of outboard units, microphones and instruments, all centred around a 40 -input SSL 9000 J -Series console. As Wolfgang Stach puts it, musicians only have to bring themselves and their ideas to the studio to craft their production, as the studio not only has excellent recording facilities, but also a great variety of backline and instrument options.

The outboard collection encompasses not only industry standards such as Urei and Purple Audio limiters, API 512c, 550a and 560 modules, as well as a number of Chandler and Daking units, but also more specialised tools such as the impressive SPL PassEQ equaliser, and there is also room for vintage gear. Maarwegstudio2 has four Telefunken V76 modules — among the most sought-after valve preamps — and the racks are also home to coveted vintage effects units like an Ursa Major Space Station SST 282 reverb, Roland Dimension D chorus and RE 201 Space Echo, and there’s a chunky AKG BX 20 spring reverb hidden behind the console, too. Besides large keyboard instruments such as the Yamaha C7 grand piano, Hammond B3 organ and Fender Rhodes Mark 1 piano, the studios offer a selection of synths and guitars, as well as amplifiers by Orange, Sound City, Fender, Marshall, Ashdown and the like. The mic locker includes Neumann classics like the U87, TLM49, KM84 and KM184, a few Brauner Valvet and Phantom mics and Royer R 121 ribbons, as well as desirable offerings from Schoeps, Sennheiser, Beyerdynamic and Shure.

But what would a great recording venue be without great artists putting all these treasures to use? In the EMI days, many notable records were crafted on the premises by artists as diverse as German Schlager king Heino, influential post-punk band Fehlfarben and actor/singer Herbert Grönemeyer, as well as international clients like Tina Turner and Pink Floyd. More recent clients of the Wolfgang Stach era include Gentleman, Mando Diao, Jupiter Jones, Jasper van’t Hof, Dominic Miller, Max Herre, Frida Gold, and many more.