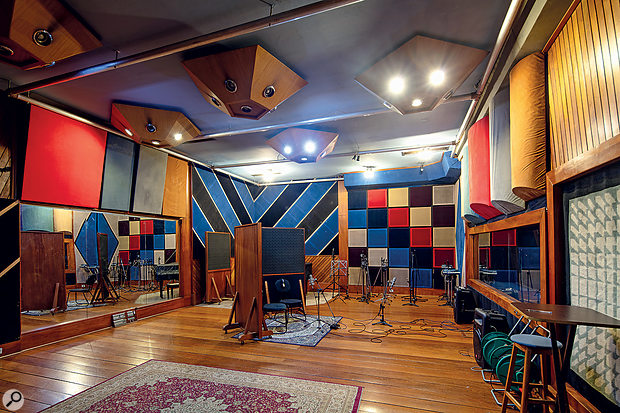 The spectacular Studio A live room occupies over 100 square metres, with four-metre-high ceilings.

The largest country in South America, Brazil boasts a musical history like no other, spanning classical music, heavy metal, hip-hop, rock and numerous electronic genres. Some genres have their spiritual homes in particular cities: for instance, it is widely accepted that bossa nova, one of Brazil's most famous musical exports, first emerged from Rio de Janeiro. However, the largest Brazilian city, São Paulo, can be seen as the country's overall cultural and business centre. With a population of over 30 million in its greater metropolitan area, São Paulo is not only the largest city in this continent, in the Western and Southern Hemispheres, but also the 11th largest in the world! 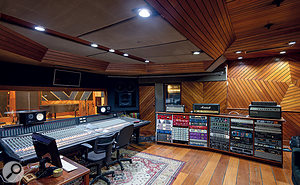 A DDA desk occupies pride of place in the large Studio A control room.There has long been a thriving music scene in São Paulo, and where there is music, there are recording studios! No surprise, then, that one of the largest and most active studios in Brazil has been operating there for 40 years. MOSH Studios takes its name from the initials of the two founders, Oswaldo Malagutti Jr and Hélio Santisteban. Malagutti recalls setting up the studio in the '70s: "My career as bass player and singer in bands began very early in 1962, playing covers of the Shadows, the Ventures, the Beatles and Stones in several rock bands. After 1972 I had a great success with the band Pholhas. I've always had an interest in electronics, PA systems and audio recording, and I have learned a lot at RCA studios. We were artists on the RCA label where we recorded some Brazilian hits that reached sales of over three million records at the time, and after a while we decided to build our own studio." 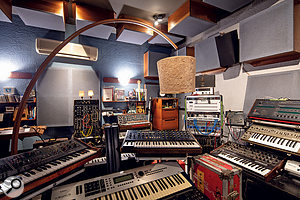 The post-production suite houses a collection of rare keyboards and synthesizers, including a vintage Moog System 15.This first studio was located in São Paulo's neighbourhood of Pompeia, and openend its doors at the end of 1979. First equipped with a Sound City console and an MCI JH8 tape recorder, MOSH became busy very fast. Co-founder Hélio Santisteban left the company in 1983, but the studio was thriving regardless, and eventually it outgrew its first facility: more space was needed, and there were problems with neighbours. Malagutti found a new place in a former jewellery factory in the Água Branca district of São Paulo, a commercial area that provided everything he needed: soundproofing, easy access, ample parking lots, and space to grow. The current MOSH premises were designed by Jeff Forbes, and were ready for recording in 1988. The initial MOSH Studio A was followed by Studio B in 1990, Studio C in 1992, Studio VIP in 1994 and Studio D in 2000, and today MOSH is a seven-room facility, with spaces ranging from smaller suites for mastering and post‑production to the large flagship rooms. 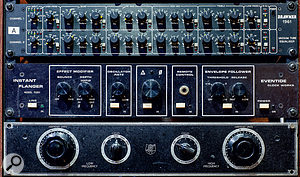 The outboard in Studio A includes rare units such as an Eventide Instant Flanger and a UTC 4-B filter.The heart of MOSH is still Studio A, which, bar minor refurbishments, remains in its original condition. With a live room of 100 square metres and a control room a little more than half this size, it offers ceiling heights of over four metres. Beautiful woodwork and bold and unique colour patterns in the live area add to the expansive ambience. Equipped with a 56-channel DDA console and Studer A827 tape recorders, integrated into the digial world with a CLASP 24 system, it also boasts a huge outbard collection. The six side racks are occupied by several Pultecs, a DW Fearn VT-1 preamp, Focusrite Red Series units, a Manley Voxbox, seven Amek 9098 channel strips and several UREI LA-4 and Purple Audio MC76 limiters, amongst many other high-end units. 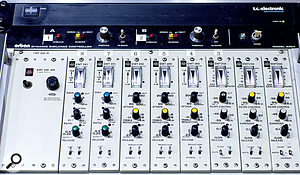 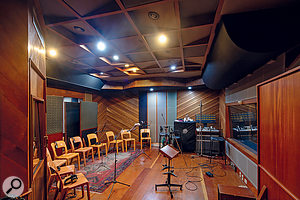 Smaller than Studio A, MOSH Studio B is nevertheless generous in size.Studio B is also built around a 56-channel DDA; its rooms have smaller proportions, yet the live area is still big enough to host a dozen players at the same time. The largest space of the facility is Studio C, with a live area space of 130 square metres. This multi-functional room serves as recording space for orchestras, but also as a filming stage. Studio D, meanwhile, is based on a 96-channel SSL Axiom digital console and boasts the largest Pro Tools system in the entire facility, again with plentiful analogue outboard.

Malagutti's favourite room is Studio VIP, equipped with a vintage Neve V2 console from 1984. "It first belonged to Record Plant Studios in New York, and it came to Mosh in 1993," Malagutti explains. There is a fully equipped mastering room, and also a post-production suite that is now home to an enviable synth and keyboard collection that includes a vintage Moog System 15 modular synth. On top of that, MOSH offers a collection of over 150 microphones.

Over the decades many famous musicians have worked at MOSH, which today also runs a record label and offers artist development and management plans. Famous Brazilian artists who recorded at MOSH include Zezé di Camargo & Luciano, Leandro e Leonardo and Chitãozinho e Xororó, all of whom have sold dozens of millions of records, as well as legends Roberto Carlos, Caetano Veloso, Rita Lee and the heavy metal group Sepultura. International clients include Sérgio Mendes and Black Eyed Peas, amongst many others.