The Shape Of Things To Come By Dave Lockwood

Hot news in Issue One was that Aphex were launching a more affordable version of their patented harmonic‑generation processor, in the form of the Aphex Type C. Our 'bold' visual style statement, turning an inconveniently shaped picture through 90 degrees to fit it into a single column, may have been ahead of its time... Further down the story, there's a reference to Aphex's new "intelligent 3‑band limiter, incorporating a Transient Enhancement Circuit that actually increases your perception of transients whilst maintaining absolute peak limiting”. Sounds like half the software we've looked at in the last couple of years, but this, of course, was hardware. 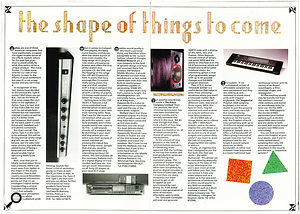 The latest Sony CD player gets a plug — "Sony envisage the CD market really going places this year” — but gets a Sound On Sound angle with a tip about how to use the programmable index points as a sampling aid. Copyright, anyone? Nah, it's 1985 and nobody's been sued yet.

The small‑to‑medium‑sized monitor market, dominated in 1985 by Tannoy, JBL and Yamaha, is represented by… Wellard Research, with their Middle Monitor. Having built‑in power amplifiers in 1985 does indeed mark them out as The Shape Of Things To Come, but aside from the fact that SOS front‑cover featured Midge Ure once owned a pair, I can find nothing more to tell you about them. Somebody out there doubtless knows 'The Wellard Story'...

"The Bokse Company Limited” (we couldn't just say Bokse?) has an entire two columns worth of products: US8 Universal Synchroniser, Timecode Controller, ATS3 Active Timecode Splitter, MPS7 MIDI Patch Selector and MIDI Humanizer. And I remember actually finding some of those exciting.

Apart from the whole timecode and MIDI‑sequencing movement, affordable sampling was 1985's big thing. The final news story is given over to Sequential's Prophet 2000 sampling keyboard: 8‑note polyphony, up to 16 different sound samples spread across the keyboard, a more traditional synthesizer section with on‑board waveshapers, filters and so on, an arpeggiator, and a 20kHz audio bandwidth giving three seconds of sampling time. OK, you probably missed that — THREE SECONDS of sampling time. Yes, that's how much you could get from the on‑board 256k of RAM. Need more? Just cut the audio bandwidth down to 8kHz and you've got a whole eight seconds to play with! Vienna Symphonic Library it isn't, but to put it in some kind of perspective, 256k was eight times as much memory as found in the computers that helped put the first issues of SOS together.

Finally, there are what can only be described as three coloured shapes in the corner of the page. They can only be described as that because that is what they are. It is said that their true meaning has been lost in the mists of time, but that if you stare at them close‑up for long enough the colours will begin to dance in front of your eyes and you will start to feel nauseous. So just don't, OK?