A modern media composer's repertoire needs to encompass everything from fugues to farmyard noises. 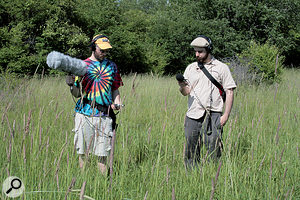 "Sod this for a game of soldiers. Let's go to the pub. We can always ask that Farrer bloke to fill in on the duck noises.”

One September evening in 1592, following a particularly heavy night of making merry — involving what was described by contemporary accounts as "a banquet of Rhenish wine and pickled herring” — the Elizabethan playwright Robert Greene stumbled into his bed and died. He seems to have known his end was near, because before he snuffed it, he managed to write a quick letter to his wife begging forgiveness for his wild womanising ways and asking her to settle all his debts. It was certainly a productive last night on Earth, as he also apparently hung on long enough to knock out a brief but pithy literary review entitled 'A Groat's Worth of Wit'.

Although packed full of terrible sixteenth-century spelling, this review contains the earliest known reference to a brash young William Shakespeare's work as both an actor as well as a writer. And the soon-to-be-late Robert Greene is not at all impressed. In addition to accusing the upstart Shakespeare of being a badly dressed, conceited plagiarist, Greene also derides Shakespeare as a Johannes Factotum or Jack of all trades, claiming that anyone who acted couldn't possibly be any good at writing as well.

I'm not sure what Robert Greene might make of the huge number of disciplines needed to be a modern media composer but, for most of us, being able to turn your hand to anything is the most important part of the job.

I was commissioned last month to compose the music for a knockabout comedy show all about animals. It was a cutesy, fun, tea-time programme, and although the music I'd come up with was suitably madcap, the producers felt it was still lacking something. I'd tried beefing up the ukeleles, the slide trombones and the silly percussion but still they weren't feeling it. In exasperation I jokingly suggested over the phone that I cover it in comedy animal noises — and they ripped my arm off. So, that afternoon, I spent a few hours in front of the U87 clucking, barking, mewing and mooing.

The entire time this antidote to dignity was unfolding in my studio, all I could think of was that the best description of the media composer is perhaps the one-man-band on the street corner with the bass drum on his back, a kazoo in his gob and a pair of cymbals between his knees. My pop shield was covered in spit, my kids were standing in the doorway suspecting their father was having a slow mental breakdown and that's not even the worse part: the producers loved it. They were thrilled. So happy were they, in fact, that the Executive Producer insisted I be paid £250 above the quoted music budget, simply because I'd gone beyond both the call of duty and the call of the wild. The cheeky bastard.

I've worked hard all my life, I've had some outstanding good fortune, but the thing I love most about my job is that I can now rightly refer to myself not just as an animal impersonator, but as a Professional Broadcast Animal Impersonator.