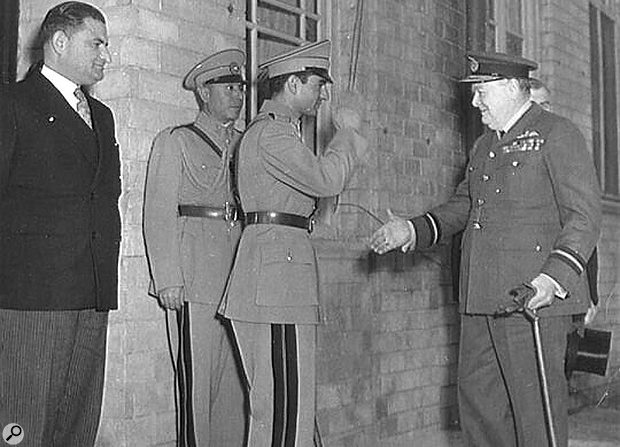 Winston Churchill achieved more in one lifetime than almost anyone else. However, he never quite got the hang of high fiving.

The secret of success is to deal with failure in the right way. Which is easier when your failures don’t cost thousands of innocent lives.

Adolf Hitler was, famously, a teetotal vegetarian. In contrast, Winston Churchill drank so much booze across the working day for the majority of his adult life that many of those around him were astonished he lived as long as he did. He smoked like a chimney, was rude, inconsiderate and dismissive to those he worked with, suffered from depression, popped barbiturates like Tic-Tacs and by modern standards was nothing short of a terrible racist. He was, however, one of the finest, most brilliant people to draw breath in the past 200 years, and the facts and figures of his astonishing life almost redefine the very meaning of the word ‘achievement’.

Churchill also knew a thing or two about failure. In 1914, as First Lord of the Admiralty — at the time, probably the most powerful military role in the world, and a position he achieved aged just 37 — he championed a disastrous naval campaign in Gallipoli, Turkey, which would ultimately cost him his job. In the face of a seemingly fatal blow to his political career, this world-famous aristocratic statesman, born into immense privilege at Blenheim Palace, grabbed a rifle, strapped on a helmet and went off to fight in the trenches of World War One, inches from death, knee-deep in the mud, blood and barbed wire.

In the front lines of the media composing game, you never get asked to write music without your clients having at least some idea of what they want it to sound like. Very often, these musical ‘steers’ will be based less on stylistic or production merit and more on the fact that they were used on successful projects, the magic of which the producers would like to emulate. This explains why you sometimes read baffling briefs that include soundtrack references you should draw from like Coronation Street, Call The Midwife and Blade Runner.

Recently I got a brief, which was also sent to a number of other composers, to pitch for a job, and the two ‘Must Sound Like’ reference tracks were both theme tunes from shows that I’d composed. I’m the least complacent person you could ever meet. I understand the ephemeral nature of this game and how you should never take anything for granted, but felt I was at least fairly well qualified for the role. I threw myself into it and wrote half a dozen demos, delivered with imagination and passion.

I didn’t get the gig.

So, either I don’t sound very much like myself any more, which is perhaps artistically encouraging; or, I’m getting worse at what I do, which is less encouraging; or any success I’ve had previously has been the result of simply having been in the right place at the right time with a demo that is approximately the correct length. Which is not very encouraging at all. Either way, setbacks are part of what makes you good. In terms of your creativity, your ideas or your career, you can never learn much from success, but you can learn from your mistakes.

Keep On Keeping On

There is a sweet spot somewhere between the cloud of crippling self-doubt, and being driven enough to keep submitting musical ideas in the knowledge that there is always someone hungrier and keener than you. And that sweet spot is where you work and where you take criticism and indifference on the chin and keep going.

Churchill described success as the ability to go from failure to failure with “no loss of enthusiasm”, and while missing out on the chance to write music for a light entertainment television programme is, I’ll grant you, not really in the same league as being responsible for one of the key British military defeats of the 20th Century, we are all fragile little snowflakes in this business and we like to think that our pain is still real.