Don’t get too carried away at the idea of seeing your name in lights. For one thing, it might not be your name, exactly...

To fully understand your place as a composer in the TV and media world, try to understand the importance given to on-set catering. Just like composers, there are many, many catering companies, all trying to give the impression of being bigger, more capable and more experienced than they really are. Just like us, they invest in technology, and need to understand industry trends and the expectations of their TV clients. And just like us, they can recycle. 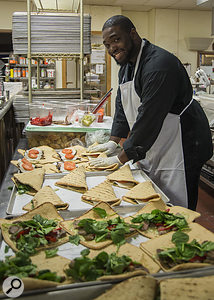 Uncredited in the previous episode, Scott had decided to revenge himself on the production in the only way he knew how.Photo: Melissa EstevezIf no-one at the BBC liked the bean chilli they made on Tuesday, there’s no reason at all why they can’t repurpose it as spicy Mexican lasagne for ITV on Wednesday or, at a pinch, trifle for a music library at the weekend. What caterers do impacts on all levels of the production, and when they get it wrong, everyone notices. Yet when did you last see an on-screen credit for the person who made the sandwiches?

Credits are an odd concept. The surgeon who removes your appendix doesn’t get to tattoo her name above the scar she leaves in your tummy. The motorway bridge you just drove over doesn’t come with a plaque listing all the designers, surveyors and builders who made it. So why should we get a credit? Well, often, we don’t. TV credits are entirely at the discretion of the broadcaster, meaning that the ultimate buyer of the program gets approval of who should be listed at the end and in what order. But at the same time, for any reason at all, they can end a programme at any point, with no recourse to explain themselves.

Most music commissioning agreements reflect this, saying something along the lines of “We will credit you as ‘Music by you’ — but if we forget to do this, or someone else takes your name off, tough cheese because we are bigger than you and it’s not showoff, it’s show business.” You sign this of course and hope. Because them’s the rules. A Keira Knightley movie used some of my music a few years ago, and every single contract that the producers sent me from Hollywood had my name spelled four different ways, none of them correct. Each time, I pointed this out and made corrections to the draft contract before sending it back to them. And each time, along with an apology email, came the ‘amended’ contract with my name spelled incorrectly just as before.

After eight exchanges of this kind I gave up and took their money. Some weeks later, I sat in the cinema waiting until the end, to see that they had found a totally new way to mis-spell my name which hadn’t featured in any of the contracts I’d seen up to that point. What Hollywood lacks in respect it certainly makes up for in creativity.

At the lower end of the showbiz scale, a Channel Five series I scored recently missed my name off the credits altogether. And when the same production company approached me for the next gig, I had this horrible moment of not knowing whether to make a bit of a stink about it all. Credits are a commodity to us. It’s our shop front, and we hope that potential clients will see us on there and our contribution will be recognised. But at the same time, you can’t really do this job if ego and self promotion is your ‘thing’ either, and no-one wants to be accused of having an Elton John-type strop. So we sort of default to being humble and quietly bitter that, amid the chaos of the production office we somehow didn’t make a big enough impact to be remembered by the unpaid 19-year-old work-experience intern who only started that morning, and whose job it is to type up the credits then make everyone coffee.

The opposite of love isn’t hate, it’s indifference.