We all like adding new technology to our studios, but progress comes at a cost. 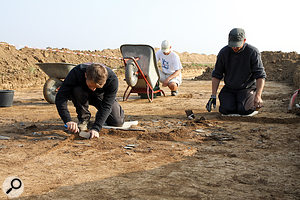 "We'll be into Mesolithic strata soon. The installer disk for Arboretum Hyperprism has to be here somewhere.”

A Daughter Of The Gods was a 1916 silent movie which was notable for quite a few reasons. It was the first major motion picture to contain footage of a completely naked lady (the dashing Australian swimming star Annette Kellerman) and it was also, much to the horror of studio boss William Fox, the first film ever to cost a million dollars. In keeping with many silent films of the age it was accompanied by a full orchestral score, by Robert Hood Bowers, which would have been performed live at each screening. What an awesome cinema experience that must have been!

Unfortunately you'll never see it, because the entire film has been lost forever and only a handful of production stills and a few seconds of footage have survived. According to Martin Scorsese's Film Foundation 50 percent of all American films made before 1950, and more than 90 percent of films made before 1929, are gone forever. This is a terrifyingly high number, and the list of films that have been lost to the mists of time continues right into the 1960s and 1970s, and includes by name directors you will have heard of.

Archiving is such an important process for the media composer. Just yesterday, I got an email from a TV company asking for all of the music files I created for a show from more than 10 years ago. Fortunately I had all the mix AIFFs to hand and was able to simply upload them to a server. They are doubly lucky, as pretty much everything I did before then was mixed to DAT (ask your dad). But I shudder to think what kind of antique state the Logic song files must be in, should they need any changes and I have to load them up. I imagine they would have been created in Logic 6 or 7, and almost certainly would have been recorded using physical synths and sound modules I no longer own and plug-ins that no longer work.

What's worse is that the race towards obsolescence is continuing at frightening speed, and we are all seemingly happy to pay for it. The upgrade to Logic X sees us all having to get rid of our beloved 32-bit plug-ins, just as a mere five years separated the arrival of Apple's first Intel machine in January 2006 and OS 10.7 'Lion' in 2011, which killed support for those older PowerPC applications we all had been using happily on Macs for years. Similarly, I'd imagine that anyone who has invested heavily in PCI cards for their DAW over the years would have greeted news of the arrival of the new whizzy, shiny sealed-unit Mac Pro with much the same enthusiasm that you'd welcome a vegan to a barbecue.

It's increasingly difficult to not sound like you are slipping into grumpy old Luddite territory when you consider these kind of 'developments'. I'm a huge fan of progress, but being forced to retire significant chunks of your production toolkit is a big deal for audio professionals. Third-party plug-in developers go bust, get bought and often just can't be bothered to keep up the insane pace of change, which gives us less confidence when it comes to investing in their products in the first place. And anyone who has ever tried to create a soundtrack exclusively using Logic's own native plug-ins will have a unique insight into just how satisfying for the audience silent movies must really have been.