If you thought music for media was a tough job to get into, you should see how hard it is to get out of. 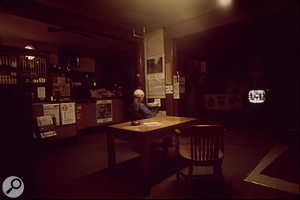 "Thirty‑seven years I've been watching, and they still haven't used my bloody music.”

I started in this business when I was 16, and as I approach my 40th birthday, I've been reflecting on how hard it is to even consider taking a break. The nature of the job, along with the incredibly long gestation period that many TV, game and media jobs have, means that you can sometimes have a huge number of projects up in the air at various stages of completion at any one time. So if I wanted to take, for example, a six‑month sabbatical, I'd have to start turning down work a year in advance. And that's just silly.

Throw into this paranoid mix the fact that the vast majority of a TV composer's income on any job comes from performance royalties and, of course, you can never tell how successful any project is going to be, how much of your music they'll use, which channel it'll be on, at what time and for how long, and every job is basically a lottery scratch-card. We work in a business where a last‑minute £500 theme tune that might take just a few hours to put together could be your retirement plan, while five months of hard graft on an epic soundtrack might never be broadcast at all. So what do we do? We keep saying 'Yes!' to everything. Forever.

It's like Hotel California: you can check out anytime, but you can never leave.

I was immensely privileged to spend a couple of hours over lunch with Monty Norman recently. In this game, Monty is as big a legend as they come, having composed one of the most recognisable and endearing pieces of music of the 20th century — the James Bond theme. The day before we met, he had just celebrated his 84th birthday, and yet he bounded into the restaurant like a teenager. His energy and enthusiasm were an inspiration, and he made the point that in this game you can never really retire, you just keep going — because making music isn't so much a job as it is a compulsion. And as retirement and loss of purpose seem to be the biggest killers of old people, there's really no reason why we should ever feel the need to stop doing what we do, or, perhaps more accurately, to stop being what we are.

There are days when we all feel that creativity is like trying to push a shopping trolley the wrong way up an escalator, but it's sobering, impressive and not a little bit terrifying to know that there are those working among us who can wistfully look back on their body of work and ask 'Has it really been 17 years since the 50th anniversary of me starting my career in the music business?'