One of the oldest and largest recording studios in the world, Fox's Newman Scoring Stage is still in constant demand for top-class film scores. 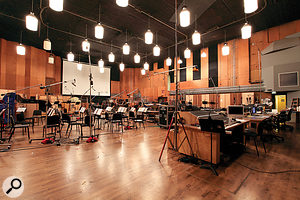 Along with Sony/MGM, the recording studio on the premises of Fox Studios is noteworthy as one of the few remaining large-scale scoring facilities in Los Angeles. Built in the 1920s as a filming stage, it was later converted into a recording studio when composer Alfred Newman was head of Twentieth Century Fox's music department. Since then, the studio has seen two substantial renovations. In 1997, the new, modernised control room was put into service, and Fox, honouring its founder, renamed the studio the Newman Scoring Stage. By contrast, the huge live room remains almost completely in its original condition. With a ground area of almost 700 square metres, it is among the largest dedicated recording spaces in the world, and — with its characteristic ceiling lights — one of the most attractive. 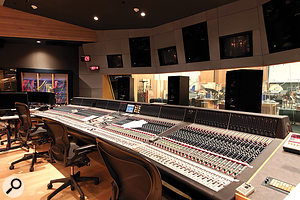 The centrepiece of the studio is an AMS-Neve 88RS console with 96 input channels, designed to be compatible with the desks at Sony/MGM and Abbey Road.Not only were Newman's film scores recorded at this studio, but also his famous Fox logo fanfare. Divas such as Marilyn Monroe, Julie Andrews and Shirley Jones have recorded at the stage, as did Elvis Presley. Famous film composer John Williams worked with Alfred Newman in his early career, so his name is inseparably linked to the studio as well. The list of scores that have been recorded at the studio in the past 70 years seems almost endless. In recent years, scores for The Simpsons, the Matrix trilogy, Sex And The City, Wall-E, The Devil Wears Prada and Pirates Of The Caribbean, amongst countless others, have been recorded at the Newman Stage. 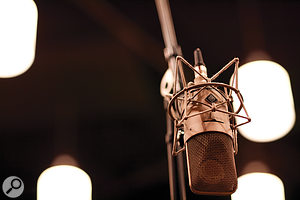 Left: a Neumann M149 in the live room, in front of the beautiful cylindrical ceiling lights. Right: one of two Sennheiser MKH800 mics capturing the sound of the grand piano.

Besides the live room and the spacious control room, the stage features two smaller recording areas: a dedicated drum room and a vocal booth. There are three desks in the live room, between the control-room window and the director's podium. One supports the headphone cue mixer, another one is for the editor, and the third desk is the work space of the copyist (it is not uncommon for last-minute edits to the score to be made during sessions, often by hand).

The centrepiece of the studio is an AMS-Neve 88RS console with 96 input channels. Its preamps have been modified following Abbey Road's specifications, and the layout of the desk is the same as that of the console at the Sony/MGM stage. Consequently, Newman is fully compatible with these other important studios. The primary recording system is Avid's Pro Tools, the inevitable industry standard, but a 72-channel IZ Radar system is used simultaneously as a backup solution.

State Of The Art 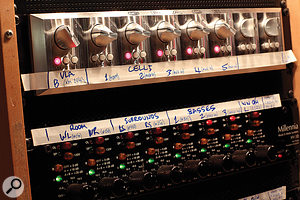 Left: 16 channels of transparent-sounding Grace and Millennia preamps in the outboard rack. Right: 48 Neve mic-preamp channels in the live room help to keep the microphone tie-lines as short as possible.

In contrast with Abbey Road's impressive vintage microphone collection, the Newman Stage is equipped with very modern sound transducers. Apart from a couple of vintage RCA ribbons, the studio predominantly makes use of current production microphones from manufacturers such as Neumann, Sennheiser, Royer, B&K and AKG, with the most numerous being the Neumann M150, TLM170 and KM184, Sennheiser's MKH800 and MKH40, and a number of Schoeps small-diaphragm condensers. 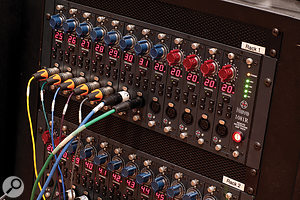 A very interesting feature is the rack of 48 Neve microphone preamps located directly in the live room: 24 standard 1081R and 24 'AIR Montserrat' types help keep the microphone tie-lines as short as possible. The latter were designed to the specifications of George Martin's legendary studio in the Carribbean, which was destroyed by hurricane Hugo in 1989. Outboard EQs and compressors do not play a vital role in a studio mostly used for orchestral recordings, but, nonetheless, some high-class gear is kept in the outboard racks, including transparent-sounding preamps by Grace, Millennia and Avalon, and a multi-channel SSL compressor, suitable for 5.1 bus processing. 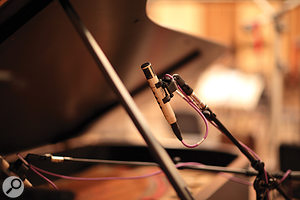 However, in a studio like this, it's not only the gear that counts. The lush, voluminous sound of the live room is probably the studio's biggest asset. For its size, it sounds surprisingly dry and controlled, but it lets sounds bloom in an absolutely beautiful manner. One might say this could be a perfect combination of the sonic attributes of Abbey Road's Studios 1 and 2...