We all have musical skeletons in our closets, but at least media composers don't have to wheel them out every night at Wembley Arena. 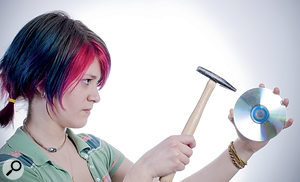 In June 1979, the American music industry magazine Billboard listed a song called 'Ready 'n Steady' by D.A. at number 106 in its Bubbling Under chart. The song rose to 102 a couple of weeks later, before disappearing altogether. And it didn't just disappear from the charts: it disappeared entirely from human record. No copies are known to exist anywhere, and even the most dedicated record collectors and pop historians have concluded that while it was almost certainly released, sold and performed across America — physical sales and radio plays being virtually impossible to fake on that scale — the record, its sleeve and the band or artist that created it have simply fallen off the face of the earth.

And who among us doesn't have at least a few pieces of work out there that we could wish a similar fate upon?

One of the biggest myths about this job is that we somehow have any real control over our careers. Like so many in this industry, the only tangible power we have is the ability to say 'No' to a particular gig, and even then, what we bring to the party can often be so pushed and pulled out of shape by the committees of the production process that occasionally we can feel like mere bystanders in the creation of a mutant. A mutant that carries our name and could potentially be heard by millions. And in situations like this, I don't know about you, but I always feel a bit like a male porn star who keeps his socks on. He turns up for work and delivers the goods, but you somehow get the feeling that his heart just isn't in it.

The chain of command in an expensive TV production (and they're all expensive) means that creative freedoms tend to be seen as a bit of a luxury item. And, to be fair, there are usually an awful lot of careers riding on the success or otherwise of even the humblest broadcast endeavour, so radical creative lurches in any particular direction are seen as incredibly risky to all concerned. This is why the most common complaint levelled by viewers at TV is that it plays too safe and is frequently derivative. In fact, it's a rare and wonderful skill to be able to take what often seems like insane, meaningless and contradictory criticism of your work, yet still pull something out of the hat to the satisfaction of the production team, the audience and, ultimately, yourself.

It Could Be Worse

But at least media composers get to move on. You want to know why rock stars are mostly insane? Because their audiences usually only want to hear what they created 30 years ago, and no-one buys the new stuff. At a Radiohead concert, the rule seems to be: anything from the first three albums — crowd goes bananas. Anything from the last few albums — crowd claps politely. So, while media composers all have things we aren't especially proud of in our back catalogue, we should rejoice in them and see them as steps along a never-ending road of creative self-improvement. If hearing something you did 10 years ago makes your cheeks tingle with embarrassment compared to what you can do today, take comfort in the thought that at least it isn't the other way round.