Unless you've worked in today's television business, you can't hope to understand the true meaning of job satisfaction. 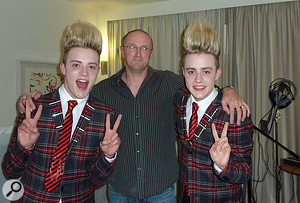 The happiest moment of my life — so far...

The only piece of real feedback I've ever got in relation to Notes From The Deadline arrived this week from America, and it accused me of devoting far too much space to bemoaning the dreadful time we all appear to be having in this industry. This came as something of a surprise to me, because I've always considered this one of the finest, noblest and most rewarding careers a musician can enjoy. To give you an example of just how ace it can be, I found myself recently in a minuscule hotel room in Edinburgh, awaiting the arrival of the infamous X-Factor/Big Brother contestants Jedward.

I had been commissioned to compose the theme song for their new BBC show, and obviously we would need to get together for them to record the vocals. The combined insanity of the schedule and deadline looming on the horizon meant that the only possibility for us all to meet up would be in a hotel near to where they were filming. I'd been told that we would have just 90 minutes during a filming break to record all the vocals, and that even this would have to include a 'planned interruption', which everyone was being strangely vague and non-committal about.

Fortunately, my mobile recording rig was whipped out of the bag, set up and ready to roll in no time at all. Based around a Macbook Air, external Thunderbolt hard drive with all my sound libraries, headphones, Korg Nano Mixer and MIDI keyboard, it is a tiny yet powerful studio in a briefcase. The scales in my bathroom (I was waiting quite a while and got bored) told me it all weighed an unbelievable three kilos. When Logic 8 was released a few years ago, it came with five install DVDs and a small library of manuals. The box it all came in was a typical example of Apple's trademark minimalist airtight origami, and, at a hefty five kilos, was a testament to the benefits of software downloading. In short, the vast majority of my entire recording studio now weighed less than the box its sequencing software came in.

Eventually the Jedward boys arrived and the vocal session got cracking. Suddenly there was a knock at the door and in burst Hacker T. Dog, the CBBC puppet (think Basil Brush for the Sunny Delight generation), who arrived, along with a full camera crew and several producers and sound recordists, to film a promo with the boys. Including Jedward, there were now 16 people working in my tiny hotel room/improvised recording studio. The director of their TV show and I were forced into the adjoining toilet, and had to observe the goings-on through the towel rail. Perhaps, like many producers unaware of their artists' abilities, I approached the project with mild trepidation, but I was genuinely surprised that the reason I experienced mixed feelings about having included so much fancy-pants syncopated three-part harmony in the vocal arrangement was not, in the end, because of my singers' talents, but because of the session-derailing appearance of a hyperactive TV presenter with his hand stuffed up the arse of a life-sized terrier from Wigan with movable eyebrows.

And as I stood in the bath staring out, open-mouthed, at the showbiz mayhem unfolding in front of me, I distinctly remember thinking "I bloody love my job.”