No‑one makes demos any more — it's just that any music we make is treated like a demo. 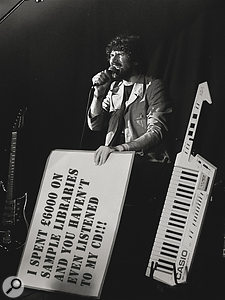 "What do we want?” "The right to put across our musical ideas using a cheap and inexpensive medium!”"When do we want it?”"Well, the executive producer will be back from lunch at four, it'd be great if we could have something on his desk...”

The word 'demo' has numerous meanings. As shorthand for 'demonstration', it can be used to describe acts of protest, like the recent waves of civil unrest and the overthrowing of despotic regimes around the world. In Greek mythology, Demo was the name of a princess who was taken from her sadness in mourning her dead father and magically transformed into a beautiful dove. Unfortunately, there isn't much mythical beauty to be found in the understanding of the word that will be familiar to most musicians. In fact, for the media composer, the word 'demo' has lost all meaning.

The Client Is Always Wrong

In the old days, a demo would be a rough rendering of an idea, put together cheaply, which would then be recorded professionally if it met with approval. These days, no‑one would ever dream of seeking artistic sign‑off from a telly person with anything other than a completely finished, broadcast‑quality master recording. But why? Do we not trust our clients to be able to discern the best direction for the music based on its artistic merits alone? Do we not assume that they will be able to tell the difference between a crap sampled string line and a real string section? No, we do not. And that's why we are all so miserable.

There's really no reason why we can't all ply our trade by standing in front of our clients with a guitar and a kazoo and offering them a range of tunes that will all be 'better once we record them properly' — but none of us do, because you know that if the other guy in line for the job does it a bit quicker and slicker, he'll get the gig, and you'll be just another busker with a laminated BBC visitor's pass. So inter‑composer one‑upmanship prevails, and in this production arms race, the one who can get the most expensive‑sounding track together in the shortest amount of time usually wins. We are like carpet salesmen who, instead of carrying round small 10cm-square samples of different‑coloured bits of woollen fluff, carpet the client's entire house 16 times and hide in the corner, hoping there might be at least one of the colours they perhaps hate a little bit less than the others.

Perversely, a media composer should also expect to be ready to have to make radical changes to any and all parts of his or her work until a few hours before the show is broadcast (and, as has once happened to me, actually during the live show) — and, of course, programme‑makers reserve the right to change their minds about having you as their composer at any time, as well. So not only is there no such thing as a demo any more, but until the cheque has cleared in your account, technically everything is a demo.

Perhaps it's time for our clients to expect a bit less blind speculation from us, and allow us instead, like the dear Princess Demo, to turn a few of our sad old ideas into beautiful white doves for viewers' delight and entertainment. The only way we can achieve this is if we all get together and show unity and support for each other. Let's end the arms race, let's take to the streets and show how angry, yet sensitive we all are. Let's have a demo. No, hang on…