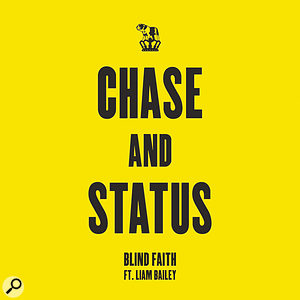 There are lots of points of interest here, not least the way distortion allows the lead vocals to maintain some presence in the face of the backing track's full‑frequency assault — a long‑standing trick in heavy rock music, which is equally applicable to slab‑like saturated synth textures like this. I also love the way the arrangement is constantly evolving through time. Take the first verse (0:27‑0:55) for instance. It starts by dropping the drums with a low‑end 'boom' one‑shot and a sizzly HF transition effect. The first vocal phrase follows shortly after, by the end of which the backing has already thinned out and become more muted, to give the sonic details of the voice, high synth riff, and their delay effects a few moments in the spotlight. By the time the second vocal phrase has finished, though, the synth bed is already becoming edgier and more filter‑modulated, leading towards the vocal delay spin on the word 'I' at 0:40.

Then the tambourine/shaker subtly increase the rhythmic drive and a hint of low bass appears as the synths begin to fade in and open their filters. At 0:48, a siren sound emerges from somewhere below 200Hz and slowly slides upwards to connect with the strong 658Hz fundamental of the vocal 'Ho!' at 0:53, while the shadowy low end fades out again in preparation for the main chorus bass part. It's this kind of continual ebb and flow that seems to typify a lot of the most commercially successful dance music, and Chase & Status exemplify a wide variety of techniques here which you can readily adapt to enhance your own electronica tracks. 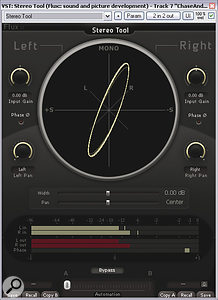 Here's what the sub‑80Hz frequency region of Chase & Status's 'Blind Faith' looks like on a vectorscope display. The oval shape shows that there are out‑of‑phase bass components in the mix, something that can cause problems in real‑world playback situations. The second vectorscope shows the much better‑behaved sub‑80Hz region of Pendulum's 'Watercolour', which delivers a much more consistent bass sound. 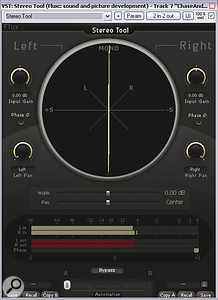 The drums and bass are worthy of attention too. The snare has a good chunk of low end to it (another connection with classic rock records), specifically a strong pitched component at 172Hz. Try notching out that frequency with EQ and you'll quickly realise how significantly it affects the drum's subjective power. By giving more low end to the snare like this, it doesn't need to fight as much with the synths and vocals in the 3‑5kHz presence region, which helps avoid harshness creeping into the overall mix tonality. It's also worth noting that 172Hz is an 'F', a note which works pretty well with all the main chords of the song: a 7th of G-Major, the third of D-minor, and the root of F-major. By virtue of this, the 172Hz component sinks into the track, contributing power without drawing too much attention to its pitched nature.

The kick rolls off pretty rapidly below 60Hz, as you can hear easily at 0:13, leaving a clear window for the 35‑50Hz bass‑line fundamentals. Despite this, the low end of this record is not as solid and powerful as it could be, for two reasons. The first is that the levels of the bass fundamentals are quite inconsistent. Compare the 'D' notes at 0:57 and 1:04, for example. The fundamental of the latter is considerably stronger (to the tune of about 6dB, judging by my spectrum analysers). Compressing the low frequencies is no remedy, though, because of another problem: the left and right LF channels aren't well matched, either in terms of level or phase. In other words, in a stereo speaker system, the combined bass output of the speakers will suffer because one of the woofers is usually producing less fundamental than the other; while on a mono system, partial phase‑cancellation adds further variability in the combined bass level.

You can easily identify low‑end phase mismatch by sending a steeply low‑pass‑filtered version of the mix to a stereo vectorscope. In 'Blind Faith' you get an oval trace, whereas a production that's better behaved in this regard (Pendulum's 'Watercolour', say) exhibits something close to a straight vertical line with a filter cutoff of 80Hz or so. To hear what I'm talking about, listen to the 'F' bass note at 3:09. It starts off with the channels partially out of phase, then drifts into phase towards the middle of the note's duration, before sliding back out of alignment again. The result in mono is a noticeable low‑end swell (maybe 3dB) towards the middle of the note, and this is the kind of instability that's present right through the track. 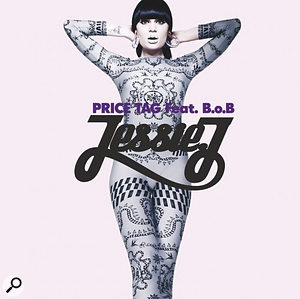 One of the mix engineers I keep quite a close eye on is Serban Ghenea, and (as usual) several of his mixes have been bothering the charts recently. This is my favourite of the current crop, which is a masterclass in mixing for the mass market — by which I mean for cheap playback systems and low volumes. Even on small speakers it manages to retain a feeling of warmth to the low end, yet keeps the vocal clear and cutting, and offers real bite in the drum department. This is partly by virtue of the arrangement, of course, which might be why other more full‑textured recent mixes from the same guy (such as Kesha's 'We R Who We R' or Pink's 'Perfect') feel less focused and powerful to my ears — and seem almost slightly ragged by comparison. It's the old adage: the less you put into the production, the bigger each element sounds.

There's more to it than that, though. Notice the tight leash on the extreme lows, for instance, which means that the balance of both bass and kick survives the switch from full‑range monitors to small, single‑driver speakers remarkably well. The highs, on the other hand are extended and fairly full‑on, to keep things shiny‑sounding even if your boombox is sitting behind the sofa. There's also a small but significant peak in the vocal response around 4.5kHz (a hallmark of many Serban Ghenea mixes), ensuring that Jessie's persona dominates the frequency region where human hearing is at its most sensitive, and which low‑spec playback systems are therefore usually best suited to reproducing. Mono compatibility is excellent too, even though there's a useful amount of spread in the stereo mix on account of widening effects (you can clearly hear such a vocal treatment in the stereo Sides signal during the verses and rap, for instance) and a few wider‑panned, but musically inessential, synth and backing‑vocal layers.

However, although this mix may well end up next to Gabrielle's 'Independence Day' on my own reference CD, I'll probably use just a section from early on in the track, because by the final choruses there are so many of those 4.5kHz‑rich vocal layers blended together that the whole thing starts to get overly fatiguing for me, in a way that restricts how much I can comfortably turn up the playback volume.

Speaking of the vocals, there are a couple of specific things worth mentioning. Part of the reason why the backing track can be so full‑sounding (for a radio single, at least) is that the vocals are pretty shy on low mid-range — Jessie's melody and lyrics can remain clearly intelligible via their higher frequencies without taking up too much space in the mix and making the bass/drums sound small. Also, if you listen to the vocal's chorusing effect in the stereo Sides signal, you'll notice that it sounds like it's lisping. While this could be a side‑effect of the specific processor, I suspect that the effect send has actually been de‑essed to reduce emphasis on the lead vocal's sibilants — a significant concern with any vocal like this that's so strong in the 3‑6kHz region. Mike Senior 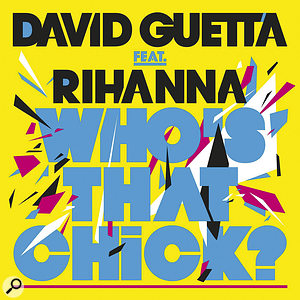 The thing that really struck me about this track is the satisfying way the various vocal melodies and bass/synth riffs bounce off each other rhythmically, and how they both interact with the regular kick‑drum pattern. Looking into this more closely, the one thing that I noticed particularly was how David Guetta has used repeated 3/16‑note and 3/8‑note groupings. It's a common dance‑music trick to use these time values for stereo delay special effects, as the repeats remain more audible by virtue of avoiding the masking effects of the main drum beats, even though they still lock in with the overall groove. However, these time values can also be used to construct simple repetitive (and therefore easily memorable) melodies/riffs which nonetheless create interesting syncopations against the main beat.

You can hear the 3/16‑note pattern as soon as the vocal comes in, starting in sync with the kick drum, and then free‑wheeling until a surreptitious 2/16‑note duration brings it back into sync with the downbeat two bars later. A miniature version of the same idea forms the first two beats of every bar of the main bass/synth riff from 0:19, at which point the vocal line simultaneously takes up another two‑bar 3/8‑note‑based pattern. You can also hear the ghost of this 3/8‑note idea in the vocal link to the chorus at 1:36, and in the kick‑drum pattern of the middle section at 1:53 (where the vocal line briefly assumes the four‑square rhythmic role normally taken by the kick).

While this use of rhythmic patterns is interesting in its own right, what I like about what David Guetta has done here is that he's carefully chosen the moments for syncopation so that it supports the music. For example, I love the way that all the rhythmic complexity in the backing suddenly vanishes during the last two beats of every two‑bar cycle in the pre‑choruses (0:19 and 1:23), which gives a real lift into each section boundary, and also the way the main 'who's that chick' hook‑line suddenly returns to a simple eighth‑note pattern, which always somehow manages to take me a bit by surprise every time. Mike Senior