Life as a jobbing musician has always been tough, but at least the risk of drowning isn't quite as high these days.

One of the most enduring parts of the whole Titanic story is the image of the small band of musicians who stood on the deck and resolutely played string quartets and hymns to try and calm the terrified passengers until the very end, when the ship disappeared into the icy waters beneath them. One survivor later noted: "Many brave things were done that night, but none were more brave than those done by men playing minute after minute as the ship settled quietly lower and lower in the sea.”

What is not quite as well remembered is the fact that less than two weeks after the ship sank, the families of the musicians were sent bills by the White Star Line demanding payment for the loss of the company uniforms that the men were wearing as they sank to the bottom of the ocean. The ship's owners had just lost an investment costing (adjusted for inflation) 400 million dollars, and while the bodies of its passengers and employees were still being dragged from the frozen North Atlantic, they set about trying to claw back some of that loss by charging a dead violinist five shillings and four pence for his trousers and jacket. Talk about a tough gig.

But if today's online music streaming services ran shipping companies, would their attitude towards musicians be very different? Pete Waterman famously reported that he earned £11 from 154 million YouTube hits of Rick Astley's 'Never Gonna Give You Up', 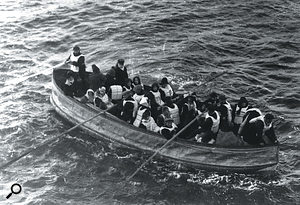 "I understand about wanting to save the women and children first, but 'accordion players last' is a new one on me.”and we almost have to adjust our parameters of language in order to appreciate the dust-like micro-pennies we can expect to 'earn' when thinking about making our music available online. Radiohead's Thom Yorke recently pulled his music from Spotify on the grounds that "new artists get paid fuck all”.

Meanwhile, media composers' clients are demanding more and more from us in terms of the rights they want us to assign as part of the deal. Our production budgets are shrinking, and it can be a terrifyingly lonely and arbitrary business. Musicians have it tough, and often we only have ourselves to blame. There are too many of us willing to allow ourselves to be badly treated, so the market does just that.

I'm not suggesting that any of us regularly have to provide a live soundtrack to our own death aboard the sinking of a 46,000-tonne ship on its journey to the ocean floor 12,500 feet below. But some days, it feels that way.

The leader of the Titanic's small orchestra that night was a young hero called Wallace Hartley. In the moments before he slid beneath the waves, he somehow managed to stuff his violin into its case and strap it onto his back. Perhaps this provided extra buoyancy which kept him afloat just a bit longer, because, unlike his other band members, Wallace's body was, in fact, recovered from the sea. It was brought home to Lancashire, and in a fitting tribute, nearly 40,000 people lined the route of his funeral.

Miraculously, his violin survived and was recently auctioned for £900,000.