No‑one likes having their work criticised, especially when the criticism is baffling, surreal and second‑hand. But that's the lot of today's composer for the media. 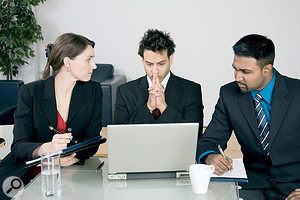 Picasso once observed that, as adults, we constantly correct children's patterns of speech as they grow. As a result, they typically master the incredible complexity and infinite subtleties of language at a very young age. He contrasted this with our usual response when a child draws or paints a picture — which often extends no further than 'That's lovely, dear.' He suggested that this was the reason we weren't all great artists and why the world isn't full of amazing works of art.

Criticism is never welcome, but it is nonetheless an integral part of the jobbing composer's life — and while music creation might be a relatively specialist field, comment and opinion is anything but.

As TV becomes more reactionary, more expensive, more ratings‑driven and generally sillier, it seems that the people making the shows are being increasingly robbed of any real artistic input. Instead, they are answerable to the mythical 'execs', who have final approval on every tiny detail of the show and yet are completely insulated from any direct contact with you. The effect on the music — given that you are working to please the person above the person giving you the feedback — is that when guidance eventually filters down to you it can be terrifyingly vague, contradictory, and often simply hilarious.

Here is a completely, 100 percent true selection of some of the feedback I have received from various TV producers in the past six months:

"Can you make it a bit more R&B, like Franz Ferdinand?”

"It needs a good dollop of Gary Barlow with a squirt of Bono.”

"It needs to be really contemporary — just like Michael Jackson.”

"We all love it but the Executive Producer is really into the Proclaimers...”

"Can you make it more orange‑sounding?”

Add to this circus the regular crushing sense of self‑doubt most composers feel daily, and you have all the ingredients for a creative pie‑fight where it's the blindfolded leading the blindly panicking into a valley of the bland. And your only real consolation is that at some point the production is simply going to run out of time and you'll stop having to revisit the same theme tune 56 times. And sometimes it's not even that much fun. Sometimes you have to do all of that as part of the audition process, just to get the gig.

It Could Actually Be Worse

It comes as no surprise that art is usually the ginger kid in the corner of the playground being intimidated by the school bully of commerce, so it's worth remembering that your greatest weapons are the noble arts of patience, consistency and determination. It's also worth remembering that just as you are getting it in the neck, the people giving you grief are almost certainly getting 10 times worse from the person above them, who is probably asking if the presenter's tie could be a bit 'quieter'.

Albert Einstein never considered himself to have any special talent and attributed all his success to "curiosity, obsession and dogged endurance combined with self‑criticism” which in musical terms probably just means that the person who can put up with the most outrageous, misguided flannel for the longest time wins the syndicated prime-time costume drama series.