Credits can be a vital resource to the media composer, but they can also be a ball and chain.

In 2012, the Nobel Committee awarded its highest honour to the entire European Union in recognition of its contribution to the advancement of peace, democracy and human rights. Which means that not only can I claim credit for the same number of Tour de France victories as Lance Armstrong and the same number of Academy Awards as Alfred Hitchcock, George Gershwin and Leonardo DiCaprio combined, but I also have the same number of Grammys as Björk and Tupac and I am the proud (although admittedly joint) recipient of a Nobel Peace Prize. 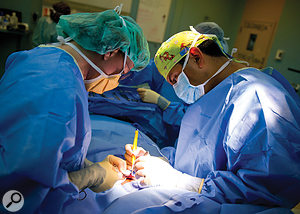 “I always tattoo my name next to the scar. I get a lot of repeat business that way.”The concept of credit is a funny thing. When you buy a hamburger, it doesn’t come with a list on the side of the box naming all the people (and creatures) who contributed to the finished product. Your car doesn’t have a little plaque on the back telling you the names of everyone who helped to design and build it. Yet in the world of media and show business, credit is one of our most vital commodities. At the very start of your career, an on–screen credit marks your all–important entrance to the party. It announces that you play at a certain level and, of course, for future work, allows potential clients to assess what kind of work you’ve done in the past. The dark side of credit is that it also represents a potent negotiating carrot for getting competitive deals from people. Do you think sausage makers might be able to reduce labour costs if all meat industry staff had the option of an on–package name check?

The global financial credit crunch was caused largely by not heeding the familiar warning that should probably also be applied to on–screen credit, namely that “past performance is not an indicator of future success”. Established composers, like everyone else whose job titles are listed on screen, always run the risk of being creatively associated only with the types of show they have been credited for. If you are lucky enough to be part of a project that gets noticed, that risk becomes a near–certainty. We are all guilty of pigeonholing each other in all walks of life, and producers looking for the best composer for a project (or, to put it more accurately, the composer least likely to muck it all up) are no exception.

The most useful way to view TV and film projects is like betting on football teams. People stump up large amounts of money in order to make them happen, and the longer (and more project–appropriate) your list of credits, the more likely you are to get picked for the team. You might think you’d be really good at scoring a dark, twisted serial killer drama. But perhaps you’ll never know, because no–one has ever asked you to score one. And why don’t they ever ask you? Because no–one has asked you yet. Clever, isn’t it?

These days, end credits seem to be a diminishing return, often reduced to a small scrolling box in the corner of the screen which can only be read by those watching in high definition and not distracted by the trailer for the next scheduled show taking up 90 percent of the rest of the viewable area. Perhaps this is a good thing. As someone with an apparently exotic and untypeable surname, which is beamed to the nation incorrectly spelt on at least one project each year, I say roll on the day when we no longer seek public glory for our work and instead focus solely on getting paid properly. As someone cleverer than me once remarked, “Graffiti scrawled anonymously on a toilet wall exists for neither creative praise nor financial reward and as such is the highest form of art there is.”