The viewing public never get to see — or hear — the messy side of TV production. But that's where the fun is. 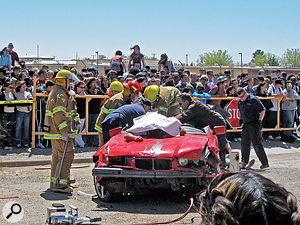 "Mind if we try one more take? I just want to see if it stacks better with a different preamp.”

Anyone who thinks that TV is a glamorous business has obviously never been inside the Top Gear production office. It's basically three large portable cabins of the kind you might find on a building site, wheeled into position by the side of a race-track, gaffer-taped together, covered in mud and filled with dead coffee cups, scraps of paper, exhaust pipes, camera equipment and fluorescent safety jackets (largely unused). In a corner of one of the rooms, I have set up a tiny, improvised recording system based around my MacBook Air and a Korg Nano keyboard. My entire studio is balancing precariously on a desk that has two missing legs, the majority of its support coming from an upturned engine block with a damp phonebook on top.

A Bad Time To Crash

Joining me in my embarrassingly under-specified, scruffy shithole is former Guns n' Roses guitarist Slash, who, after screaming round the racetrack in the Reasonably Priced Car, is due to perform a version of the Top Gear theme music I've produced whilst balancing 30 feet above the audience on the back of a destroyed Toyota Hilux tilted at 45 degrees. What could possibly go wrong?

Slash asks for a bit more drums, but I'm struggling to adjust the overall sound of the mix to make sure there'll still be enough room for his live lead guitar part, because there are a few other environmental issues to deal with. It appears that a Ferrari 456 is having its engine revved to destruction immediately outside my window, producers with clipboards are rushing all over the place, doors are slamming, a helicopter is landing nearby and it's so cold I can't feel my toes any more.

About 350 million people around the world watch Top Gear each week and we've got less than 15 minutes to finish the track, get it mixed and over to the sound department on a USB stick before the cameras roll. A perfect time, then, you might think, to see OS X's Multi-coloured Spinning Beach Ball of Death hover ominously over Logic's Arrange page. A perfect moment to wonder if I've been saving the song file as often as I normally would if I didn't have to worry about the smell of petrol wafting dangerously in from outside. A perfect time to consider just how much of a total fucking plum I'd feel turning to the man voted the World's Greatest Living Guitarist™ and saying "Oh look! My computer's done a boo-boo!”

These are the moments that make you realise that the glamour actually comes from the times of crisis. The most exciting aspect of this job is the last-minute panic and theatrical scramble to get everything to the stage on time and make it all seem effortless. To see the professionalism and creativity of a well-oiled production team in action is nothing short of awesome. And a crashed laptop is hardly likely to faze a man who, after years of hard living, was once given six days to live by his doctors.