The pace of change in music technology can be scary, so let’s be thankful for the one constant.

I once met a lady who survived having a nuclear bomb drop on her. She was a girl of seven when, on 6th August 1945, the US detonated a 15 kiloton atomic device above her home town of Hiroshima, Japan, instantly vapourising approximately 80,000 people. I was lucky enough to spend an afternoon in her company at the mayor’s office in the centre of the rebuilt Hiroshima more than half a century later, and despite the obviously bleak history between our two nations (my great–uncle died in a Japanese prisoner–of–war camp) we got on very well. She even made me a garland of a hundred origami paper cranes on a string as a token of international peace and friendship. 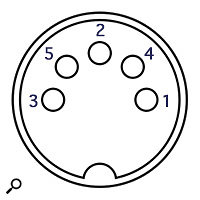 The MIDI protocol revolutionised electronic music-making. However, it made for a rubbish 'join the dots' puzzle.

It turns out that sometimes it really is possible for the distance between two rivals to be bridged by a humble cord. From the latest SSL mega–bucks studio console to a cheap iPad keyboard controller, from a top–of–the–range Korg synth to a basic audio interface, you’ll find only one true constant. These devices are wildly different in size, shape and operating system — but round the back, in amongst the sea of soon–to–be outdated ‘industry standard’ sockets for USB, Ethernet, Thunderbolt and Firewire, you’ll always find an old friend.

The Musical Instrument Digital Interface protocol was unveiled at the NAMM show in 1983 by Ikutaro Kakehashi, founder of Roland Corporation, and Dave Smith, president of Sequential Circuits. The first the world saw of it was a Jupiter 6 and a Prophet 600 making music together. The impact this event had on the industry and those who were there to see it is hard to imagine. Two men whose fathers were almost certainly bitter enemies in war had joined forces to make two musical instruments talk to each other. The metaphor alone brings a lump to the throat. And yet, somehow, 31 years later, MIDI is still on version 1.0. It was Open Source decades before software would adopt the term, and when set against the landscape of obsolescence in pro audio, where we fully expect new gear to be irrelevant and unusable in five years’ time, MIDI’s three decades of unwaveringly faithful service looks all the more astonishing.

Of course, it has its limitations. Purists are frustrated by its 128 degrees of velocity, and the absence of per–note pitch–bending, while the amount of data that it can transmit (and the speed of that transmission) seems laughable in a world where we all expect wireless gigabit magic everywhere we go. But in its defence — unlike USB, where it will always take three attempts to put the plug in the right way up — MIDI is basically idiot–proof. The cables are non–proprietary, cheap as chips and available everywhere (£35 for a Thunderbolt cable? I’m looking at you, Apple...) and unlike Thunderbolt you can’t accidentally damage a DIN connector by pushing the plug all the way into the socket upside–down.

Video game soundtracks, software sequencers and digital audio workstations, phone ringtones, synth modules, karaoke, home studios — none of these things could have come about in quite the same way, had not an American and a Japanese man realised a vision of different synthesizers being able to communicate, based on shared interests and values. Korg, Oberheim and Yamaha too put aside petty rivalries to work together for a common cause. In 2013 Kakehashi and Smith were awarded a Technical Grammy Award for their work on MIDI’s development. The Eurythmics’ Dave Stewart paid tribute to these two remarkable men at the time, saying that they “gave birth to a revolution that will never end”. Here’s hoping.