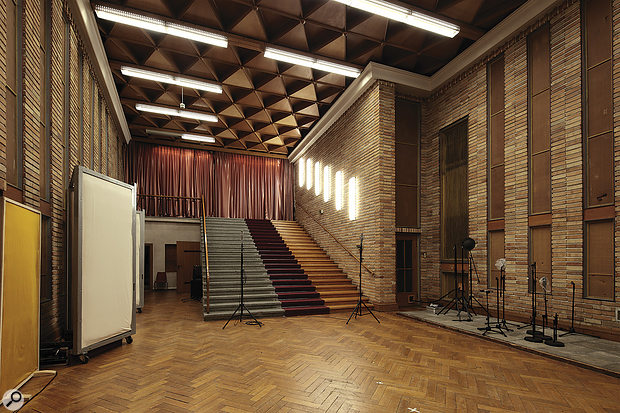 Stairway to nowhere: the main feature of the Stairway Room is a staircase designed for Foley purposes, rather than to reach a destination! 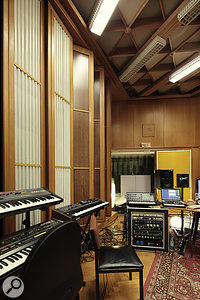 This live area surprises with a rather unique feature: the walls are covered entirely with triangular columns which can be rotated around their vertical axis. Each side of the columns is equipped with a different surface, so that a variety of reflection, diffusion and absorption characteristics can be achieved easily by flipping them.In today’s digital world, there is an abundant supply of samples, and gigabytes of sound effects are just a mouse–click away. But half a century ago times were different, and whenever a radio play or a feature film required a sound effect, it had to be recorded specially for this very purpose. And the Berlin studio that is today called Funkhaus (‘broadcast house’) owes its origins to the need for tailor–made effects in audio and visual drama.

In the first years after World War II, the broadcast stations of both German states were operating from the same headquarters in West Berlin. But soon enough, with the Cold War on the horizon, this wasn’t considered feasible any more. In the 1950s, the East German TV and radio networks were moved to their new home in the borough of Oberschöneweide, located a few kilometres away from Alexanderplatz, outside the centre of the city, and near the river Spree. Here a ‘city within the city’ of more than 30 acres was conceived. This would become the nerve centre of the entire East German broadcast network until 1989, employing over 5000 people, supplied by their own shops and even their own hospital. At the heart of this site were four huge brick blocks, designed by the former Bauhaus architect Franz Ehrlich and constructed between 1951 and 1956. 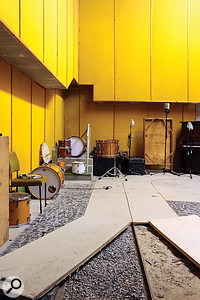 The Foley room has a dry, warm and punchy sound which is ideal for drum recording. Beneath the wooden panels are walkways filled with gravel and sand, made to record the sound of people walking around outside.After the fall of the Berlin Wall the entire site was abandoned,and subsequently it went through the hands of a few rather dubious real–estate speculators. But since 2006 the current owners, an international investment firm, are aiming to re-establish the entire lot as a media production facility, in an industrial area away from the centre of the current Berlin hype. The musical heart of the complex beats in Block B, a 15,000–square–metre building which is possibly the largest purpose–built recording studio in the world. It comprises no fewer than eight ‘inner houses’, each standing on its own foundations for acoustic isolation, but sharing the same outer shell. Block B is home to the enormous Gro er Saal (‘great broadcast hall’); at over 900 square metres, it’s one of the largest recording venues in the world, and even the much smaller Saal 2, with a floor area of around 400 square metres, is similar in size to Abbey Road Studio One. But Block B also encompasses Saal 3 and 4, as well as a few smaller rooms and two studios dedicated to the production of radio plays.

One of these, the former Hörspielstudio (‘radio play studio’) H1 was renamed Planet Roc, and under this name it attracted both a local and international crowd to its rooms replete with GDR patina. Artists including Sting, Joe Jackson, the Black Eyed Peas, A–ha and Phoenix were among those who followed the call of this rather unique recording environment. After Planet Roc ceased operation a few years ago, the studio was taken over by producer/engineer Yensin Jahn, who had previously been involved in many Planet Roc productions as a recording engineer. He teamed up with partner Philipp Dusse and they renamed the studio Funkhaus, nodding towards the long history of the place. Recent notable clients include jazz trumpeter Till Brönner, Emigrate/Rammstein, Apparat and Dear Reader. 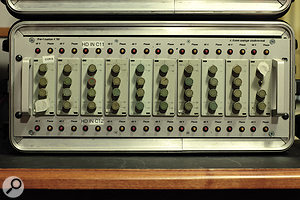 A rack of East German RFZ V781 dual–channel amplifier modules.Funkhaus’s clients and engineers have a very special recording environment at their fingertips. Each of the five live rooms was built to different specifications and for different purposes, but all with the same goal in mind. With unusual variable acoustic properties, the spaces are equally suitable for band and overdub recording as well as sound effects. 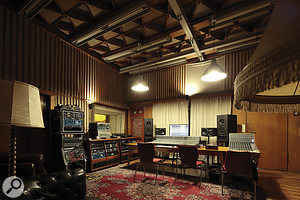 The main Funkhaus control room.At the heart of Funkhaus is the large ‘Stairway Room’ (see photo above), which boasts a huge 185–square–metre floor space — and a huge stairway which leads nowhere but a small storage space! With its three different surfaces (wood, stone, carpet), the sole purpose of this staircase was for recording the sound of people walking on, well, a staircase. There is a cross–shaped vault beneath the stairs, which is often employed as an echo chamber, and the room has further interesting features such as the built–in telephone booth, which, again, was conceived only to record the sound of people talking in a phone booth. 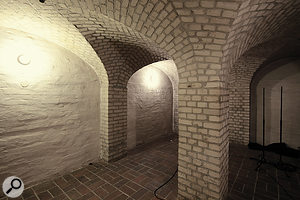 The cellar vault beneath the stairs in the large live room is often employed as a natural echo chamber.In contrast to this rather live–sounding room, Funkhaus also offers a Foley stage tuned to a free–field response. With its rather dry, warm and punchy sound, this room proves ideal for drum recordings in a tight ’70s fashion. The wooden floor panels can be removed to reveal two walkways filled with gravel and sand, installed for capturing the sound of people walking around outside. In addition, Funkhaus also offers a rather small wooden booth often used for vocal recordings (and called ‘the sauna’) as well as a unique multi–purpose room. The walls of this last space are fully coveredwith triangular columns which can be rotated around their vertical axis. Each of their three sides has a different surface with varying absorbtion, reflection and diffusion characteristics, and by adjusting them, the reverb time of the room can be varied between 1.1 and 2.4 seconds! 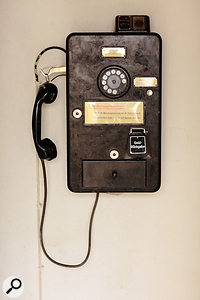 The telephone booth in the large live room, installed solely for recording phone calls!With these different recording spaces at hand it is no surprise that recording gigs is an essential part of the daily Funkhaus business, in addition to mixing, productionand even film work. [Watch our July 2015 video tour for details] And the central control room is equipped accordingly, being centred around a Pro Tools system with a D–Command console and a 10–channel Neve 5106 sidecar. The outboard setup is notable for a particularly impressive selection of preamps including no fewer than 12 channels of API 3124, 16 channels of Neve 4081 and 26 channels of RFZ V781 modules. These discrete, transformer–balanced preamplifiers, designed by the Rundfunkzentralamt (central broadcast agency) can be seen as East German counterparts to the more common West German modules of the V676 family, made by Siemens/Telefunken.

The mic locker is equally well equipped: among many others, Funkhaus owns no fewer than five Neumann Gefell UM57 mics, which often are deemed the East German version of the legendary U47.