What I really love about this song is the way it turns a couple of mix clichés on their heads. There are two things that most chart tunes do when they hit the chorus: first, they increase the density of the arrangement in some way, whether by introducing massed guitar overdubs, backing vocals, trance pads, or whatever; and second, they generally bring the delay and reverb levels up a bit in the mix to make everything seem bigger and more powerful. Here, however, the pre-chorus (first heard at 0:31) is quite dense, especially in the high-frequency region, with multitracked backing vocals and brass layers, stuttering claps, and plenty of splashy reverb, but all that is kicked out for the chorus (0:40), where the clutter suddenly clears out and everything suddenly gets much drier and more up-front. This is dynamite from a pop perspective, because a simpler arrangement will always appear louder over the dynamics-restricted playback formats of the mass market, and it also means that the sax and vocal hooks are much more audible (and therefore hookier) than they might otherwise be. 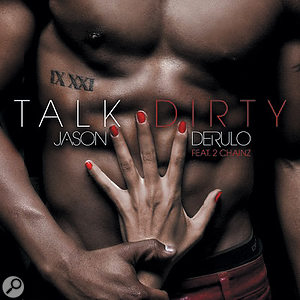 The danger with this approach is that a stripped-back chorus can feel like a let-down if you’re not careful, but I think this is avoided very successfully here. The main trick the producers have pulled is dropping the bass out of the mix for the pre-chorus — not only the one-note bass line, but also the low end of the kick drum (by virtue of choosing a different sample, I imagine). The “oo-ooh” backing-vocal line has a crucial role to play too, maintaining a maximum-width stereo panorama, contributing an airy gloss to the top octave of the frequency spectrum, and giving the section as a whole a full/warm-sounding character despite the decimated arrangement line-up.

The change in rhythmic groove is relevant as well, I think. By omitting the strong kick beats from the pre-choruses and using so many eighth and 16th notes in the clap part, the groove at that point gets a bit stuck in the mud. When the chorus hits, however, the rhythm suddenly skips along, almost as though there’s a slight tempo increase, which there isn’t in reality — I checked! Incidentally, another good recent example of this can be heard in Eminem’s ‘Monster’ (see below), where the increasingly frenetic rhythmic mutes at the ends of each verse give way to the more straight-ahead groove of guest vocalist Rihanna’s choruses. Mike Senior 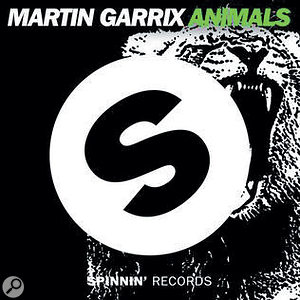 If you dig the ‘stripped-back chorus/hook’ idea in this month’s Jason Derulo critique, then there’s another masterclass for you in Martin Garrix’s ‘Animals’ when the main bass kicks in at 0:47. Preceded by massive euphoric trance pads, clouds of stadium reverb, and double-speed snares, everything suddenly evaporates following the electro-beast “animals” phrase, leaving just the duo of four-to-the-floor kick/bass and synth lead. Again, the introduction of real low-frequency power is a key factor in the section’s success, but it works just as well on small playback systems too, given the amount of distortion contained within that bass/kick combination. However, the lead line’s heavy ‘small stone room’ reverb is also fabulous, providing all the width, sustain, and HF density you’d want, despite the inherently spiky nature of the synth sound itself. And because that reverb is much smaller and more contained, the sound feels more up-front into the bargain.

But that’s not all that attracted me to this production. Garrix makes extensive use of slowly evolving sounds as transition effects, which adds a great deal of forward drive to his arrangement, in my view — by my count he’s averaging about one every three seconds within the first half-minute. While some of them seem to be simply the work of slow-attack amplitude envelopes, other instances appear more complex, such as the short punctuating swell at 0:14 or the sucked-out snare at 0:54. I’d hazard a guess that real-time filter and effects modulation are probably part of the recipe in those spots, but I’ve also heard similar effects from extreme time-stretch processing and from layering together reverse-envelope transition-effect samples with different onset curves, so those would be other things to try if you want to emulate this kind of technique for yourself. Mike Senior 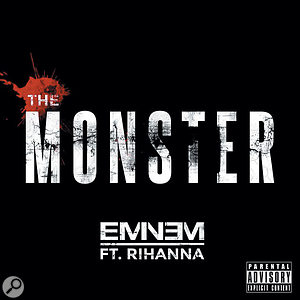 What struck me most about this track was its use of extreme arrangement breakdowns. Although you might dismiss some of these as the cheap ‘hit some mute buttons to keep Grandma awake’ tactics that have long been the stock in trade of chart hip-hop producers, I think it’s actually a bit more intriguing than that. For example, the use of a low-pass filter instead of a mute is quite effective for “it was confusing” at 0:32, hinting at woozy disorientation in much the same way as Tinie Tempah’s ‘Pass Out’. The way the series of mutes at 0:48 locks into the rhythm of “one sheep, two sheep” is also great, and the other series of mutes at 1:55 seems well-placed too, given the psychotic nature of the line “my OCD’s conking me in the head — keep knocking, nobody’s home” that they accompany.

The start of the second verse (1:27) holds another nice surprise: a very unusual vocal texture, where Eminem’s rapping seems to be accompanied by a mildly electronic choir following exactly the same rhythms as he is. I suspect that this might be the work of Melodyne (or some such software), which has created the harmonies from transposed and ‘robotised’ copies of the lead line — especially given that the subsequent Dalek impersonation (1:37-1:41) tells us that serious pitch-shifting technology was definitely employed on this project. The cool effect is marred slightly, though, by the massive low-frequency plosive blast on “poet” at 1:28. Did someone forget to high-pass filter the shifted BVs? Mike Senior

This song has burrowed so deeply into the common consciousness during the last half century that it can be tricky to listen to it with fresh ears. Despite this, however, it remains one of my favourite pop songs, concealing numerous musical subtleties beneath the superficial simplicity of its rhyme scheme, instrumentation, and guitar figurations. Foremost amongst these is the seven-bar phrase that constitutes the verse (first heard with the lyrics “Yesterday... believe in yesterday” at 0:05-0:22), and which, frankly, continues to baffle me! Given the preponderence of four- and eight-bar structures in most pop music, how the hell has McCartney made this sound so natural? If you’ve ever tried writing a seven-bar phrase yourself, you’ll appreciate how difficult it is to make it sound like anything other than an eight-bar amputee. However, the seven-bar phrase in ‘Yesterday’ is so well-crafted that if you attempt to rejig it into an eight-bar phrase it just sounds broken, no matter what you try.

The flavour of falling fifths in the harmonic progression is very strong, and I’d argue that it’s one of the key features which unifies the song’s two different musical sections. In particular, bars 2-5 of the verse and bars 1-4 of the bridge both feel to me as if they’re fundamentally based around the same Em-A-Dm-Gm-C-F backbone (and with the same harmonic rhythm to boot), the former only swapping out the G minor harmony with a strongly related Bb major substitute, and the latter simply slotting in a passing Bb maj7 chord halfway through the second bar under the word “go”. To get a feeling for how similar these sections are harmonically, try singing “all my troubles seemed so far away; now it looks as though they’re here to stay” over the first four bars of the bridge — it fits very snugly indeed. But my favourite thing about all this falling-fifths motion is the way that the Bb chord in the final bar of the chorus wilfully bucks the pattern. Closing the verse on a classic vi-ii-V-I progression of Dm | Gm | C | F would have been the path of least resistance within this context, and it’s wonderful the way McCartney twists this pattern out of shape by altering the G chord to its major mode and then proceeding via a IV-I cadence instead.

From a more technical standpoint, it’s interesting to compare the left and right channels of this mix during the opening guitar-and-vocals section. While the right-hand channel is clear as a bell, the left-hand channel is actually rather honky and phasey-sounding. 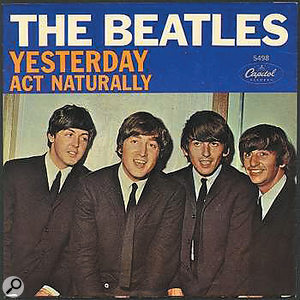 The explanation for this is that the string players didn’t want headphones while overdubbing, so George Martin gave them loudspeaker foldback instead, and its the spill from those loudspeakers that’s colouring the vocal sound in the left channel, as well as shifting McCartney’s voice noticeably off-centre in the stereo image. Overinflated concerns about these kinds of side-effects seem to dissuade lots of project-studio folk from experimenting with loudspeaker monitoring, so I hope that this song helps put such fears into perspective — McCartney’s vocal still sounds great in stereo, and even in mono the phasiness is actually quite benign in practice. Notice also how spill from the original vocal performance (on the right-panned guitar track) can still be heard as a kind of double-track even when the original vocal track is replaced with an overdub for “something wrong, now I long for yesterday” at 0:52-0:59. Again, many SOS readers would probably have recorded the guitar separately in the first place to avoid this — but at what cost to the musicality of the performance?

The decision to use a string quartet rather than a full string section was a great production call for an intimate song like this, and the arrangement also yields a number of hooks in its own right: the rocking motif at “yesterday came suddenly”; the little falling line that leads back into the second verse’s re-entry, and which is later mimicked by the lead vocal; the cello fill after “she didn’t say”, with its exposed seventh; and the five-bar-long high ‘A’ which the violin sustains over most of the final verse. However, I can’t say I like the string sound itself very much — very nasal and buzzy, presumably on account of very tight miking. Some critics will doubtless argue that this rather unnatural timbre actually suits the wistful nature of the lyrics and wards off accusations of mawkishness, and it’s now clearly one of the production’s sonic calling cards (for better or worse), but I can’t help wishing they’d recorded more than about a square foot of each of the instruments in question. And is that the sound of a door creaking at 0:19 on the string track, just before the ensemble enters at 0:22? Tsk! I ask you! No standards in those days... Mike Senior