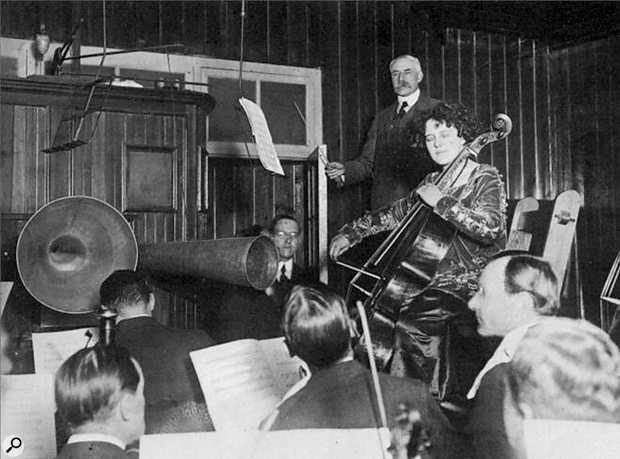 The more serious your responsibilities get, the more important it is to lighten up now and again.

I’m sitting five feet from James Newton–Howard, who is behind the 72–channel Neve 88 RS console in the control room of Studio One at Abbey Road. Next to him is the legendary orchestral recording engineer Shawn Murphy, and at the back of the control room, sitting silently on the sofa, is film director Francis Lawrence.

It is the last day of score recording for The Hunger Games: Mockingjay, Part Two and through the glass, I can see the world’s largest purpose–built recording studio. It’s huge: not only a place of immense cultural and historic importance, but a room way bigger than you’d expect to find this close to central London. Its first studio client was Sir Edward Elgar in 1931 recording with the London Symphony Orchestra. The first time human ears ever heard the music for Star Wars, Harry Potter, The Lord Of The Rings or Braveheart, it was in this room. For people in our game, it’s pretty much the holiest of holies, and today is quite a big deal in its own right: the last full day of production on the last movie in a franchise/cultural phenomenon that has so far grossed over 2.3 billion dollars at the box office. I can’t imagine what this is all costing by the hour, but it’s probably quite a bit.

In between takes, the eight–time Oscar–nominated composer turns to me, and in his hushed Californian drawl, says simply “Show me your socks.”

“Your socks. What kinda socks you got on today?”

“Urrr. I buy them in packets of six.” I stutter. “At Matalan,” I add helpfully.

He pauses and looks blankly at me for a moment, giving me time to make a mental note to remember in future that the co–composer of the score for The Dark Knight possibly doesn’t know what Matalan is.

He nods, then gently rolls his trouser leg up a short distance and turns back to me to with a big smile.

As a full–time jammy bastard and father of two daughters, both of whom are massive Hunger Games fans, I’ve somehow managed to sneak my kids into the control room with me. They are sitting, on their very best behaviour, in open–mouthed amazement at what is unfolding around them.

“Is this your first time in a recording studio?” the composer asks my oldest daughter.

She thinks for a minute before she narrows her eyes, glances over to me, and tells him that her daddy has one but it’s completely crap compared to this one.

I make a second mental note to never meet your heroes in the company of your teenage children. I was close to making a third mental note about removing particular offspring from my will, but the man with 11 Grammy, Golden Globe, Emmy and BAFTA nominations under his belt has something to say.

“Well, kids. You’re gonna see some really important scenes today on this big screen above the mixing desk and it’s important you don’t tell anyone about the film. No tweeting. No spoilers. OK? Promise?”

My daughters nod silently. He gives them both a warm, serious and professional handshake.

“Congratulations, kids,” he says with a grin, cementing himself as the classiest man in the business, “You just sealed your first Hollywood contract.”

He turns back to the mixing desk, pushes the talkback button and says “OK. Let’s go from the top again. We finished early yesterday and managed to get the pub.”

It doesn’t matter what level of this business you work at. You’ve gotta have a laugh now and again, haven’t you?

With thanks to Chris Cozens for sneaking us in.