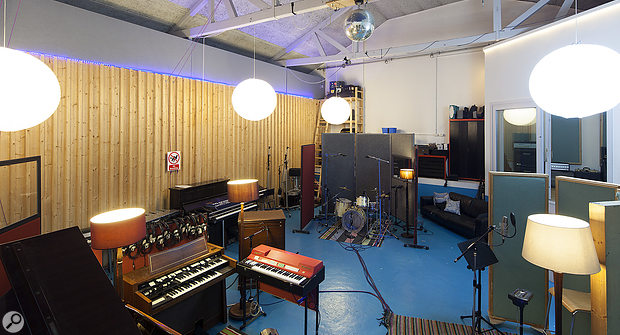 The Pool was originally conceived as a one-room studio, and can be restored to such a state in a couple of hours.

In over 30 years in business, Miloco has developed from a small independent studio to a venture that is operating worldwide. Today, dozens of recording facilities belong to the Miloco Studios group, which also specialises in studio builds and equipment sales. Miloco rooms are spread out all over the globe, from Bali via Iceland and Turkey to the USA, and almost 30 of them can be found in London. In the case of The Pool, however, the recording facilities form an integral part of the company’s headquarters in the South London disctrict of Bermondsey. The space is shared by the Miloco offices, as well as a number of other production spaces including their flagship mixing studio The Engine Room, as well as the writing/production studios The Bridge and The Bunker.

Miloco acquired the building in 2000, and The Pool opened in 2006. Though less than 10 years old, the studio has already undergone a remarkable metamorphosis as well as building an impressive track record, and today it offers a versatile, flexible and unique layout along with a vast collection of esoteric equipment.

Built to house a Sunday school a long time ago, the building afterwards became a warehouse, and was redeveloped into a recording studio in 1986. Built by Tom Astor and named Orinoco, the room that would become The Pool was designed to be used as a TV studio or sound stage. When Miloco moved in they planned to build a recording studio on the premises, but in light of diminishing budgets in the record industry, the idea was put on hold and the room was used for equipment storage until producer and songwriter Ben Hillier came in and fell in love with the space. Subsequently The Pool was launched as a joint venture between Hillier and Miloco. 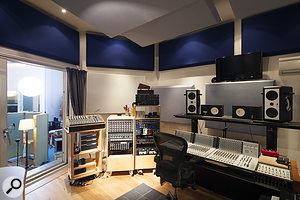 When the studio was remodelled, a separate control room was added. 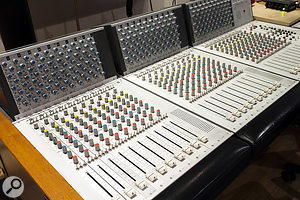 One of the studio’s most distinctive features is the EMT A100 mixing console.In the early days the studio was configured with an open-plan layout, with the control-room gear integrated within the live area. As Hillier puts it, this sort of layout means that “communication is fantastic, and everyone’s in touch with what’s happening. Recording a full band we all work on headphones, we hear what the band hear so it’s very easy to notice anything that might be putting them off their performance.” 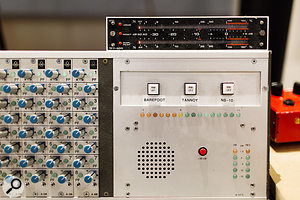 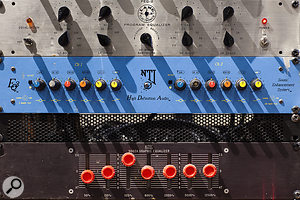 The Pool’s outboard setup includes rare equalisers such as a pair of Lang PEQ2s, an NTI EQ3 and an Altec 9062A.However, despite the benefits of such an unusual approach, some potential clients preferred a more conventional layout, so the studio was remodelled to its current configuration a couple of years later. It now provides a 100-square-metre live area and a separate 30-square-metre control room, as well as a dedicated drum booth which can be converted acoustically from a fairly dry-sounding space to an echo chamber by removing the modular acoustic panels. However, the original open-plan architecture can still be restored within a couple of hours, and the unusually small footprint of the console Hillier chose as the centrepiece for The Pool certainly helps. Hillier acquired the EMT A100 console with 30 channels and eight buses from a studio in Berlin, not only for its preamps but for the summing, which he describes as “really amazing“.

Twisting By The Pool

After the remodelling The Pool wasn’t exactly lacking gear, but received a significant upgrade nonetheless when Swedish musician and producer Johan Ekelund brought in his vast collection of vintage kit, including a rack with nine Neve 1079 and 1272 modules, as well as numerous dynamics and effects units.

Today, The Pool boasts a rich outboard collection which includes both classic studio standards and extremely rare items. In addition to the EMT console’s preamps and the Neve modules, there is an eight-channel Neve 542 desk, a pair of Telefunken/TAB V76 preamps, almost a dozen vintage API modules including the 550, 550A and 560 types, as well as original Pultec MEQ5 and HLF3C units as well as a pair of Lang PEQ2A Program Equalizers. The dynamics department is equally well-equipped, offering not only the ubiquitous Urei units as silverface and blackface 1176LN limiters and an original LA3A, but also a super-rare Universal Audio 175B. Other dynamics processors include a pair of Neve 2254/A modules, the infamous Gates Level Devil and a pair of vintage API 525s, as well as three Tweed Audio CL604/1 modules. 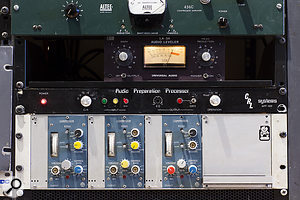 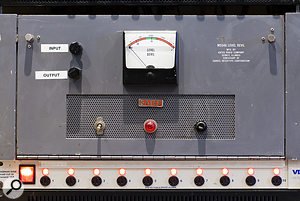 The infamous Gates M5546 Level Devil compressor, not a favourite unit of radio stations in the Bible Belt in the 1950s... 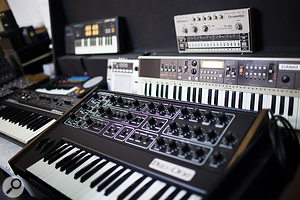 The Pool keeps a large collection of vintage synths and drum machines, including this Sequential Circuits Pro One and Roland TR606.The Pool’s large mic locker doesn’t only hold familiar Neumann classics such as the U47 FET and U87, and the inevitable AKG and Shure standards, but also more unusual models from Heil, Lomo, Earthworks, Bruel & Kjaer and Reslo. And the instrument collection is just as strong: alongside a vast number of vintage Premier, Slingerland and Ludwig drums and an endless list of guitar amps and pedals, the synth collection stands out, featuring gems such as the EMS VCS3, Korg MS20 and SQ10 units, Roland TR808 and Sequential Circuits Pro One.

Despite having been in business less than a decade, The Pool has attracted many notable artists, from early clients such as the Maccabees and the Horrors to the Arctic Monkeys, Depeche Mode, Franz Ferdinand, Graham Coxon, LCD Soundsystem and Mumford & Sons. Recent clients include Florence & the Machine, Plan B, Tom Odell, Bastille and Tvvins. One questions remains: why the name? Well, with the control room located a few steps above the live area, and the live-room floor painted blue, the space looks like a swimming pool...