Behind The Brand By Sam Inglis

In this Behind The Brand interview, René Mørch of DPA Microphones chats to Sam Inglis about DPA's involvement in the NASA Mars 2020 mission and the challenges involved in capturing audio on another planet for the first time. 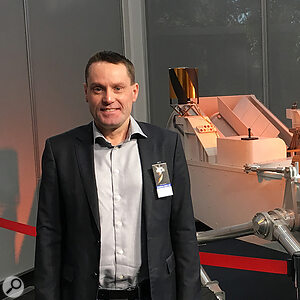 René Mørch next to the Mars Rover

DPA mics became popular across a number of sectors, including the theatre market, who needed a solution that, while still capturing clear sound, was flexible and easily concealable. DPA also collaborated with the Danish hearing aid manufacturer Muphone, who were looking to create better sound in smaller units. DPA minimised the capsule size into a miniature package that was so clear sounding and yet unobtrusive, it could support creative expression on the stage and work began on creating headset versions of the miniature mics. After years of shared success, DPA and Muphone merged in 2005.

Since 2015, DPA has intensified its focus on new product development and has increased its investment into research, creating concealable miniatures, flexible headsets and top-of-the line vocal microphones. CORE by DPA was introduced in 2017 in the miniature lavalier and headset capsules. This preamplifier technology minimises distortion and expands dynamic range.

Each microphone is assembled by hand at DPA's factory in Denmark. During the process, which can take up to 200 steps, each one is calibrated up to 15 times before final approval.

Editor In Chief Sam Inglis has been with Sound On Sound for more than 20 years. He is a recording engineer, producer, songwriter and folk musician who studies the traditional songs of England and Scotland, and is the author of two books: Neil Young's Harvest (Bloomsbury, 2003) and Teach Yourself Songwriting (Hodder, 2006).