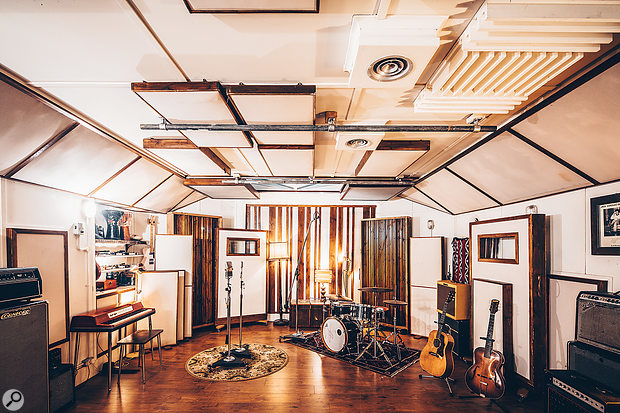 If you want to build a studio in England's capital, you're faced with what Giles Barrett from the Soup Studio team calls the "precarious and brutal rental market of London". When Ben Philips was looking for a new studio space in the early 2000s, he found a novel, nautical solution to this problem: a lightship built in 1939 for Trinity House, a 500-year-old company started by Henry VIII. Classed as a heritage vessel, the all-riveted steel ship was built to endure the harshest of conditions. In Ben's hands, she found a new home at Trinity Buoy Wharf, which remains an island of creative business in gentrified central London. 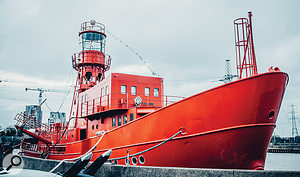 The boat that rocks: Soup is housed in a former lightship moored on the River Thames in London.Converting the ship into a recording studio proved a daunting task. Massive bulkheads and machinery had to be removed, as did no less than 100 cubic metres of spray foam which was put into the bow and stern compartments when the lightship was automated in the 1980s. Over 12 tonnes of steel were cut out during the remodelling process. The control room was installed in what was once the ship's enourmous diesel tank, and the live area now occupies the former machine room. As Lightship 95, the studio opened around 10 years ago and today shares its floating space with an animation studio, a design studio and a print shop; owner Ben Philips also lives on the boat. He ran the recording studio until 2017, when he handed over to the Soup Studio team — Simon Trought, Giles Barrett, Sam Beer and David Holmes, who also had been driven out on to the water by the crazy London property market.

Founded by Simon Trought in 2000, Soup Studio had to leave its original Shoreditch location after the landlord tripled the rent overnight, and found a new home at Canal Street Studios. Here, the tight-knit producer community really grew together. Barrett recalls: "We continued to work in a wide variety of genres, from traditional folk, through to psychedelic rock, modern classical composition and jazz all the way to the avant-garde madness of the Dead Rat Orchestra, who brought a tree into the studio to attack with axes as we recorded them." They crossed paths with Ben Philips at just the right time, and they were able to move Soup Studio in 2017 into the floating space that had been named Lightship 95. Luckily, not much remodelling had to be carried out, as the original design of the studio had proved sound; the Soup team were able to move in their gear during the day and start the first session the same night!

The Soup team were able to move in their gear during the day and start the first session the same night!

Whilst the over-engineered quarter-inch-thick steel hull certainly offered insulation against exterior noise, overcoming resonances and mechanical transmissions inside the vessel imposed a real challenge during studio construction. All studio spaces had to be built as room-within-a-room constructions hanging on neoprene mounts. The only major change that has happened on Soup's watch is the installation of a tiled echo chamber in a cupboard under the staircase. 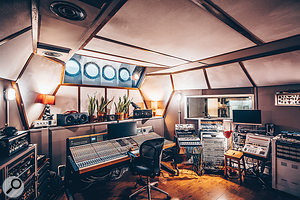 The Soup control room is based around an appropriately British Calrec console. 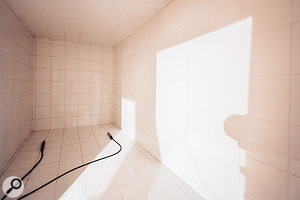 As well as mechanical and digital reverbs, Soup is also home to this echo chamber.The studio space includes the 50-square-metre live area and a 30-square-metre control room, both offering a ceiling height of around three metres. At the heart of the technical setup resides a Calrec S2 console with 48 stereo channels, and the rest of the collection includes studio standards as well as fairly rare bits of kit. An Otari MTR-90 two-inch tape recorder, API 3124 preamp and a Drawmer 1960 stereo channel strip are joined by vintage units such as the Eventide H949 Harmonizer, TC 2240, Intersound PRV-1 reverb and Vermona Phaser 80. Noteworthy is the funky-looking Ekadek Fatlady Vari-Mu limiter. Barrett's favourite bits of kit include a 1954 Gibson J50 guitar and a 1968 special–edition red Wurlitzer electric piano, both owned and lent to the studio by Sam Beer of the Treetop Flyers, and both extremely popular with the jazz clientele. 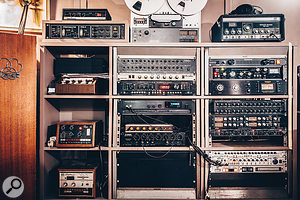 Giles Barrett insists that nautical metaphors are strictly banned on the lightship, but one can only wish that a recording venue as unique, likeable and ambitious as this one does indeed stay afloat in a real estate market not exactly friendly to creative businesses. By the way: clients afraid of potential seasickness need not worry! As the Thames is a tidal river, the lightship rests on the river bed half the time, and, according to Barrett, sessions can easily be scheduled around the tidal calendar, if need be...