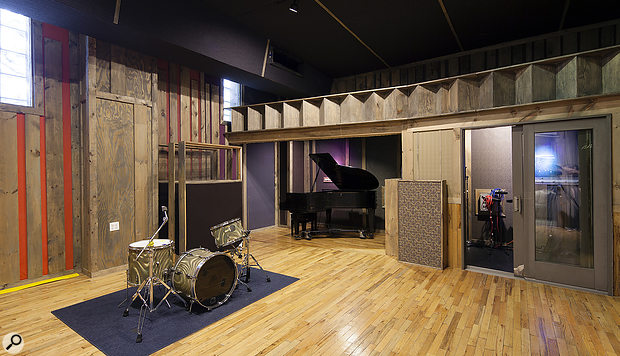 The Studio A live room at Studio G is beautifully decorated with timber reclaimed from the original 19th century building.

Much has been written about the real estate market in Manhattan, one of the centres of worldwide commerce. Relentless gentrification has meant that niches for creative businesses are becoming more and more scarce. Luckily, however, New York has other spaces and opportunities to offer, and the team behind Studio G are among the pioneers who have helped to develop previously uncharted territory.

Today, Williamsburg in the borough of Brooklyn is widely seen as a hotbed of hipster cool, but when Tony Maimone laid the foundations for what has become one of New York’s most interesting recording venues, this wasn’t yet the case. Maimone, bassist with bands like They Might Be Giants and Pere Ubu, was only seeking to create a rehearsal space in the first place, and found his premises right next to a subway station on the ‘G’ line, which lent the venture its name. 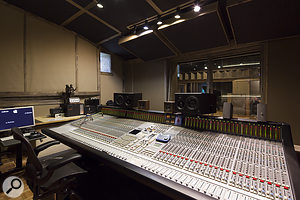 Studio A’s control room features a 48-channel SSL G+ console.Equipped at first with a Soundcraft desk, a couple of ADAT decks and an Otari tape recorder, the place quickly evolved from a rehearsal room to a recording facility, yet when engineer/producer Joel Hamilton joined Studio G in 1999, the neighbourhood was still far from being the tourist magnet it has become in recent years. “At that time you just didn’t ride the G train,” Hamilton recalls. “That was way too dangerous. It may have happened that the only other passenger with you would have been a guy wearing clown’s shoes and a mad grin, suddenly wielding a knife in front of your face.“ However, the tide was about to turn soon. After 9/11, Williamsburg boomed, developing into a vibrant scene for arts and music, and the perfect location for a recording studio.

Studio G remained a one-room operation, though, so it was impossible for Maimone and Hamilton to work on several different projects simultaneously. Eventually they felt they had outgrown the original space, which is now run by a friend under a different name, and secured a new spot large enough for three fully independent studios in a building dating from the late 19th century. Construction started around 2011, with the first new room being open to the public a year later. 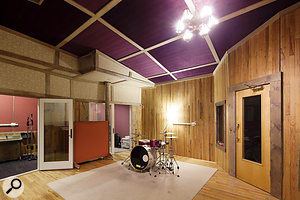 Studio B’s live recording facilities are also very impressive.The building was originally a carriage house for a large Polish bakery nearby; the ground level was used to store the carriages themselves, while the horses would be hoisted to the second floor for the evening after delivering bread in the mornings, because they were lighter than the carriages! According to Joel Hamilton, the original trap door used to be in the space that is now G’s Studio C. 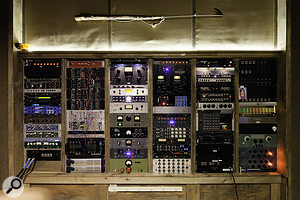 The huge outboard selection in Studio A is guarded by a giant harpoon!Studio A, the largest room, boasts a 50-square-metre space with two additional isolation booths and a five-metre-high ceiling. Both the studio and the adjacent 40-square-metre control room are beautifully crafted with a lot of reclaimed wood from the original construction, and they are home to a rather spectacular equipment collection guarded by a giant harpoon above the outboard racks — having spent the better part of his childhood living near Cape Cod, Joel Hamilton has a fascination with all things maritime. 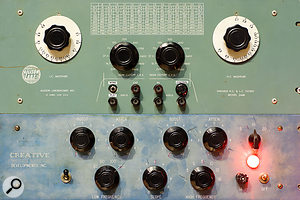 When starting to build his own equipment collection, Hamilton didn’t look at the classics, as he was mostly freelancing in other rooms where standard outboard was widely available. Instead, he focused on the more unusual and quirky stuff he could bring to sessions to complement what was already there. Today, the excellent gear selection at Studio G spans both ends of the spectrum. Studio A boasts a number of current production dynamics units such as a massive ADL 670, Universal Audio LA2A, Chandler Zener Limiter, Elysia Mpressor and a couple of Empirical Labs Distressors, but the racks are also filled with vintage kit: a chunky Collins limiter, an original Gates Sta-Level, Maxson Dept. Of Commerce limiter and a Federal AM-864U with an unusual green paint job. On the EQ front, there’s a rainbow-coloured Blonder-Tongue Audio Baton, perhaps the most unusual-looking valve equaliser in history, some HAECO EQ modules from the original console at A&M, and the list goes on.

Studio G’s mic locker is filled with a similar combination of classics and unique pieces, ranging from Neumann U47, M49, U67 and U87s to a wooden Davisound DS1950 (which Joel Hamilton describes as being like “singing into a birdcage”), an RFT 7151 and a couple of Sage Electronics Bova Balls. 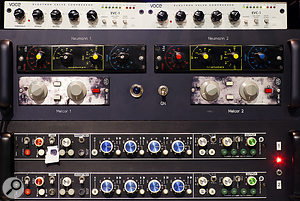 Studio A is built around an SSL 8048 G+ console with 48 channels, while the beautifully discrete Neve 5316 that served as the centrepiece of G’s previous location has now found a new home at Studio B, which is only slightly smaller than the A room. Both units can be combined, with 16 mic tie-lines. Studio C was rented out to third-party producers for a long time, but it will now be remodelled and fully integrated into the Studio G complex. 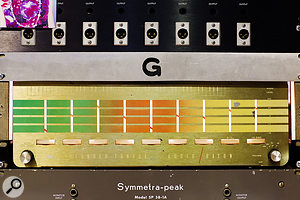 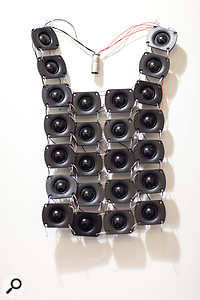 Joel Hamilton wore this tweeter collar in an episode of the web series Art Of Sound.Unsurprisingly, Studio G has attracted a host of high-profile artists. Joel Hamilton wrote music with Tom Waits for his solo project The Book Of Knots and he co-produced and engineered the Blakroc album at the old Studio G, a collaboration between the Black Keys and the cream of east coast MCs, featuring Mos Def, RZA, Jim Jones, Pharoahe Monch and Q-Tip. Recent clients at the new Studio G include Pretty Lights, Odesza, Bonobo, Lettuce, Phillip Glass/Beck, Plastic Ono Band, Aaron Neville and Puss N Boots featuring Norah Jones and many others.