Published 19/1/08
Audio division launch new products
The audio division of the Avid group, which includes Digidesign, M-Audio and Sibelius, have made a number of announcements at this year's NAMM show.

New from M-Audio (www.m-audio.com) is the Profire 2626, a 24-bit/192kHz Firewire audio interface, capable of recording 26 input channels and playing back 26 channels simultaneously. The front of the 1U rackmountable device has gain controls for each of the eight mic preamps (which are the same as those found in the M-Audio Octane), and volume knobs for the 2626's two headphone outputs. On the rear panel, combi XLR ports allow for XLR and TRS jack plugs to be connected to the inputs, while jack outputs serve the eight analogue outputs. Twin ADAT inputs and outputs allow for a further 16 digital connections to be handled by the device, and there's a serial port with a breakout cable that gives further connections for S/PDIF and MIDI inputs and outputs.
Interestingly, the device has got on-board DSP that allows the user to route signals internally, and configure up to eight mixes, so different feeds can be sent to various members of a band, for example. 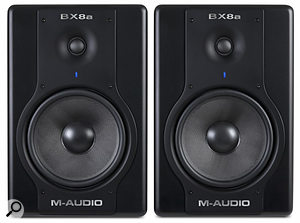 In other news, M-Audio have added to their Studiophile range of compact nearfield monitors. There are two new products that are both 'Deluxe' versions of existing M-Audio monitors. The BX5a Deluxe and the BX8a Deluxe have better low-frequency extension than their predecessors, as well as improved stereo imaging, thanks to re-designed waveguides.

M-Audio have also announced a line of 'console' pianos and have extended the Keystudio range of USB/MIDI controllers with on-board sounds. The company say that the new products feature innovations from other Avid Business Units, including the Advanced Instrument Research group (AIR), whose software instruments and effects have been used inside the new pianos.

Elsewhere inside the Avid group, scoring stalwarts Sibelius (www.sibelius.com) have updated the Student version of their flagship software package. Sibelius Student was, until now, based on Sibelius v3. But with the update, users get some of the benefits of the latest version five. This means, in practice, that users can run their Audio Units and VST virtual instruments inside the software, and use functions such as the ideas hub to keep a record of disparate ideas on the fly.

Sibelius have also launched three new software products designed for young people. The Groovy range, as it's called, gives children graphical stimuli, which helps them to interact with the musical content in the programme, and teaches them the fundamentals of scoring, notation and structure. 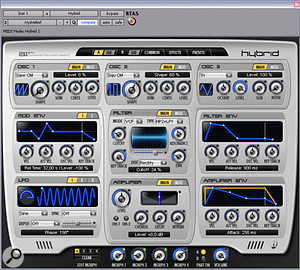 Finally, Digidesign (www.digidesign.com) have announced updates to their Hybrid and Strike virtual instruments. Version 1.5 of Hybrid includes a new Voltage-controlled Filter (VCF), which Digidesign say allows the user to "achieve the classic, retro analog synthesizer sounds of the ’70s and ’80s". Hybrid 1.5 also has new filter saturation modes, giving the user more flexibility when shaping the tone of their synth patch.

Digidesign's virtual drummer software plug-in Strike can now be expanded with a software add-on that brings 300MB of drum machine sounds and 100 new style settings to the software. Both updates will be free to registered Hybrid and Strike users for a limited time.

For more information, keep an eye on the web sites of the respective companies.