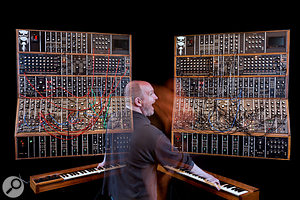 Gordon Reid with Emerson's original Moog Modular on the right, and recreation on the left.It’s an old adage, but one that has once again proved to be true: the best place to hide something is in plain sight. So when the powers-that-be at Moog Music wanted to ensure that their largest, most expensive, and arguably most exciting project since… well, since almost forever, remained a closely guarded secret, they told everybody what they were doing. But they did so on 1st April, thus ensuring that nobody believed them. Within hours, the web surged with headlines such as “April Fools’ Jokes We Almost Wish Were Real”, and the forums were full of comments along the lines of, “Dang it, they got me too” and “Moog is definitely putting more time into April Fools pranks now”. My favourites, however, were, “Hahahahahahahahahaha!” and “April Fools – assholes”. Well, I have news. Moog’s latest synthesizer is indeed a recreation of what is arguably the world’s most famous synthesizer – Keith Emerson’s modular monster, once dubbed “the most dangerous synthesizer in the world”.

You find me in Asheville, North Carolina, sitting in a small studio within Moog’s factory. To my right is Keith Emerson’s mighty modular synth… and to my left is Keith Emerson’s mighty modular synth. Of course, that can’t be true but, to the casual observer, it’s almost impossible to tell which is the original, and which is the clone. Look closely, and you’ll find that the one on the right has a bit of a bash here, a bit of wear there – battle scars that suggest that it may have been on the road since 1970 – while the other is in pristine condition. But the similarities are unbelievable, to the extent that, when presented with both, you start to look for the mirrors. What’s more, this attention to detail is far more than skin deep. Wherever possible, the new synth has been built using original components and, while Moog’s engineers are aware that this may make it difficult (or impossible) to export it to some countries, authenticity was the sole guiding criterion. So, unlike recent re-releases from elsewhere, you’ll find no surface mount chips and miniature equivalents in the new Moog; it’s all solder tags, chunky inductors, massive capacitors, and circuit tracks so wide that you could drive the 7:56 to Paddington along them.

The new Moog (which, at the time of writing, doesn’t even have a name) was still being completed on the day that I arrived in the USA but, being the type of chap I am, I couldn’t resist pulling the two synths into an ‘L’ shape and playing them together. Having patched Wodin’s favourite bass sound on the clone, I selected the Aquatarkus, Welcome S/H, Hoedown and Lucky Man presets on Emerson’s, and proceeded to play excerpts from Emerson Lake & Palmer’s greatest hits. Very badly. But the staff at Moog tell me that I was the first person in the world ever to play two ‘Emerson synths’ simultaneously, and that has been (literally) a unique privilege. And the sound? My god, the sound! But it still leaves a number of questions unanswered, the most significant of which are, “why did they do it?” followed closely by, “will I ever be able to buy one?”. Over the next few days, I’ll be talking to the people behind the project to bring the whole story to you.

The ‘Emerson’ Moog Modular (together with some other, somewhat smaller, goodies) has just been unveiled to the public at Moogfest 2014, which is running in Asheville, NC, from 23rd – 27th April. Gordon Reid