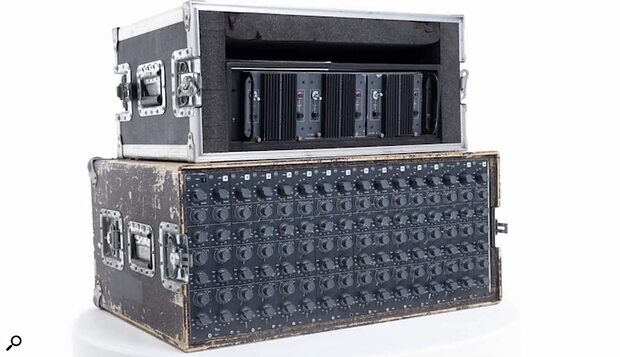 A set of 16 original Neve 1057 microphone preamp and EQ modules from the personal collection of renowned producer, engineer, composer and arranger Michael Beinhorn have been put up for sale. Originally installed in the first Neve 80 Series console handmade by Rupert Neve, which was built for Chicago Sound Studios in 1968 before being sold to Tom Wright in Atlanta, they have been owned by Beinhorn since 1995.

The console was used during the recording of some of the most iconic rock albums of the 1990s and early 2000s, including Marilyn Manson’s ‘Mechanical Animals’, Soundgarden’s ‘Superunknown’, Hole’s ‘Celebrity Skin’, Korn’s ‘Untouchables’ and Ozzy Osbourne’s ‘Ozzmosis’ among many others. The modules have since been removed from the console and fitted into a rack, where they have been rented out for various recording sessions.

The modules were originally fitted in the first Neve 80 Series console, which was handmade by Rupert Neve for Chicago Sound Studios in 1968.

The transistor-based microphone preamps and EQ modules employ germanium transistors and Gardner input and output transformers, and are renowned for their distinctive sound, particular when put to use on recording drums: upon hearing the 1057s for the first time, Beinhorn said he had “never heard such depth, dimension, or impact... as if the drums were jumping out of the speaker.”

The current rack that houses the modules comes complete with a flight case, three later-design Neve console power supplies (in their own separate flight case), cabling, and a patch bay. The rear of the unit is also equipped with an on/off switch for 48V phantom power. The sale is being overseen by online auction site ANALOGr, and are currently estimated to reach a final sale price of somewhere between $250,000 and $350,000!