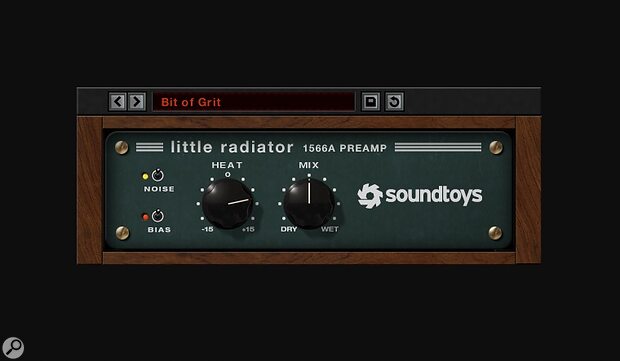 Soundtoys are currently offering their Little Radiator modelled microphone preamp plug-in as a free download for a limited time.

The plug-in is a simplified version of the company’s Radiator processor, and is modelled on Altec’s 1566A preamp. Soundtoys say that Little Radiator breaks up in interesting ways when driven, and is capable of delivering instant 60s Motown vibes when being used to add some character to vocal and instrument recordings. The amount of drive is controlled by a Heat parameter, and the plug-in also features a dry / wet Mix control to blend between the processed and original sound.

Some further sonic grit is provided by a Bias switch, which is said to offer a slightly choppy, misaligned sound that works well for creating lo-fi drum or vocal sounds. A Noise switch is also present, allowing users to recreate the noise added by the original hardware.

Little Radiator is being offered for free, instead of its usual price of $79, until 2 January 2023. The offer can be redeemed via the store on the Soundtoys website by entering the code HOLIDAYHEAT during checkout.