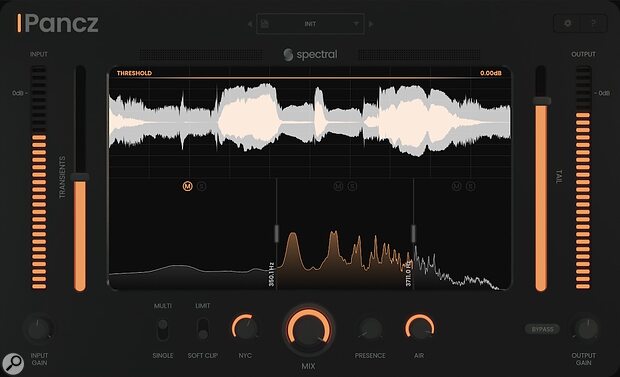 Spectral Plugins have announced the release of their first plug-in Pancz, a multiband transient shaper that Spectral say is also capable of acting as a clipping tool, waveform analyser and tone manipulation device.

The plug-in’s interface is centred around a large waveform display. Dedicated Transient and Tail sliders are placed on either side which shape the incoming sound, with the waveform graphic updating to reflect their settings and provide visual feedback of their effect. Input and output meters are provided, each equipped with their own gain control to allow level matching. A horizontal line through the waveform display offers a way to set the threshold for Pancz’s built-in limiter, which offers two modes of operation, Limit, and Soft Clip. The former has been designed to be as transparent as possible, with the latter intended to introduce some distortion.

A Multi switch splits the incoming signal into three frequency bands for multiband processing, with their crossover frequencies displayed underneath the waveform display. Users are able to set the crossover frequency by clicking and dragging the vertical lines that separate the bands, and each one can have it’s own independent Transient and Tail settings applied. Each band is also equipped with mute and solo functions for auditioning the signal whilst applying settings.

An NYC control applies parallel compression to the signal, and some global EQ options are available in the form of Presence and Air controls, which provide a boost to the upper-mid and high-frequency ranges respectively. Lastly, a Mix control provides a master blend control between processed and unprocessed signals. A range of presets are included, and can be accessed and auditioned via a menu at the top of the GUI.

The plug-in is available in VST2, VST3, AU and AAX formats on both the Windows and Mac platforms, with the VST and AU versions compatible with Apple’s M1 processors.

Pancz is available now from the Spectral Plugins website, and will be priced at $45 until 22 August 2022. After this introductory period, the price will rise to $75.