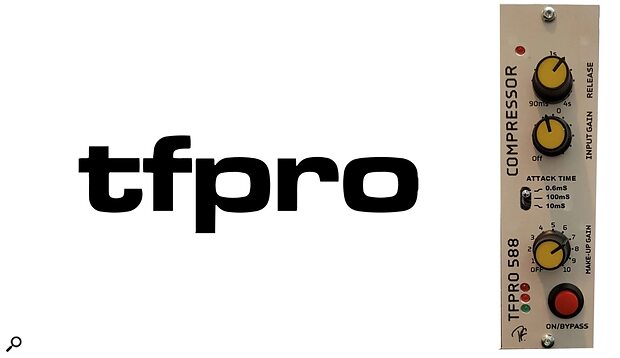 British audio equipment manufacturer TFPro have announced the release of the 588, a new 500-series compressor. Utilising a feed-forward design, rather than the feedback type employed by many analogue compressors, TFPro say that the 588 eliminates compression ‘overshoot’ when using fast attack times.

The focus of the module’s design is on the speed and ease of use, with TFPro saying that the controls on the unit are “few and simple”. The compression ratio varies with the input level, negating the need for a dedicated ratio control, and the overall compression effect is controlled by adjustment of the input and make-up gain controls, as was common with early analogue compressor designs. Attack time is switchable, with a three position switch offering 0.6, 10 and 100ms settings, and release time is continuously variable between 90ms and 4 seconds.

The 588 is available now, priced at £315 including VAT. More information along with some audio demos are available on the TFPro website.