A step in the right direction Skip to main content

A step in the right direction 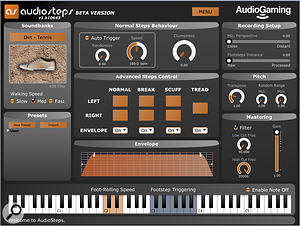 AudioSteps from AudioGamingFrench plug-in developers Audiogaming have only been around for 18 months but have already drawn the attention of Hollywood sound designers. One of their first products, AudioWind was used in the making of Quentin Tarantino's Django Unchained.

Thier latest product, AudioSteps, uses advanced real-time audio manipulation tools, coupled with a library of over 100,000 samples to recreate a variety of footstep sounds for sound design. The product features six different types of shoe walking on seven surfaces, with 40 variations of each sound type. Real-time parameter adjustment is possible for settings such as perceived distance from the microphone and clumsiness.

For more information from the makers of AudioSteps, read on.

Press Release: Following wind, rain and engine sounds, AudioSteps comes in. Footsteps sounds come to life with subtlety and variations at your Fingertips!

Pursuing its continuous product offer expansion, Audiogaming is releasing its fourth audio plug-in in only 18 months! After AudioWind, AudioRain and AudioMotors, AudioGaming will release in early April its new AudioSteps plug-in. It is based on Audiogaming’s advanced real-time audio manipulation tools, coupled with a large and high-definition footstep sound library recorded on purpose with DPA precision microphones (more than 100.000 files were recorded to produce AudioSteps). The library includes large numbers of high quality recordings per combination, 7 surfaces and 6 types of shoes allowing real-time adaptation of sounds to fit most of audio post-production needs.

Some Sound design tasks are so demanding that they require very specific tools. AudioGaming develops innovative plug-ins which offers groundbreaking possibilities for audio professionals as well as semi-professional. They have been used successfully in the most demanding context, from Hollywood block-busters to innovative video games.

AudioSteps, the latest plug-in created by Audiogaming has been eagerly awaited by Sound Designers to respond to nowadays constraints. It offers instant sounding of any media material involving footsteps. Available in most standard industry formats (Mac/PC, VST/RTAS/AU), AudioSteps offers a impressive wide range of controls that allow sound designers to shape their footstep sounds to match almost any kind of situation. Coming by default with around 40 variations for each footstep sound type, professionals have instantly access to over 20 combinations plus additional presets creating endless possibilities. AudioSteps has a unique feature that enables sound designer to adjust the virtual recording microphone perspective as well as the perceived distance. It also includes the possibility of adding additional footstep databases that will soon populate our catalog as well as the unique possibility of requesting custom databases specifically tailored to specific needs and specifications.

AudioSteps will be available in two flavors: free with no limitations but with only one databanks, or commercially licensed like other plug-ins with a complete databank set covering everyday needs.