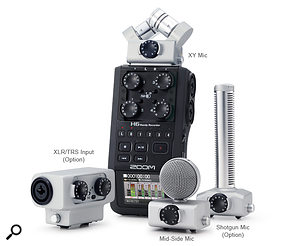 Zoom H6 portable recorderZoom announced a new 6-in, 2 out handheld recorder at Musikmesse, called the H6, which can record up to 24-bit, 96kHz audio. Zoom already has a track record of producing high-quality handheld audio recorders with their H4n and H2n devices.

The H6 really stands out with its interchangeable capsule system. The H6 ships with two different capsules – an XY coincident pair and a Mid-Side mic, for continuously variable stereo width. There are also two extra attachments that can be purchased separately: an XLR/TRS Input, which offers two more inputs for external mics, and a shotgun mic.

There are four XLR/TRS combi inputs on the body of the H6, so adding the XLR/TRS Input option would allow six external microphone to be used, which could be very useful in location recording situations.

The H6 is battery powered and Zoom claim over 20 hours of operation is possible on a single set of four AA batteries.

There are limited details available about shipping dates and price, but we will bring you full review as soon as we can get hold of one.