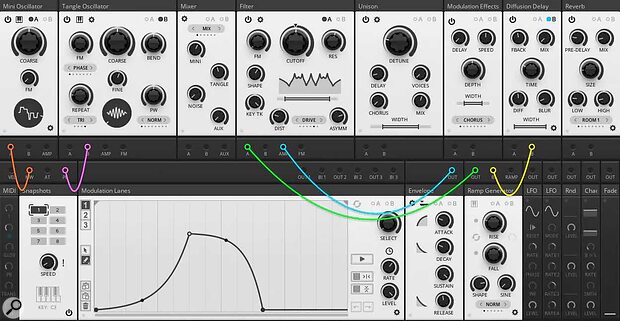 Toybox Audio have released Tangle Synth, a semi-modular software synthesizer for Native Instruments’ Reaktor Player. Based on the company’s Reaktor Blocks packs, Tangle Synth features a GUI inspired by popular classic hardware monosynths, and provides a patching strip for simple routing of modulation sources. Further versatility is provided courtesy of Reaktor’s Structure view, which offers fully modular patching between all of the instrument’s sections and allows users to integrate Blocks from other Reaktor packs.

Tangle Synth features two oscillators, which are capable of modulating each other using a variety of FM modes. A basic Mini Oscillator allows users to morph between seven different waveforms, and is equipped with an FM knob which offers four selectable modes of operation, whilst a Tangle Oscillator combines phase distortion with FM synthesis, and offers seven lo-fi modes which authentically model vintage digital converters.

An analogue modelled filter follows the Mixer section, and is equipped with eight filter types which can be morphed between, and have their order arranged via the block’s Options panel. Low-pass, band-pass, high-pass, two notch, six notch, two notch inverted, six notch inverted, and comb filter types are available, and there are eight different analogue models available, again selectable from the Options panel. In addition to the filter types and models, the section also offers six styles of distortion which can be placed either before or after the filter.

The lower half of the instrument's GUI is dedicated to modulation sources, with the instrument boasting an ASDR envelope, Ramp Generator, LFO, and Quad LFO sections, all of which can be assigned to the upper modules via the central patching strip. A Modulation Lanes section also offers three multi-breakpoint modulation lanes within a single block, which can be synchronised with the host’s playback tempo or triggered by MIDI.

Tangle Synth runs in Native Instruments’ Reaktor Player, which is available as a free download from the Native Instruments website. It is supported on PCs running Windows 10, and Macs running macOS X 10.14, 10.15, or 11. VST, AU, and AAX versions are available.

Tangle Synth is available now for an introductory price of $29, at the end of November 2022, the price will increase to $45.