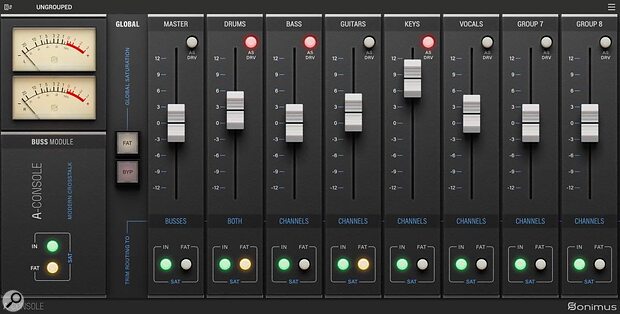 Sonimus have announced the release of A-Console, a console emulation plug-in inspired by the API 1608. Intended for use on every individual track and bus within a DAW session, A-Console promises to deliver a wide range of tonal characteristics that will help users to add character to their mixes.

A-Console's Channel Module offers a level control, high- and low-pass filters, saturation and crosstalk controls, and a virtual VU meter.A-Console comes as a single plug-in and features two switchable modes: a Channel Module which is intended for use on individual tracks, and a Buss Module designed for use on group or bus channels. The Channel Module is equipped with a fader to set the signal level, and also provides High Cut and Low Cut controls which offer 6dB/octave low- and high-pass filters. A Push button reduces the dynamic range and increases the level of the channel’s signal, providing 5 and 10 dB settings and offering a way to achieve soft clipping. Sonimus point out that the setting should be used with discretion, as its overuse can result in a mix with a lack of dynamic range.

The amount of saturation applied by the plug-in can be controlled by a pair of buttons placed below the filters, and can either be bypassed entirely via an In button, or increased to exhibit a more obvious distortion effect though the use of a Fat button. There are also three settings which alter the amount of crosstalk introduced between channels, with a subtle effect provided by a Modern mode, a more obvious effect offered by a Vintage setting, and an Off setting removing crosstalk entirely. A Trim As Drive function can be accessed by right clicking the background of the GUI, and when engaged will automatically attenuate the plug-in's output as the gain is increased, effectively allowing the fader to be used as a drive control.

The Buss Module is equipped with A-Console's saturation and crosstalk settings, but removes the fader and filters found on the Channel Module. There are also calibration settings for the plug-in's VU meter, along with options for assigning multiple A-Console instances into groups for simultaneous control. Once assigned to these groups, a single Master Grouping view can be used to alter the level and saturation settings of all corresponding channels.

A-Console is supported on PCs running Windows 7 and above, and Macs running macOS X 10.9 or above, with both Intel and Apple Silicon processors supported. It is available in VST2.4, VST3, AU, AAX, and RTAS formats.

A-Console is available now, and is currently being offered for an introductory price of $39, reduced from its full price of $49.